After years of uncertainty, the survival of St. Ann's Chapel is assured. 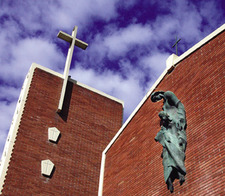 When Brokaw’s grief-stricken stepfather insisted that her obituaries call him her father, as she had done, the media obeyed. It’s not surprising: he was Henry Luce, founder of the Time-Life empire. Brokaw’s mother was playwright, congresswoman and ambassador Clare Boothe Luce.

At first the couple wanted to endow Stanford with a chair or lectureship or perhaps a music room in Brokaw’s name, but negotiations dragged on for six years. Stanford hoped for more money, while Clare Luce complained that the University was treating her like “a large foundation instead of an individual,” according to Armando Trindade, PhD ’71, in his dissertation “Roman Catholic Worship at Stanford University: 1891-1971.”

“To Clare the news [of the death] was the end of life, here and hereafter. The shock was so great, her grief so deep, that it seemed she might lose her mind,” biographer Alden Hatch writes in Ambassador Extraordinary (Henry Holt, 1956). Urged to seek solace from the magnetic Monsignor (later Bishop) Fulton Sheen, she challenged him: “If God is good, why did he take my Ann?” Sheen’s response launched months of intense discussion, and Luce became a Roman Catholic in February 1946. With her attempts to endow the University failing, she decided instead to erect a chapel on Melville Avenue, next to Norris House, home of the Catholic students’ Newman Club.

Dedicated in 1951, the sanctuary is a modest treasure of postwar art. Luce, a collector and Sunday painter, told architect Vincent Raney that she hoped to make St. Ann’s “as much of a gem in a small way as is Father Couturier’s in France.” She was referring to the French revival of religious art then under way; the model she had in mind was Notre Dame at Assy, where Dominican priest Pierre Marie-Alain Couturier had commissioned 15 eminent modernists to make murals, tapestries, mosaics and stained glass.

Luce brought the noted painter André Girard from France to create life-size stations of the cross and paintings on the glass windows—“painting on light,” he called it. “André thought that painting on glass would revolutionize the whole liturgical glass business,” says John Kysela, a Bay Area art publicist and historian well-acquainted with the church’s artwork. “He thought it would outlast medieval stained glass. It didn’t.” Today, the peeling panels desperately need restoration. Girard’s artistry was better than his chemistry.

Still, he tackled the job with enthusiasm. “If Clare had let him, André Girard would have painted everything here, including the ceilings,” says Kysela. Girard’s creations reflected his religious perceptions. “He saw Jesus as a radical rabbinical teacher, [given] his own unusual compassion and love for the outcasts in society,” says Kysela. Indeed, Girard, who had been a Resistance leader, often emphasized demonic faces when painting crowds, and sometimes they wore Nazi helmets. World War II had given the religious art revival its impetus, as leaders began rethinking theology in view of the Church’s passive, if not complicitous, wartime role.

At St. Ann’s, each window panel is dominated by a different color—red, blue, green or yellow—although their differences have faded. A similar chromatic scheme tints the stations of the cross, angled with alternating windows to illuminate them.

In his dissertation, Trindade quotes Catholic philosopher Jacques Maritain on Girard’s work. “Never perhaps has he represented [the stations of the cross] with so powerful a rhythm and so fascinating a pictorial eloquence as in the chapel of Palo Alto.”

Near the altar, a mosaic by Louisa Jenkins of turquoise, lapis, shells, glass, gold leaf, stone and ceramic depicts a Madonna with a rosary. The California artist was a close friend of Clare Luce. Jenkins also composed the mosaic-on-steel-mesh baldachin over the altar, featuring angels with Picassoesque faces. Hanging on the wall above the chapel doorway is a large bronze sculpture (artist unknown) of St. Ann protectively guiding her daughter, St. Mary—a spiritual counterpoint to Luce and her Ann.

Their relationship was fraught with pain well before Brokaw’s death. Luce kept a hectic social and professional pace, leaving her daughter to grow up almost without a mother. Brokaw’s letters show a lonely, unhappy girl struggling to reach her mother through a phalanx of receptionists, publicists and secretaries. The fashionable Luce complained that Brokaw was unattractive and didn’t know how to dress. Tall and shy—and described by those who knew her as unspoiled and sympathetic—Brokaw took on the impossible task of trying to live up to her famous mother.

Then, after Brokaw came to Stanford, the ice melted. As biographer Ralph Martin puts it in Henry and Clare (G.P. Putnam’s Sons, 1991), Luce fell in love with her daughter. “Clare now felt that she could talk to her daughter about almost anything . . . this was somebody who loved her more than herself, more than anything.”

The small chapel has had a bumpy history in recent years. The Diocese of San Jose decided to sell it in 1998, along with the Norris House, designed by Birge Clark, ’14, to finance the new Parish of St. Dominic on campus. Concerned that a sale would negate Luce’s intentions, the Henry Luce Foundation bought the chapel, while the house was sold to a Silicon Valley executive. The foundation then leased the church to the Thomas Merton Society, a liberal Catholic congregation that hoped to eventually buy it. The $1 million price tag proved too much for them, however.

This spring, St. Ann’s was sold to the Anglican Province of Christ the King, based in Berkeley. The conservative church, headed by Archbishop Robert Morse, favors a return to the 1928 prayer book and a restoration of older customs and practices.

The purchase is, as Morse might say, a providential one. His wife, Nancy, ’42, was Brokaw’s “big sister” in the Kappa Kappa Gamma sorority at Stanford. He grew up on the Peninsula and says he’s “loved St. Ann’s for 50 years.”

Morse credits the Thomas Merton Society with saving the chapel and says he’d like to see the church “go on doing what it’s been doing.” He sees St. Ann’s Choir, which performs Gregorian chant, as a treasured musical tradition to keep alive.

“I want that place to be used and loved,” Morse says. “I also want to keep the intention for which it was built. It’s a poignant story—a story of love.”

Cynthia Haven is a Northern California writer who covers arts and letters for Stanford.

Marilyn Wann is fat. Got a problem with that?

A Freshman Takes the Title