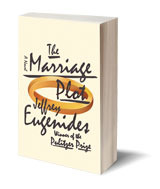 To follow his prize-winning Middlesex, Eugenides updates the story line of the great 19th-century English novels with a tale about American college grads in the 1980s. Madeleine, a Brown University English major who is unfashionably unsmitten with Derrida, has two suitors. Leonard, a would-be Einstein, is charismatic/alienating according to the dictates of his manic/depressive diagnosis. Mitchell, a wisdom seeker who volunteers at Mother Teresa's hospice in Calcutta, believes he is Madeleine's destiny. Clever and ultimately surprising, the novel examines love in the time of ambition, feminism, globalization and sexual freedom.

Brinkley, a visiting professor in the communication department, first reported in Cambodia in 1979 when almost nothing was being revealed about the despotic Khmer Rouge. Decades later, this grindingly poor nation—so relentlessly grasped by corrupt autocrats—has an incidence of post-traumatic stress disorder perhaps unprecedented in history. He writes a sad history of a populace conditioned to expect nothing more than the nothing they have: people who "hold no dreams" except to be left alone.

A young political scientist in search of tenure thinks his ticket will be the study of small-town radicals who'd like the Pacific Northwest to secede from America. Scanlon Pratt has boundary issues, though, and an East Coast-loyalist wife—and they are as likely to make things blow apart as the anarchists he befriends. Scribner, a 1995-97 Stegner fellow, explores desire and betrayal in this academic novel—especially in his characterization of trailing spouse Naomi, a scent professional whose nose is as precise as a polygraph.

Gamel, an ophthalmologist in Louisville, Ky., collects 17 astringent essays about his life in medicine, in-cluding a prize-winning one, "The Elegant Eyeball." In writing that is often as darkly funny as The House of God or as insightful as Complications, this memoir reveals the emotional complexity that mucks up hospitalizations as persistently as hearts beat. Especially notable is Gamel's regard of the passion with which addicted patients pursue their toxins.

This young-adult novel examines the hurdles faced by impoverished teen girls in South Africa. Bright and responsible, Khosi is growing up with her mother, grandmother and younger sister in a community devastated by AIDS and gangsters. She's torn between traditional beliefs and modern ambitions—and Powers, writing her second novel, makes it clear that Khosi's circumstances permit no facile answers.

Solomon: The Lure of Wisdom, STEVEN WEITZMAN; Yale U. Press, $25.

Long before (around 960 to 920 BCE, say) Faust sold his soul, the figure who possessed all knowledge was the king/alchemist/parable-monger Solomon. (And did he do some bartering to get Jerusalem built?) Weitzman, a professor of Jewish culture and religion, writes an "unauthorized biography"—that is, an anecdote-rich one that consults many secular and religious sources other than the Bible

"Marriage has become a marker of status and achievement."

Putting Philosophy to the Test

A new breed of thinkers takes the search for wisdom to the street.

Thank Him for Coolers

Which Strikes the Better Tune, Chopsticks or Spoons?: Essential Answer