She Saw It Coming

Long before the meltdown, Brooksley Born rang the alarm. 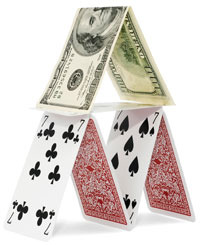 For Brooksley Born, the temptation to say, “I told you so” must be very strong indeed.

Born, ’61, JD ’64, the former chair of the Commodity Futures Trading Commission, warned as early as 1997 that unregulated trading of so-called “over-the-counter” derivatives presented a serious threat to the financial system. In congressional testimony and in private meetings with the Fed chair, Treasury officials and Wall Street regulators, she pushed hard against the prevailing anti-regulation opinion at the time, to no avail.

The market that finally collapsed was built on a complex web of investment contracts known only to the parties involved. There was nowhere near enough capital to back up the debt obligations contained in those contracts, so when housing values caved, they took the hedge funds with them, and the same investments that had helped drive Wall Street’s ascent contributed to its stunning reversal.

Born continued to make her case even after leaving the CFTC in 1999. In an interview in 2003, not long after the collapse of Enron, Born repeated what she had said six years earlier: that the lack of transparency in the “dark market” was a disaster waiting to happen. By then, epically successful investor Warren Buffett was sounding off as well. In a letter to Berkshire Hathaway shareholders in 2002, Buffett wrote “derivatives are financial weapons of mass destruction, carrying dangers that, while now latent, are potentially lethal.” Nobody listened.

This would make Born an interesting person to interview even if the rest of her career had been ordinary. But Born was a legal pioneer before she ever set foot in the CFTC job. In an era when few women were in the law, she rose to partner at a leading Washington, D.C., firm, helped launch public interest advocacy on a range of issues, and inspired a generation of female lawyers.

Now retired, Born had turned down several media requests to talk about her CFTC days in the wake of the meltdown in the financial sector. When I called her to ask if she would agree to be interviewed, she was reticent. Thankfully, she agreed to let us tell her story—all of it, not just the part about trying to save the economy from ruin.

Born did not need to point fingers—the facts surrounding the debate over regulation and the subsequent tsunami that hit the credit markets make clear who was right and who was wrong.

What struck me most about her story was not that she was prescient about the danger represented by the vast, shadowy derivatives market, but that she was so confident she was right, even though several powerful Washington figures rallied to oppose her. That requires courage, and I would have admired her stubborn conviction even if she had been proved wrong.

After all of the pain this recession has caused, I suspect she wishes she had been.

What Good Are the Humanities?

Why they clash with U.S. culture today, and why they matter.

Only a pro baseball deal could lure gridiron MVP from football.