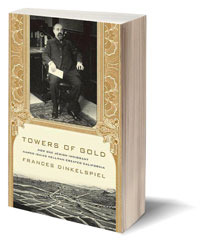 Ours is not an economic climate in which bankers are getting much love, so it’s good that Towers of Gold (St. Martin’s Press, $29.95) offers some historical perspective. A 1914 magazine quoted by author Frances Dinkelspiel noted that bankers fail to get their due as empire builders. “The banker is the refined means by which capital is moved accurately from one trade to another. It is he that turns an endless procession of written promises into money as though they were precious stones.” Isaias Hellman, the article said, “was born a banker.”

Dinkelspiel, ’81, writing about her great-great-grandfather, gives his biography the subtitle: How One Jewish Immigrant Named Isaias Hellman Created California. She supports that claim by showing how Hellman participated in developing Los Angeles, building the financial districts in both L.A. and San Francisco, funding trolley systems, owning what would become one of the state’s richest oil deposits, and making Wells Fargo Bank the powerhouse it remains. He was instrumental in rebuilding San Francisco after the 1906 earthquake. His descendants include the eponym of Florence Hellman Dinkelspiel Auditorium, the patrons who educated violinist Yehudi Menuhin, and investor F. Warren Hellman, the banjo-playing San Francisco billionaire who gives the city its Hardly Strictly Bluegrass Festival each year. Quite the legacy for a boy who emigrated from Bavaria at 16.

At 22, Hellman opened a dry goods store in Los Angeles on April 15, 1865, the day Lincoln was assassinated. The store had a safe, and he stored gold free for his customers until he realized the insecurity of that system. (A drunk accused him of stealing the gold the drunk had mindlessly withdrawn.) Hellman started a proper bank, and when a bank run threatened it in 1893, he piled $500,000 of his own “gold coin on the mahogany counter, in plain sight of worried customers” and quelled a panic that could have sunk the state’s economy.

Brooksley Born warned that unchecked trading in the credit market could lead to disaster, but power brokers in Washington ignored her. Now we're all paying the price.

Olympian Focuses on the Here and Now

She Saw It Coming

Long before the meltdown, Brooksley Born rang the alarm.