When Michael Tubbs kicked off his campaign for Stockton City Council last February, he reached, as he often does, for a Biblical allusion, this time the story of David and Goliath.

What better way to describe a 21-year-old college senior’s campaign to defeat an incumbent more than twice his age in a city crushed by failing finances, rampant crime and a far-flung reputation for failure?

But seven months later, Tubbs, '12, MA '12, now 22 years old, looks like he may be an emerging giant. He defeated his opponent in the June primary, winning the support of 56 percent of the voters, not to mention the backing of one of the world’s most famous women—Oprah Winfrey.

The two met on campus last spring when Tubbs was one of a pair of students invited to lunch with the media maven. When someone mentioned the campaign in passing, Winfrey was all ears, asking Tubbs why he was running, what he planned to do, whether he could really win. By the end of the meal, Winfrey was ready to send a check—something she made clear she almost never does. 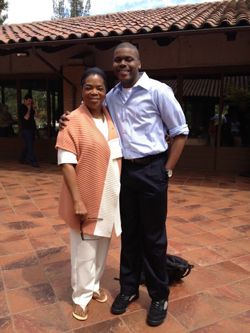 The check for $10,000 arrived a few weeks later, prompting news outlets from Black Entertainment Television to ABC News to take another look at Stockton, whose brushes with national attention were invariably much more negative. But more importantly, the donation got local voters talking.

Tubbs had a real campaign long before meeting Winfrey. Some 200 people watched his kick-off speech, no small feat early in a municipal election. But to others, he was an unknown kid vying for a say on some very adult-sized problems: In 2011, Forbes named Stockton the most miserable city in America for the second time in three years.

Winfrey’s endorsement was the kind of feel-good news the city was starved for: a 21-year-old native son with the stuff to wow one of the world’s most famous women. It was a reason to  notice Tubbs.

“He’s been able to a make a lot of inroads quickly because of that,” says Stockton teacher Larry Hernandez, a Tubbs supporter whose own interest was piqued by the endorsement.

The Oprah connection was just the latest unlikely twist in a life replete with them. Born to a 16-year-old mother and a father who has been incarcerated virtually Tubbs's entire life, Tubbs avoided the pitfalls common to Stockton thanks to family, school, basketball and church, where his grandmother Barbara Nicholson says he effortlessly soaked up the scripture that now dots his speeches. “Even when my mom didn’t want to go to church, I would go to church,” Tubbs says.

He excelled in high school, winning a national essay contest with an account of meeting his imprisoned dad at age 12: “The first time I saw my father, he was chained,” it began. But he arrived at Stanford so uncertain of his place that he deliberately missed his freshman convocation. A guy from the ’hood was not “Stanford”—of that he was sure.

His fear soon melted, as he recalled another Biblical story—Joshua preparing to lead the Hebrews into the Promised Land, and hearing God say that everywhere Joshua’s feet trod, He had given to him. In that thought, Tubbs found comfort that Stanford had been given to him. It was his responsibility to take it for everything it was worth.

Four years later, Tubbs was the featured speaker at the very convocation he had been too frightened to attend, giving a rousing speech about his Stanford awakening that has since garnered more than 4,500 hits on YouTube. “I purposely had my family leave our house in Stockton, California—only an hour and a half away—late so that I would miss all our Welcome to Stanford festivities, as I was scared,” he told the freshmen and their families. “Feelings of inferiority and not belonging are normal, but they are also false.”

By graduation, Tubbs’s résumé positively gleamed with accomplishment: Truman Scholar, Rhodes finalist, White House intern, Google intern and president of Stanford NAACP. He won the Stanford Alumni Association’s Outstanding Achievement Award for impact on the campus community, and the University’s Dinkelspiel Award for combining academic achievement with contributions to student life. And he founded The Phoenix Scholars, a nonprofit that has helped hundreds of high school students get into college.

Such a graduate has tremendous opportunity. Few would have blamed Michael Tubbs if he’d walked away from Stockton and never looked back. Even his family was dubious when he announced his intention to not only come home, but to try and fix home. Tubbs, however, says he has had coming back on his mind since teaching at his old middle school during his freshman spring break.

Until then, he says, he’d been focused on amassing the credentials for life on Wall Street or some other materially enticing end. But being in the classroom made him realize his power to help Stockton, he says.

“Coming back home really centered me,” he says. “It was like ‘no, it’s actually about how do you use this education to impact other people. It’s about using Stanford for something other than me.’”

As one of seven council members in a city where most of the power lies with the appointed city manager, Tubbs knows he would have limited direct influence on his major concerns for Stockton—the endless crime, disappearing jobs and scarce opportunity for youth. But a seat on the council would allow him to build coalitions, set goals, meet new people and champion ideas that could set the stage for solutions, he says.

“It requires creativity,” he says. “For a lot of problems, it doesn’t get worse than Stockton, which means there has never been more opportunity to enact change and help people.”

Savon Lam, 35, is a believer. She’s been impressed with Tubbs since her kids brought him to her attention early in his campaign. The mother of four children ranging from 6 to 17, Lam is passionate about reducing violence in Stockton, which has the second-highest violent crime rate in California.

Tubbs knows the nuts and bolts of violence intervention programs that have worked elsewhere in a way other Stockton politicians don’t, she says. “I definitely saw Michael was more involved and he really knew what was needed. He’s from the neighborhoods. He knows from experience what he’s talking about.” 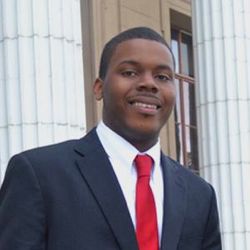 Tubbs’s message has clearly resonated. The $10,000 from Winfrey is part of $50,000 he’s amassed from mostly small donations. His primary win over incumbent Dale Fritchen came despite the fact that Tubbs had spent the preceding months dashing back and forth between cities, finishing at Stanford and campaigning in Stockton.

Victory in November, however, is not assured. Under Stockton municipal code, the top primary candidates move onto a citywide rematch where voters from across the city—not just those from the candidate’s district—will decide the outcome. Tubbs must beat Fritchen one more time.

That transition from district primary to citywide election has often been hard for challengers in Tubbs’s district, says Bob Benedetti, a political science professor at the University of the Pacific in Stockton. It remains to be seen how well Tubbs’s reputation travels outside his district, he says.

This summer, Fritchen was the sole member of the council to vote against the city's filing for Chapter 9 bankruptcy, a decision that made Stockton the largest American city ever to take that step. Benedetti says Fritchen’s one-man stand may cost him support or expand it.

Tubbs, meanwhile, is working with the expectation of victory, keeping up a full schedule of walking precincts, hosting open houses, leading phone banks and amassing a social media following around the hashtag #ReinventStockton.

But regardless of what happens in November, Tubbs already has a legacy that many people go a lifetime without matching. Late on a Thursday afternoon last month, as he finished his day working as the community involvement coordinator at UOP, a student sitting outside noticed him walking by.

Star-struck Zubair Amin, an 18-year-old from Sacramento, tentatively asked if he was Michael Tubbs, saying he recognized him from the newsletters Tubbs sends out through the Phoenix Scholars program. Amin, a first-generation college student, told Tubbs that without that program, he would never have been standing on UOP’s campus. Kids from his high school never went to colleges like that.

‘I Want Her Inside the White House.’

Declining a possible run for U.S. Senate, Valerie Jarrett stayed where the president needed her most: nearby.