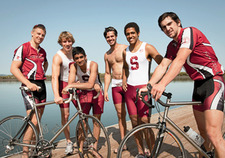 Stanford helped prove another axiom of life last summer, and the individual who gets the credit more than went the extra mile. One moment, Austin Keeley was bicycling smoothly out of the Colorado Rockies. The next, he was out of control, hurtling over the road's guardrail. As he flew, a spike-like piece of metal—a mile marker, Keeley thinks— snagged his jersey and carved a bloody line across his chest.

Keeley and bike partner Dave Evans, both '11, flagged down a car for the 30-minute trip to a hospital in Cañon City, Colo. An inquisitive physician wanted to know quite a bit about who they were, so Keeley explained that they were members of the Stanford rowing team on a cross-country fund-raising ride for the FACE AIDS organization. Obviously intrigued, the doctor picked up a large syringe of pain medication, looked for the right spot to plunge it into Keeley's chest and then announced he was a former Cal athlete. Theorem proved: Ouch, it really is a small world.

A year later, Keeley's tumble is a jokingly ghoulish source of entertainment for the three freshman teammates who will take over the Ride Against AIDS this summer. Already inspired by the physical challenge—almost 4,500 miles in 67 days—they banter about the marketing potential they see in Keeley's scar, thanks to its resemblance to the Nike Swoosh. Underneath those laughs, however, is a much deeper connection. They all share an intense "rowing brothers" camaraderie that defines them as athletes and is driving their effort for FACE AIDS.

Headquartered at Stanford, the organization was started in 2005 by three students—Katie Bollbach, Jonny Dorsey and Lauren Young, all '07—out of concern for shunned and orphaned HIV/AIDS victims in Africa. FACE AIDS mobilizes students across the United States to take part in fund-raising campaigns, with the proceeds going toward healthcare in Rwanda. Executive director Julie Veroff, '07, says $125 pays a year's antiretroviral treatment for one patient.

The crew team's involvement began in 2007, when a former rower, Jeremy Barton, '06, initiated the ride with friend Robby Sumpf, '06. They pioneered a trip that includes scheduled meetings with interested groups but also seizes on happenstance encounters that generate publicity and contributions. That ride raised almost $8,000 for FACE AIDS and resulted in an ongoing partnership with the rowers.

Evans and Keeley raised more than $19,000. Improving on that is up to the cyclists who start pedaling June 14: Shane Hegde, Sanford Roberts and Zane Silver, all '13, women's crew member Claire Fisher, '13, and four students from other universitites. They're hoping alums around the country will help bring attention to their trek.

The Cardinal riders are conspicuously aware of their good fortune at being Stanford students and say they want to do something substantial to help people in distress. They especially want to do it together. "I expect," says Silver, "to end up being in contact with these guys for the rest of my life."

Read a November 2010 update on this story.

What You Don't Know About Campus Maintenance