New Kitchen on the Quad 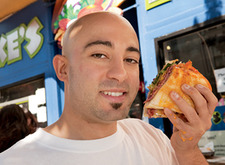 "Dirty sauce" is coming to Stanford. Hardly sounds appetizing, yet it's the name of a sandwich spread that makes mouths water—not to mention causing a neighborhood to tremble and the media to breathe heavily. Come September, you'll know you're at the new Jen-Hsun Huang Engineering Center when you smell garlic.

The aroma will be coming from Ike's Place, a sandwich chain that started as a hole-in-the-wall sensation in San Francisco's Castro district. Owner Ike Shehadeh jumped at the chance to be affiliated with Stanford. Among his gambits is naming sandwiches to reflect the community being served, which is why he's now entertaining suggestions such as The Tree or Beat Cal-ories.

The often elaborate sandwiches, which showcase Shehadeh's playfulness with ingredients, have been celebrated largely for their sauce, which is part garlic and part secret. But the full explanation for their allure includes other savory elements, such as bread that isn't done baking until minutes before it's served. Popular selections include a Lincecum (in honor of the Giants pitcher, Tim): ham, turkey, bacon, avocado and Havarti for $8.98. Then there's the fervid buzz generated by customers. The New York Times reported on Ike's Place by focusing on how the San Francisco location had to reduce its hours because of neighborhood complaints about massive lines of people waiting as long as two hours to order.

A committee including students identified Ike's Place as an ideal fit for the Huang center, one of four buildings that will make up the new Science and Engineering Quad. Occupants will start moving in this summer, and Ike's Place—officially, Ike's Place at the Forbes Family Café West—should be ready to open in September. The spot will remain open till midnight; Shehadeh also will stock the vending machines and offer catering. At press time, he hadn't decided on an opening time but was planning to have breakfast sandwiches.

Shehadeh loves sports, which partially explains his enthusiasm about Stanford. He let slip, for instance, that he already has something in mind with bacon and smoked Gouda to honor former tennis star John McEnroe, '81. But the restaurateur thinks he ultimately belongs at Stanford because of his fixation on quality, guaranteed by close daily involvement with customers.

"Stanford represents the highest standards in the world," says Shehadeh. "That's how I look at the sandwich business, to make sure I'm the very best at it."

In March, Ike Shehadeh visited the Farm to provide a sneak preview and solicit ideas for sandwich names. Suggestions played off everything from the name of legendary engineering dean Frederick Terman to high-tech references. Some samples:

Even the Food is Different

Even the Food is Different