The austere white marble figures one normally sees in the classical wing of museums might not be what their creators intended. At the Metropolitan Museum of Art, for example, a Greek vase from the 4th century B.C. shows an artist applying pigment to a stone sculpture of Herakles. It's long been suspected that at least some ancient statues were originally painted in vibrant colors.

Sophomore Ivy Nguyen wanted to test that theory. A chemical engineering major, Nguyen was inspired by a seminar entitled Art, Chemistry and Madness: The Science of Art Materials, taught last spring by chemical engineering professor Curtis Frank and artist Sara Loesch Frank, his wife. Nguyen entered a juried competition sponsored by the Cantor Arts Center with a proposal to use high-tech methods to look for paint traces on a marble statue, Maenad (4 B.C.-A.D. 25), discovered in a well in what is now the West Bank. Her submission won, and together with Susan Roberts-Manganelli, manager of collections, exhibitions and conservation at Cantor, Nguyen led a team that analyzed the statue and created an exhibition for the museum. 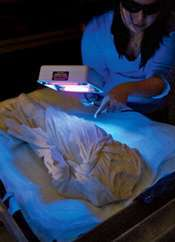 Nguyen used a black light, CSI style, to reveal "ghost images" of pigments and pinpoint areas on the sculpture to test further. Then she used X-ray fluorescence imaging to determine the chemical composition of the residues. From that, she was able to deduce the colors of different parts of the statue, based on minerals known to have been used in paints at that time: chalk to create white; goethite to create yellow ochre; hematite to create red ochre; copper to make "Egyptian" blue; and gold leaf for gilding.

The team made two foam replicas of the bacchanal nymph using 3D rapid prototyping technology. One was painted with the colors found during analysis; the other provides an educated guess as to what the statue originally looked like, with additional layers of paint providing a more nuanced effect. Both painted ladies will be on display through August 7 as part of the True Colors: Rediscovering Pigments on Greco-Roman Marble Sculpture exhibition at the Cantor Arts Center. 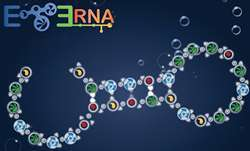 Got 15 minutes to kill? You could play another round of Angry Birds. Or you could contribute to biomedical research.

Working with colleagues at Carnegie Mellon University, Rhiju Das, PhD '05, an assistant professor in the biochemistry department, created an online game called EteRNA (eterna.stanford.edu) that challenges players to design RNA molecules. Das calls RNA, which tells cells how much of which proteins to make and when, "the emerging superstar in the field of biochemistry."

Like DNA, RNA strands are made up of chemical units that partner in a specific way. But whereas in DNA, bases form monogamous pairs (A-T, G-C), RNA bases are swingers: In addition to their preferred mate, they can form less stable bonds with other letters. This property allows RNA to fold up into complex three-dimensional shapes. It also means that changing a single base can dramatically alter the molecule's folded form, which in turn affects its function.

In EteRNA, players "level up" by scoring enough points folding known molecules correctly to gain access to the RNA lab, where they can design their own RNA sequences and vote for the best designs created by other players. The "winning" sequences are synthesized at Stanford and tested to see if they actually fold as intended. Says Das: "If the molecule folds as the players think, they win—and so do we."

A Breakthrough in Cell Control

Bioengineers make RNA devices that one day could detect and attack disease.