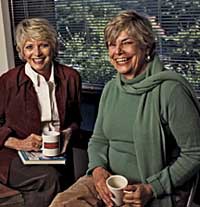 It was the early 1960s. Food was not yet an obsession in America. A hardcover book cost $4. Young women—even those with Stanford degrees—were expected to do one thing: find a husband. And Jinx Morgan (formerly Jinx Adams Kragen) and Judy Perry (nee Pascoe) were fresh off the Farm, possessing recipes that could catch that perfect man.

One day, lying on the beach in Malibu, they decided to write a book for women like themselves—a book filled with sage but light-hearted advice on how to make a decent meal or throw a posh dinner party. Saucepans and the Single Girl was a hit—the pair did a whirlwind publicity tour for their cookbook and Perry appeared on the game show To Tell the Truth. Then, the moment of fame passed, and Morgan and Perry returned to their regular lives.

Nearly 40 years later, enter Leila Porteous. The Warner Books editor (“a darling gal who is all of about 12 years old,” Perry quips) received a tattered copy of the original Saucepans book and saw a chance to ride on the coattails of the Chick Lit phenomenon.

Her idea? Have Morgan and Perry rerelease their book, edited and annotated to provide a window into that bygone world. They added funny footnotes and other bits to show how both food and the world have changed. In the intro, they joke that when they wrote the book, “hooking up was just something you did with a rainbow trout.”

Morgan and Perry are unafraid to poke fun at their former selves. “There’s that pesky cream sauce again,” they write on page 142, referring to an ingredient that frequently graced the bachelorette table. (Two pages later, they wonder, “Did we own stock in some cream sauce company?”) “There were quite a few recipes we had to just jettison,” Perry says. “They were so terrible!”

The two have gone on to become true foodies (think private French cooking lessons). Morgan and her husband, owners of the Sugar Mill Hotel, a small resort in the British Virgin Islands, have published other cookbooks. Perry has worked primarily as a designer, but her current passion is a volunteer gig teaching English to immigrant children near her home in Indian Wells, Calif. “My plate is as full as when I had little kids,” Perry says. “It’s just different servings.”

Back to the World of Ideas

A Reunion for the Record Books

The Erg to Compete

Peter and Dick Dreissigacker, who wanted to row all winter, invented a machine that goes nowhere fast.