Its themes of identity resonate with a heterogenous cast. 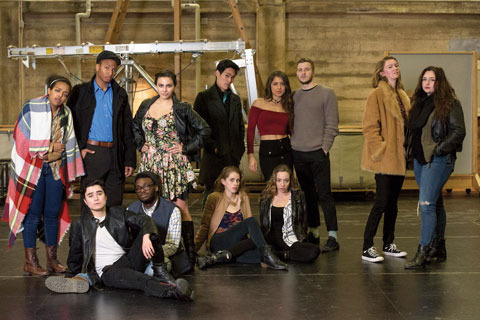 Rent is a musical with as many messages as anyone wants to assign to it—and perhaps an extra one for the Stanford community. As the current project of the Ram’s Head Theatrical Society, the production may seem particularly relevant on a campus where issues involving activism, diversity, sexism and tolerance have been swirling of late, sometimes idealistically, sometimes truculently.

No simple synopsis of Rent does justice to all its nuances, but the crux of the story is inseparable from the diversity and individuality of the main characters—mostly young artists struggling in difficult circumstances in a bohemian New York City neighborhood circa 1990. Ethnicity and sexual orientation are among the elements that shape the context of the relationships and the era. 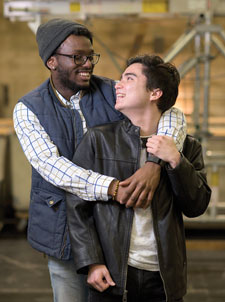 Savage and SackesPreston Lim, ’17, is a Singaporean playing Mark, created as a Jewish-American character but given the biography of an adoptee for this casting. Lim says the range of people written with depth and vitality in Rent pushes a fundamental condition of life at Stanford into the spotlight: “There are so many diverse people on campus,” says Lim. “To some, it may be uncomfortable to accept that it exists.”

After a selection committee pared a large list of spring show possibilities to three final candidates, Rent was an overwhelming winner against Spamalot and Legally Blonde in a vote by the full Ram’s Head membership. It may not be possible to conclude what drove that sentiment, but the choice certainly has enormous resonance with the performers who captured the lead roles during extremely competitive auditions.

Shelby Mynhier, ’17, plays the Hispanic-American Mimi, an exotic dancer who’s HIV positive and a heroin addict. Like her castmates, Mynhier thinks Rent makes the impact it does because it transcends clichés, mostly in the way it conveys the humanity and uniqueness of the characters. “That’s because the musical is so founded in each person’s story rather than clumping together as an oppressed group,” says Mynhier. 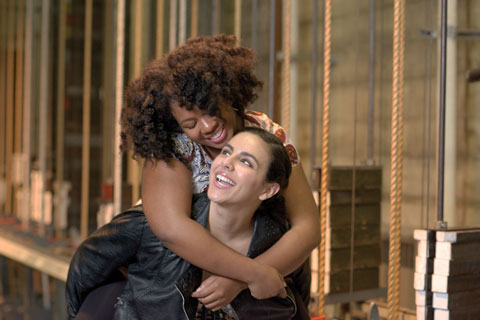 As notable as the show’s social relevance is, this production of Rent also stands out for ambitiousness on the part of the entire Ram’s Head crew. In addition to 22 performers, there are 45 people engaged in off-stage jobs—a sizable number, though not a record for the theater group. But two other factors goose the sense of pressure. As pointed out by director Elizabeth Knarr, ’16, the popularity of Rent raises the stakes for “doing it justice.” On top of that, there’s new technology being incorporated in the production: computerized automation of moving set pieces. That innovation by the student group LITES (Lighting Innovation and Technology Education at Stanford) received $30,000 in combined funding from the office of the provost, the vice provost for student affairs, the Stanford Arts Institute, and the School of Humanities and Sciences.

Merely coincidental or not, say Ram’s Head folks, broad student interest in theater has undergone a growth spurt at the same time that Stanford has raised the profile of the arts conspicuously, in large part through the addition of major facilities such as the Bing Concert Hall and the Anderson Collection. The society, founded in 1911, estimates that fewer than 5 percent of its members are theater majors.

The Show: Rent, a production of the Ram's Head Theatrical Society