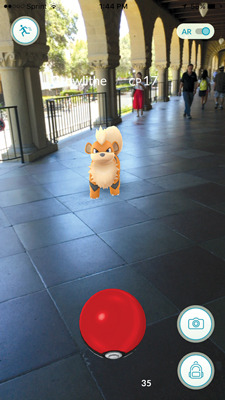 Intrigued by the huge number of people playing the video game on their phones—which requires getting off your keister and walking—Tim Althoff seized the opportunity to study the public health impact from the standpoint of a computer scientist. Althoff, MS ’15, PhD ’19, came to a couple of conclusions: The potential increase in widespread physical activity was significant, and, oh yes, the game rekindled his “Pokémon-crazy middle-school self.”

Among the noteworthy findings by Althoff and two co-researchers at Microsoft was that Pokémon Go raised the activity level even for people who are typically sedentary. Could the smartphone pursuit of imaginary creatures with exotic names— Charizard and Dratini, for example—be the perfect incentive for attaining a healthier weight, better overall fitness and a longer life?

It could, says Althoff, but the italics are his. The research estimated that in a three-month span the game instigated an additional 144 billion steps in collective U.S. activity. We’ll let you decide if it helps to know that equals 143 round-trips to the moon. But all the benefits, all the broad social impact, depend on people continuing to play Pokémon Go or a similar game at a high level for an indefinite and exceptionally long period of time. Your reading break is now over; there’s a Mewtwo a block away.

Inside the Business School's ambitious venture to lift people out of poverty.

Not Your Mom's Gym