How stories about alumni take flight. 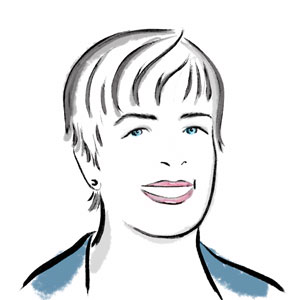 He wasn’t asking the commonplace question “When has technology damaged society?” but, rather, when have we retreated from an innovation that was in commercial use?

And he realized: supersonic flight. The Concorde used to fly from London to New York in 3 1/2 hours. Today’s published flight time on a standard jet: eight hours.

It’s the kind of question that keeps undergraduates talking late at night in the hallway. It’s also the kind of question that spurs magazine stories. Surely there are Stanford alums trying to get us back to supersonic speed, Sam thought. Indeed there are, and it’s all very hush-hush—literally. One of the Concorde’s flaws was that it was too loud to fly overland, but Norris Tie, MBA ’19, and Tim MacDonald, MA ’15, PhD ’20, have a plan to get you across the United States in three hours with more of a thump than a boom. You can read about their quest here.

We don’t generate all our alumni stories through musings and bull sessions, of course. But a fair number we do. Take our feature about young journalists. That grew out of a suggestion that we profile one of the writers who appears in the article. As we talked about it, we realized she was part of a phenomenon: Stanford graduates enjoying early success in a profession that, as recently as 15 years ago, many were shying away from.

Other stories take shape automatically. Digital art director Michele McCammon was enjoying Dear White People on Netflix when she learned that its executive producer, Yvette Lee Bowser, was a member of the Class of ’87. It took about a nanosecond for us to realize the pioneering writer-producer should be the subject of an alumni profile. Same goes for N. Scott Momaday, MA ’60, PhD ’63— I was reviewing a list of prominent alumni authors and discovered we’d never profiled him, although he did publish a piece in the magazine back in 1975, when he was teaching at Stanford. You can read about his life and work before and since here.

We try to keep tabs on as many alumni as we can. But there are 236,449 of us and counting. So when you come across Stanford friends and colleagues who are doing remarkable things, we hope you’ll drop us a line. It’s OK if they aren’t breaking the sound barrier—or any barrier, for that matter. We just want to know who’s making you proud.

Read All About It

What a data deep dive, a Pulitzer and a bouncy ball can teach us about journalism’s rekindling.