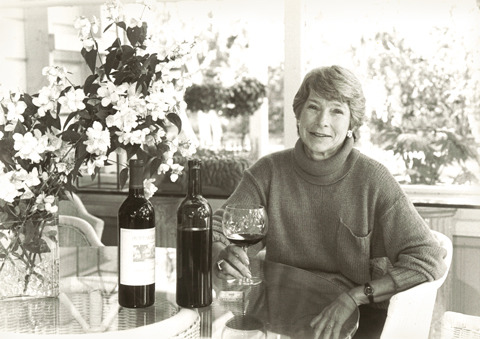 When Mary Weber Novak, her husband, Jack, ’54, and their five children visited California’s Napa Valley in 1970, they happened upon the 31-acre Spottswoode estate in St. Helena. Captivated by its rural beauty and vibrant gardens, they bought the property. They set to work restoring the Victorian house and vineyard and began selling their grapes to local winemakers. Little did they suspect that Mary would become one of the industry’s most influential female owners.

After meeting at Stanford, Mary and Jack married in 1956 and settled in San Diego, where Jack opened a medical practice, selling it once they purchased Spottswoode. George Schoenwald, a hotelier, had established the vineyard in 1882, and the Spotts family took it over in 1910. They survived Prohibition by selling grapes for sacramental wine.

The Novaks stepped into their new roles by taking viticulture classes at UC-Davis and replanting the vineyard. When Jack suffered a fatal heart attack in 1977 at the age of 44, Mary persevered, harvesting and selling grapes to prominent Napa Valley vintners. She hired winemaker Tony Soter, who became one of the wine industry’s superstars, and officially founded Spottswoode Winery in 1982. In 1990, Wine Spectator named Spottswoode’s 1987 Cabernet Sauvignon to its list of the world’s top 10 wines.

At Soter’s urging, Novak began to experiment with organic methods of farming; she was one of the first wine producers to do so. Spottswoode obtained organic certification in 1992, and today the winery relies on solar energy. Mary was joined at the winery by her daughters Beth and Lindy. Beth Novak Milliken, the current president and CEO, said, “I had the honor of working alongside Mom for 29 years, helping her build Spottswoode into the incredible estate and winery it is today. She had immense inner strength, an amazing spirit and love of life, and a dream that Spottswoode would continue through generations.” A champion of women in an industry where few hold top positions, Mary hired a succession of female winemakers after Soter left in 1997.

Mary, Beth and Lindy spearheaded the restoration of Spring Creek, which runs through Napa Valley and had deteriorated due to local real estate development, and, through a partnership with One Percent for the Planet, Spottswoode contributes a portion of its gross profits each year to a number of environmental causes.

In addition to Beth and Lindy, Novak is survived by her children Kelley, Mike and Matt; nine grandchildren; and two siblings.