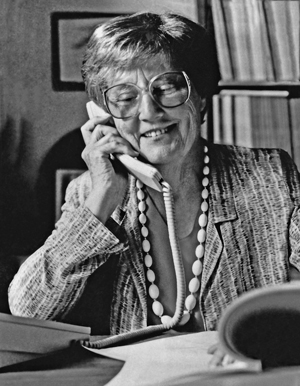 When she died on December 11, Eleanor Emmons Maccoby was the Barbara Kimball Browning Professor of Psychology, Emerita. She lived in Palo Alto and was 101 years old.

The American Psychological Association included Maccoby among the 100 most eminent psychologists of the 20th century—a list that is almost entirely male and includes names such as Sigmund Freud, Carl Jung and Noam Chomsky. At Harvard, she did doctoral work with the man whose name tops the list, B.F. Skinner.

Stanford hired Maccoby and her husband, Nathan, in 1958. He taught communication while she taught child psychology. She raised their three children while serving as the school’s first half-time tenured professor.

“I couldn’t help being somewhat awed,” she recalled during a 2011 interview with the Stanford Historical Society. “Psychology itself was a fairly new field at that time and in some universities still hadn’t split off from philosophy,” but Stanford was already a leader in the field.

Maccoby collaborated with Carol Nagy Jacklin in 1974 to produce The Psychology of Sex Differences, one of 11 books Maccoby wrote or co-authored. The pioneering study shook established views on the innate capabilities of boys and girls. “The upshot of that book and its basic message was that most of what we think about as essential differences in the sexes are myths. They aren’t true,” Maccoby said in an interview with the online project Psychology’s Feminist Voices.

Mark Maccoby remembers when his mother was invited to China in the early 1970s as part of an American delegation on early childhood development. “They wanted her opinion on their schools, and she gave them advice that shocked them,” he says. “Treating genders equally wasn’t anything she was going to sell to the Chinese.”

While many consider Maccoby an early feminist, close friend Myra H. Strober, an emerita professor at Stanford’s Graduate School of Education, says Maccoby rejected the label. “Women of that generation didn’t like to use the word,” Strober recalls.

Maccoby explained in a 2013 interview that she became interested in gender issues because “we lived it.” As a member of Harvard’s faculty in the 1950s, Maccoby, like other women, wasn’t allowed to enter the Faculty Club through the front door.

In the 1970s, women made up less than 5 percent of Stanford’s tenure-track faculty and only 2 percent of its full professors, Strober says. After meeting Maccoby in 1972, Strober teamed with her to create the Center for Research on Women, now known as the Clayman Institute for Gender Research.

“I liked Eleanor from the moment I met her,” Strober says. “She was serious and critical, humorous and supportive, all at the same time.”

Focusing on What Matters