Paper or Air: Which Method Is Greener?

The choice is in your hands.

SAGE (Sound Advice for a Green Earth) is a project by advanced students in Earth Systems and other programs to answer sustainability questions.

Q: Does the amount of paper saved by electric hand dryers offset the increased energy cost and use? What about considerations of hygiene and greenhouse gas emissions?

When drying my hands in a public restroom, I always wonder: Should I trust those stickers that say the hand dryer in front of me is eco-friendly or grab a paper towel? Although we at SAGE washed our hands of this mess a while back, the constant pace of technology warrants an updated answer.

In general, air dryers use fewer resources than paper towels, since towels constantly need to be produced and transported to users, and eventually take up space in the landfill. Even when compared with recycled paper towels that are composted (which are better than those made from virgin materials and sent to the landfill), newer jet air dryers like those by Dyson and XLerator are more eco-friendly. When comparing the environmental impacts of recycled paper towels and older air dryers, it can be a bit of a toss-up, as older dryers require considerable energy and time to completely dry hands. But, of the three options, the newer jet air dryers win hands down, since they can take as little as 12 seconds to dry your hands with 30 percent less energy than the old air dryers, leading to fewer carbon dioxide emissions even when compared with recycled towels.

Since the answer seems so simple, you may wonder why the bathroom paper towel industry exists at all. Some people prefer the speed of paper towels over older air dryers. And, to prevent spreading bacteria, hands must be completely dried after washing. As people don’t always spend the entire 12-30 seconds drying their hands with an air dryer, sensitive locations, like hospitals or commercial food preparation areas, typically recommend using paper towels. However, from a day-to-day hygiene standpoint, when not in a sensitive environment, air dryers get the job done.

To keep those paws clean and dry, here’s a handy rule of thumb: Go for the newer jet air dryer when available. If your only options are an older air dryer or paper towels, using a single paper towel is marginally better than an older dryer. And if you want to really let your tree-hugging self out, all this hand-wringing can be avoided with the age-old tradition of wiping your hands on your pants (or other clean items of clothing). Now that’s a solution that blows away all the other options! 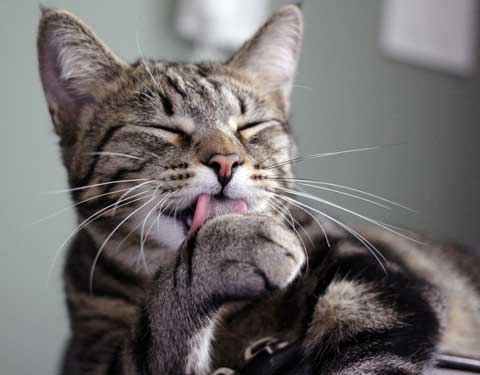 The debate over paper towels vs. air dryers has reached hand-to-hand combat levels, with conflicting studies commissioned by both the paper towel and air dryer industries. There’s a lot at stake: Paper towels command a $2.5 billion industry and Americans use 270 million trees’ worth of them each year. While one study commissioned by the European Tissue Committee (yes, this is real) finds air dryers to be less hygienic than paper towels, the air dryer groups are quick to fight back.

Evaluations of environmental footprints can easily reach a variety of conclusions based on the factors considered. For paper towels and air dryers, most studies consider the materials and energy used in manufacture, transportation to the end user, quantity of paper towels used, energy used by the air dryer and, in some cases, energy required to dispose of the paper towels.

The most thorough analysis of the air dryer/paper towel debate is an MIT study commissioned by Dyson, which finds that the newer air dryers have the lowest impact and the older air dryers the highest (with paper towels not far behind). This study is more credible than many others, as outside parties examined the paper’s assumptions and the researchers incorporated past papers’ findings. The study delves into the nuanced differences between multiple types of towels, standard warm air dryers, the XLerator dryer and two versions of the Dyson Airblade. To try to encompass every environmental metric, the study looks at multiple sources of impacts (as seen in the chart below) and three different scenarios (e.g., whether people actually use the drying systems until their hands are fully dry). With all this in mind, the Dyson and XLerator dryers are found to have the least impact more than 98 percent of the time, since paper towels require energy with every use for their production, transportation and disposal—factors that air dryers do not require on a per-use basis. 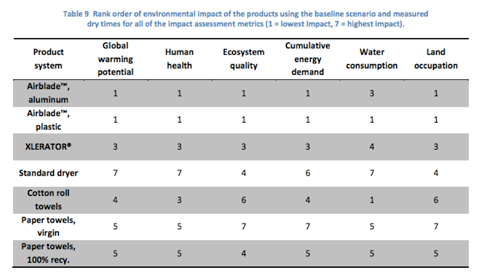 Table: From Montalbo, Gregory, and Kirchain 2011.

From an energy perspective, paper towels tend to be more wasteful than electric dryers, even when excluding the transportation of paper towels to and from restrooms. One analysis found that virgin paper towels use about three times more energy than hot air dryers, or ten times more than XLerator dryers.

Newer dryers like Dyson or Xlerator provide a high-speed air stream that dries hands in only 12 to 15 seconds (about the same as the time it takes to dry your hands with a paper towel), as opposed to conventional dryers, which take 30 to 45 seconds. The XLerator dryer also uses less energy per second compared to older dryers. In comparison, paper towels require much more energy to be produced (either from trees or recycling facilities), packed, shipped to their final destinations and disposed of after use.

In 2015, a study with ties to the European Tissue Commission (and critiqued for its unrealistic test conditions) reignited the paper towel/air dryer hygiene debate, leading to headlines like, “Bad News: The Dyson Airblade is Basically a Virus Catapult.” However, a more reputable source can be found in a Mayo Clinic review comparing the hygiene of paper towels to air dryers. The study concluded that hospitals and similar infection-prone areas should stick to paper towels, which give less-thorough hand washers one last chance to get bacteria off their hands while reducing the risk of user error with air dryers (like leaving the air dryer before hands are completely dry). But, newer air dryers are making strides in hygiene standards. Dyson air dryers were the first allowed for use in food preparation areas, paving the way for a future with fewer paper towels and more resource conservation.

If you care about hygiene, properly washing and fully drying your hands is more important than your drying technique. Some lucky Michigan State University researchers camped out in bathrooms and discovered that a whopping 95 percent of users were washing their hands inadequately.

For both hygiene and the environment’s sake, look out for those newer air dryer models and be sure to fully dry your hands. If that’s not an option, try to use fewer paper towels, or an older warm air dryer as last resort. And, if all else fails, there’s always that clean pair of pants you’re wearing. Whichever route you choose to follow, for everyone’s sake, be sure to properly wash and completely dry those paws!