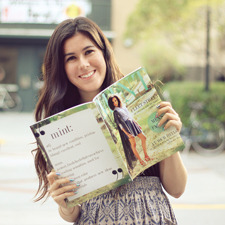 Freshman Ashley Overbeek arrived last fall, toting a fully fleshed-out prototype of a fashion magazine like ones she'd discovered at Brown and Penn. She half expected a shrug from classmates she supposed would be more into computer science than couture. But after posting her idea on the Class of 2017 Facebook page, she was taken aback to receive 200-plus likes, 178 comments and a throng of volunteer offers.

That enthusiasm helped launch Mint in January. The glossy quarterly's focus ranges from runway styles to student-friendly street gear. "I hope this magazine creates a dialogue about fashion and makes people more aware that it is an art form," Overbeek says.

Stanford remains a safe zone for sweats and hoodies, but there are signs of a growing sartorial sensibility. Another group of freshmen planning an online publication, Pulse, counts Vogue among its inspirations. In late January, the Daily added a fashion column to its weekend edition.

Matthew Tiews, executive director of Stanford Arts Programs, says he got an earlier measure of interest four years ago when Cathy Horyn, then the New York Times fashion writer, was arts critic in residence. Her talks and workshops drew crowds of all stripes, he says, but particularly students from the GSB, whose alums have been combining tech and style in such ventures as the online men's clothier Bonobos. This academic year, Horyn led Fashion at Stanford, a series of talks with industry veterans: photographer Annie Leibovitz, designer Alexander Wang and former J.C. Penney chief executive Ron Johnson, '80. 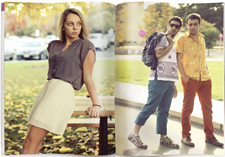 For Sophia Maltesen, a science, technology, and society major, the series was "amazing": She'd assumed a designer like Wang would more likely turn up at New York design schools central to the industry. Maltesen, '15, had long considered a retail career but chose Stanford for its wider opportunities. The rise of tech-oriented fashion firms eases her entry into the industry's broader orbits—she's worked at Forerunner Ventures, a VC company active in the fashion world, and ThredUp, an online consignment shop—though she still plans to go to New York to try her hand at a retail company.

Fashion's rising profile at Stanford mirrors the culture at large, says Elizabeth Kessler, an art history lecturer whose seminar Fashion Shows: From Lady Godiva to Lady Gaga has been a popular choice for two years. The trend is visible everywhere from TV shows to MBA programs to art museums. Kessler points to the Metropolitan Museum of Art's 2011 exhibition on the late British designer Alexander McQueen—one of the Met's 10 most visited exhibits in its 140-year history.