Editor's Note: This story originally appeared in the July/August 2017 issue of STANFORD.

Steve and I met in 1980, during the fall of our senior year. We were introduced by a mutual friend while working at the Stanford Daily, and I think we each had an inkling that it was forever. Especially after our first date. We’d often argue over it, but neither of us really remembered who kissed whom first as we sat on the swing outside the eating clubs at a “hostage party” during the Iran hostage crisis. (Typical Stanford party — fun but in bad taste.)

I didn’t know it when I met him, but Steve was president of his fraternity, Kappa Alpha. I made fun of the “brothers” and their secret words and handshakes. I spent most of my senior year at the Kappa Alpha house, even when Steve wasn’t there. He liked to say that our first date was on a Thursday and I moved in on Saturday. It was during this time that I first witnessed the closeness of these men. It moved beyond the frivolity of everyday life, extending to my friends and me with no strings attached.

After Stanford, Steve and I went on to live in San Francisco with our best friend; one of Steve’s Kappa Alpha brothers, he was the one who had introduced us at the Daily. When Steve moved to Los Angeles to attend law school, I stayed in the City and found safety in rooming with a few of the brothers, who by then had become close friends of mine too. At our wedding, a few years later, the KAs serenaded me with “My Kappa Alpha Rose,” forming a line to hand me a rose and give me a kiss on the cheek. I again laughed at the word “brotherhood” being bandied about.

As our family grew, so did our connections with the fraternity. As they were growing up, our four children often found common ground with other Kappa Alpha kids — after all, their fathers were “brothers.” And some of those brothers have served as godfather to our now-adult kids, Scott (27), Emily (25), Amy (23) and Jenny (20). Without hesitation, and often on short notice, these men have offered them career guidance and shared industry knowledge, as well as assistance with introductions, job interviews and anything else they’ve needed. 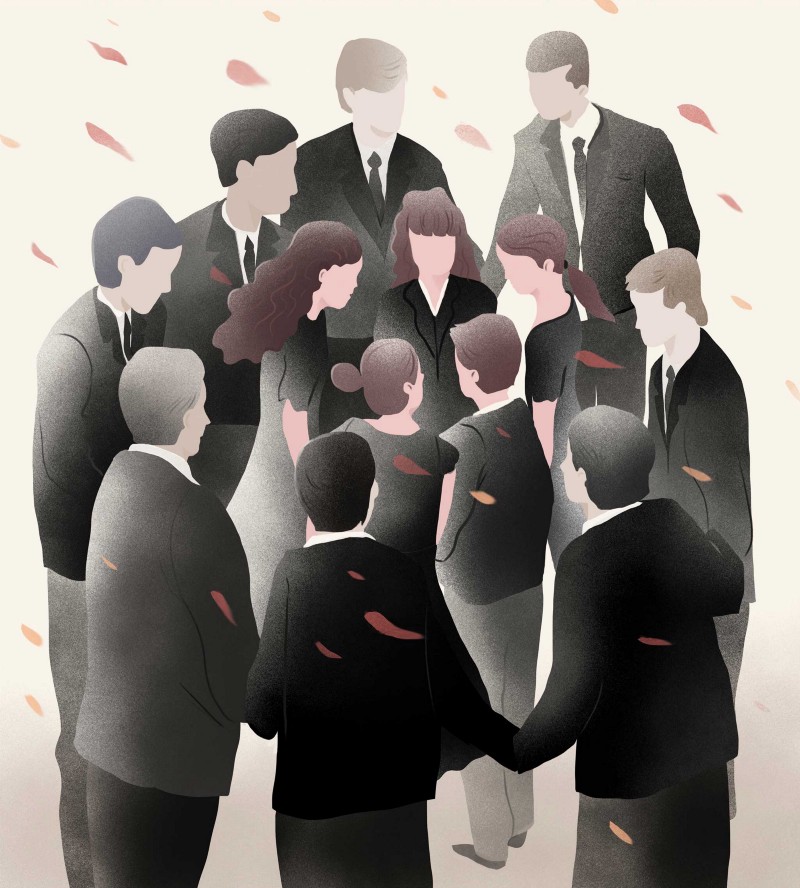 
In February of 2016, in an unforeseen and out-of-character event, Steve took his own life. Everyone who knew him was blindsided. The kids and I struggled to figure out why — to somehow find meaning in his actions. I searched my soul wondering how this person I knew better than anyone else, my best friend and love for 36 years, could do this. I had no clue that he would make this choice, or that he had any reason to do so. Anyone who knew him would say the same — they never would’ve imagined Steve would end his life.

As the news spread, we received an outpouring of love and support from around the world, and while not all the sympathies came from Kappa Alphas, a good number of them did. We were visited by some of the brothers in the first few days. A large group even surrendered spending Father’s Day with their own families so that they could complete a fishing trip that Steve had organized and had planned to take with our son. They could easily have folded on that trip, but they kept their pledge to Steve.

At Steve’s life celebration, two of his Kappa Alpha brothers spoke. As they talked about Steve, it was apparent that these two men, Dave Zaro, ’81, and Jim Hine, ’80, MBA ’84, were his brothers in every sense of the word. They knew Steve and loved him profoundly — the way family members love one another.

There must have been nearly 100 Kappa Alpha brothers in attendance. Many had traveled across the country to be there. Not since my wedding day had I felt so loved and so safe. Those brothers embraced me, my family and our sorrow, and they somehow turned it into joy. Many of us cried, but everyone laughed at some point about one event or another in Steve’s life.

Steve’s Kappa Alpha brothers deserve recognition. And I extend it to other fraternities that offer this closeness to men. Men by nature seem more reticent to surrender their emotions to others, and fraternities allow them a place to do it, even if they don’t recognize that at the time.

Today, as I navigate the rest of my life, I am grateful for the band of Kappa Alpha brothers who knew Steve so well. They continue to check in and lift me up. They remind me of everything that was good about Steve, and they help keep his memory alive for our family.

Terri Mitchell, '81, still lives in Sonoma County, Calif., where she and Steve raised their four children.