From Controversy to Cure

A once-vilified Stanford professor was key to the development of the rubella vaccine. Stanford alum Meredith Wadman tells her story in a new book.

Journalist Meredith Wadman, author of The Vaccine Race: Science, Politics, and the Human Costs of Defeating Disease, tells other people’s stories, not her own. But she does have a personal one and relates it with heart when asked.

After majoring in human biology, Wadman, ’82, went to medical school at the University of British Columbia and earned the equivalent of an MD from Oxford. In a pediatrics rotation at a hospital in Durban, South Africa, in 1986, she learned to treat children suffering, and sometimes dying, from measles that could have been prevented by a 29-cent vaccine. The conditions in general were miserable: She remembers seeing “four newborns crammed into a bassinet meant for one.” She felt compelled to write about the experience and landed the story in Canada’s Globe and Mail newspaper.

“I was totally elated; I couldn’t have been more thrilled,” she recalls. She jettisoned medicine to try freelance writing and then headed for Columbia’s journalism school, receiving a master’s degree in 1992. 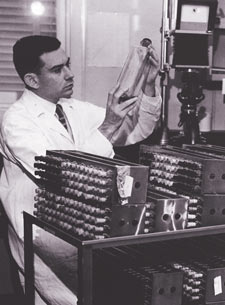 Leonard Hayflick examines normal human fetal cells in the lab at The Wistar Institute, circa 1960. (Photo: University of Pennsylvania)

You could call what followed a blended career. After two and a half years as the Washington, D.C., bureau chief for the Oakland Tribune, Wadman became the bio-medical policy reporter for Nature, covering such issues as human embryonic stem cell research and animal experimentation. In 2013, with the support of the New America Fellows Program, she began three years of full-time work writing The Vaccine Race.

A substantial part of the book tells the complicated story of Leonard Hayflick, a professor of medical microbiology at Stanford School of Medicine from 1968 to 1976 and arguably most famous for his studies of the aging process. Before Stanford, Hayflick developed a cell line that enabled the creation of multiple vaccines, including the one that thwarts rubella (German measles). That history alone is engrossing, as Wadman tells how the vaccine was devised by a Hayflick colleague, Stanley Plotkin, in the mid-’60s during a rubella epidemic that “damaged tens of thousands of American babies.”

The cell line originated with tissue from an aborted fetus in Sweden, and its ownership became a matter of labyrinthine dispute, precipitating Hayflick’s resignation from Stanford. Controversy ignited by antiabortion sentiment was in the backdrop of his work at times.

Vaccine Race wrangles the elements of biography, scientific legalities and social evolution into a saga that Wadman’s reportorial style makes vivid despite the historical distance of many telling moments. When Hayflick lost his appetite for almost everything during an emotionally traumatic period after leaving Stanford, he gravitated to Big Macs and “became a regular at a McDonald’s on El Camino Real.” 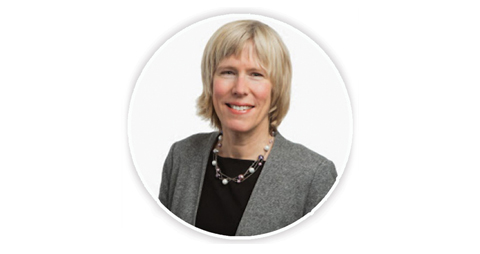 Wadman’s reconstruction of events is the bedrock of the entire narrative. The facility where Plotkin did most of his rubella vaccine testing on children, St. Vincent’s Home for Children in southwest Philadelphia, was closed in 1981. But Wadman went hunting for it twice, recognizing the second time that it is now a school district truancy court. “I had just lived inside that building in my mind,” says Wadman, “and had heard these stories of individual orphans.”

The same resolve motivated Wadman to seek out the woman who in 1962 in Sweden had the legal abortion that was the beginning of a profound chain of events. The woman, protectively identified by Wadman as “Mrs. X,” didn’t want to be interviewed. But at least offering that opportunity to her—to the person who more than 50 years earlier had been the uninformed catalyst for decades of research—was the fundamental journalistic mission.

“I had to try,” says Wadman. “It felt important that she have that choice.”