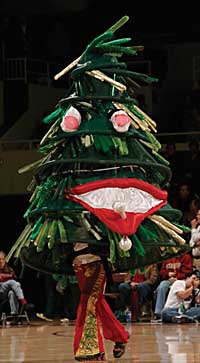 Felled for bad behavior. Drunk in the trunk. When the Stanford Band suspended the Tree mascot this winter for the remaining two weeks of her term, quipsters sprang up in the press like, well, evergreen seedlings.

The defoliation followed the February 9 men’s basketball game at Cal, which the Cardinal lost, 65-62. Co-terminal degree student Erin Lashnits, who had danced rings around the hardwood as this year’s Tree, was axed after a Breathalyzer test showed her blood-alcohol level at 0.157 percent, almost twice the legal limit for driving. Or frolicking in a redwood costume (the Band is on alcohol probation).

Lashnits wasn’t the only tree to get sapped. Senior Tommy Leep, named the new Tree in March, was cut down to size by NCAA officials during the women’s second-round tournament victory over Florida State, 88-70, on March 20. His Cardinal sins? Crossing the midcourt line and dancing in a hallway. Fans responded by chanting, “Bring back the Tree.” The athletic department suspended Leep for the remainder of the NCAAs. Band members tried to fill in the gap by planting saplings on their hats.

What will it take to bridge religious differences?

The welcome mat is always out: just don t send it flying.