Of Movement and Restraint

In dance-in-prison class, Stanford students and at-risk youth learn more about what it takes to break free. 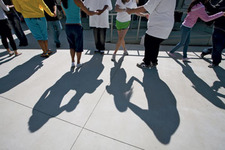 By the third time they've gathered to carpool to class, on a morning in May, Janice Ross's students know the drill.

No one is wearing red or blue, which might inadvertently signal allegiance to the Norteños or Sureños gangs. No one is wearing revealing attire, so as not to inflame adolescent hormones. All are prepared to lock up their backpacks, so as not to tempt anyone at their destination: a high school for juvenile offenders and youth who have been expelled from other schools.

The students at Gateway School, 20 minutes north on I-280 from the Stanford campus, follow their own drill. All submit to searches for weapons. Those wearing electronic monitoring anklets pull their pantlegs down to conceal evidence of their probationer status.

"I always tell my students in the very first class meeting that we're going to be talking about a subject that is hidden, yet all around us," says dance professor Ross. "After this class, I don't think they'll ever again see a story about a new prison going up in California or the lobbying power of the prison guards' union without pausing to think about what they learned."

For eight years now, usually in spring quarter, Ross, MA '75, PhD '98, has taught Dance 197: Dance in Prisons: The Arts, Juvenile Justice, and Rehabilitation in America—a service-learning course that brings Stanford students face to face with America's burgeoning corrections system. The class intersperses lectures by experts on criminal justice and by pioneers in the prison arts movement with dance sessions with juvenile offenders.

Offering such a class takes an extraordinary commitment from a professor—as well as money to cover extra costs. The Haas Center for Public Service has provided grants of $3,000 to $5,000 each year for the class's expenses. Karin Cotterman at the Haas Center says Ross's commitment makes her class noteworthy among the 18 or so courses that Haas supports each year. "Doing service-learning work takes time because it's all built on relationships, and Janice has put time into those relationships."

Ross has been a longtime student of the prison arts movement. Research has shown that inmates who take part in arts programs get in trouble less often than other prisoners. Ross has written about the power of dance as a "humanizing rite" in prisons.

Providing a course that includes one-on-one interaction with incarcerated youth has been a constant challenge. Ross has been force to restructure her course almost every year, usually to satisfy the changing juvenile justice landscape. For instance, early on, she wanted her Stanford students to record detainees' life stories, which required obtaining permission both from a county judge and from Stanford's human-subjects review process. Only then did she learn that authorities wouldn't let her students bring pens or tape recorders into the detention facility.

In its third year the course "really began to take off," she says, when her students got to dance with detained youth in a class led by Ehud Krauss, who has two decades of experience working with local at-risk youth. The Stanford students, usually women, would show up "like a moment of sunshine," Ross recalls. "We'd be in this tiny cramped space with youth who often might not have been out of the locked-down area for months."

Then Ross brought in Christa Gannon, JD '97, first as a guest lecturer and later as co-teacher. Gannon had founded Fresh Lifelines for Youth (FLY) in 1998 in San Jose to provide mentors and leadership training to at-risk youth. "She turned out to be terrific, a very gifted teacher, and just overflowing with all the answers to the questions that my students had been asking about the legal system," Ross says. The service-learning aspect of the course also jelled. "We were going to San Mateo or Santa Clara juvenile hall as many times as we could get in."

This past spring, for its eighth iteration, Ross thought everything was in place. Prison arts activists Rhodessa Jones and Amie Dowling would be guest speakers, and Stanford students would join Krauss's class at Juvenile Hall in San Jose. Then, just as spring quarter was about to begin, Krauss's class was cancelled because of state budget cuts and security concerns.

Dance 197 had "22 students and no place to go," Ross recalls. Gannon put Ross in touch with Gateway School. Ross would stretch course funds to pay Krauss for his time, and the Stanford students would see life at a last-chance high school.

The Stanford students—17 women and two men—arrive at Gateway and greet their partners. The first dance is the jitterbug, danced to "Wake Me Up Before You Go-Go." Then follows a hip-hop routine to "I Like to Move It, Move It." During a country line dance to a song from Seven Brides for Seven Brothers, Krauss urges, "In, out, turn, beautiful, go downstage, turn, go upstage, turn, over, under, elbows and change."

Though Krauss tries to keep the students focused on their steps, the dancing's main function is to facilitate interaction between two different worlds. "For me, what's important for the Gateway kids is this connecting with kids with more education, more focus about their future," he says.

And so it goes through five Thursday mornings. At the final session, both sets of students express regret that the class is ending. "I seen ballroom dancing on TV, on Dancing With the Stars, but I never thought I'd get to do it," said a 17-year-old Gateway student. "It makes you look like a gentleman."

Though the Stanford students are instructed not to pry, many Gateway students have shared their personal challenges—dangerous neighborhoods, abuse, deceased or disabled parents, homelessness. Mariam Nek, '11, said the class caused "a complete 180" in her thinking. "I went from thinking that criminals were criminals, which is what my parents taught me, to thinking that people can change," she said. "Now I tend to look at who they are and where they've come from and what unfortunate life circumstances have put them there. Not that they shouldn't be accountable for their actions, but we can't just punish these kids. They have so much potential."

When the Stanford students met on campus for the last time, Gannon delivered a challenge. "A veil has been lifted, and you may be at a place in your lives where you know too much and you can't just stand around," she said. "As you move forward with your lives, I urge you to think about how you are going to translate this knowledge into meaningful action."

Angelica Zabanal, '09, took Gannon's challenge to heart after completing the course two years ago. She wrote her honors thesis on California's juvenile justice system and decided to become an attorney. "Once I became aware of the social injustices surrounding the American justice system," she said, "it was really hard to turn away."

MARTHA SHIRK is a Palo Alto-based journalist and author who has written extensively about foster care and poverty.