A frosh seminar explores the uses of randomness.

Behold the dreaded, glorious penalty kick in the box. As the goalkeeper nervously adjusts his stance, the striker contemplates: right corner or left?

It’s the ultimate quandary in the world’s most popular sport.

One winter-quarter morning, associate professor of philosophy Thomas Icard, PhD ’14, scrawled a cost-benefit grid of that soccer decision on a blackboard in Building 100. After his 16 first-year students had chewed on it for a while, Icard posited the following: The striker should randomly pick a side. Strategically speaking, there’s no way to outsmart the opponent, and no path for compromise. “What’s good for one [player] is definitely bad for the other,” he explained.

The advice came in a discussion of game theory, but the broader point was to help students understand some of the ways randomness touches decision-making across a range of disciplines, from computer science to economics to quantum mechanics, and how they might better choose when—and how—to employ its advantages. 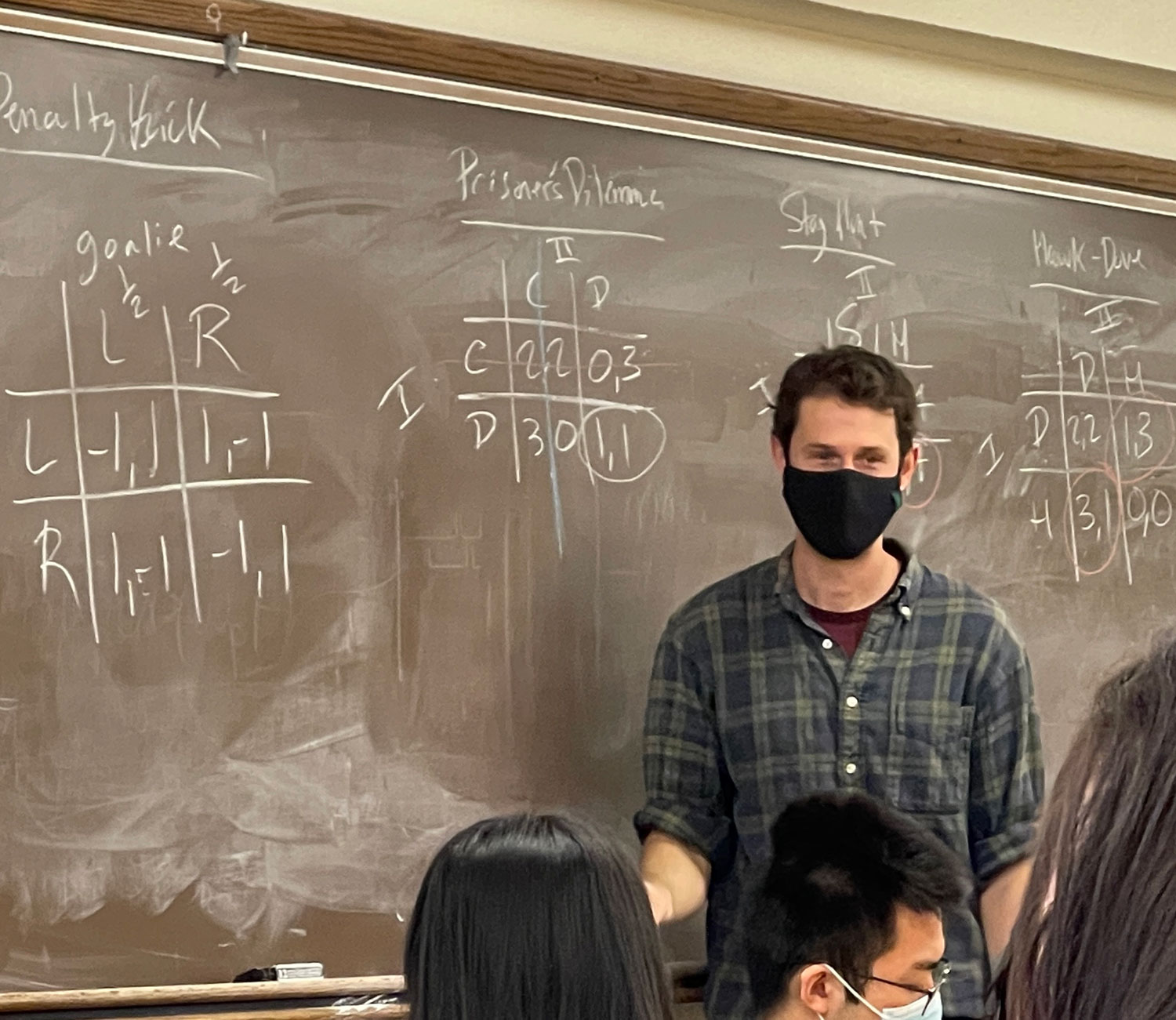 PUTTING POINTS ON THE BOARD: Icard and students work on the penalty kick problem. (Photo: Jill Patton, '03, MA '04)

“For organisms like us, and for any sufficiently complex organism, it’s actually massively helpful to do things randomly,” Icard says. “Sometimes our decisions should be made in a deliberate way, weighing all the options. In other cases, it doesn’t matter what you pick.”

The course, Randomness: Computational and Philosophical Approaches, arose from a chance encounter. A student realized that Icard and assistant professor of computer science and of electrical engineering Mary Wootters were both interested in randomness, and he and fellow students invited the professors to give a talk on the subject. Wootters had the idea to spin it into an introductory seminar, which she and Icard first taught in 2019.

“There are two main benefits of taking the course,” Wootters says. “You get to learn a lot of great material: randomized algorithms, physics, philosophy, biology, economics. The other thing is the fun of approaching a topic from a bunch of different angles. If you think this, then you should randomize; if not, then you shouldn’t.”

When remembering or knowing all is hard
Should you drive a faster route that’s often patrolled by law enforcement or take slower but less-monitored side roads? Mix it up day-to-day to balance the risk-reward calculus.

When there’s a need for speed
Your computer programmer may use it to make those web pages load faster for you.

When you’re not particular
Any toothpaste will do.

To save your energy for big decisions
Select any pair from a drawer full of identical socks.

When you’re not sure exploring will pay off
Flip a coin to determine whether you’ll lunch at a new and unknown (but perhaps better) spot or your old, familiar haunt.

To be fair
Or so says the lottery!

Something is random, Wootters says, if it is generated probabilistically. (Think: What are the odds . . . ?) But there’s no single definition of the term. Instead, Icard says, he and Wootters provide students with a bunch of ways the concept is described and used. To give you a whiff, they start with interpretations of probability, which can itself be defined as relative frequency, or as subjective degree of belief, or as objective chance. Often, they place randomness on a scale—an algorithm, or an object, or an event, can be more or less random. As randomness increases, patterns or rationales become more difficult to detect.

“We ask students, ‘In daily life, when do you treat things as random?’” Wootters says. “One that they often mention is that they like to think of admissions decisions as random so that it doesn’t hurt their feelings when decisions come out.”

One day, the students paired up to play rock-paper-scissors over and over. They recorded and reported their results: 17–29. 25–42. 13–22. Then they discussed their strategies: Was it better to be as random as possible? Or were they able to outsmart their opponent?

Randomness, they decided, was a good strategy—it was harder to anticipate. But that didn’t mean it was easy to lay down their efforts at the foot of fate. “I was trying to predict what the other person was doing,” one student said. “I tried to notice patterns.”

Among the other lessons the course imparts: Economists sometimes use randomness to describe market behavior because it’s too complicated to explain otherwise. In cryptography, randomly generated numbers strengthen encryption—as with digital bank security—because it’s harder for hackers to guess them. In movie animation, an algorithm that assigns random movements to characters in a crowd will enhance a scene’s realism. And, of course, randomized controlled trials, which help establish causality and reliability, are used in all manner of medical research and scientific study. However, Icard says, there are times when one might chuck that “gold standard” or cut a randomized trial short—say, when a new medical device saves every child with persistent pulmonary hypertension, while each child in the control group dies—in order to stave off unnecessary pain and suffering.

“What I hope we’ve convinced you of,” Wootters tells the class, “is that these questions are really complicated.”