No More Business as Usual 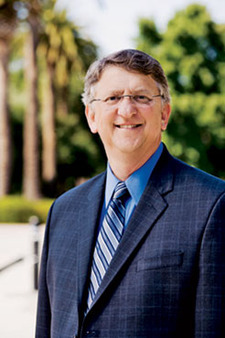 The way the world does business has become a burning daily issue in the current economic environment. The nature of a business education is under scrutiny as well. At Stanford, the individual who is now front-and-center in that hothouse atmosphere is economist Garth Saloner, the new dean of the Graduate School of Business.

Saloner, MA '81, MS '82, PhD '82, was a professor at MIT before joining the Stanford faculty in 1990. One of only two professors to twice win the Business School's Distinguished Teaching Award, Saloner succeeds Robert Joss, who announced his decision to step down as dean last September. Saloner met with STANFORD in June; this is an edited transcript of that interview.

Congratulations on becoming dean. Is it possible to pinpoint what's going to be most exciting or most challenging?

You've been quoted as saying that the GSB needs to train "principled critical analytical thinkers." Is that the issue in business education—fostering leaders with high character?

All the parts of that phrase are important. The high character is important; the principled part of it is very important. But so is the critical analytical thinking part. And what that means is that future managers are not just going to have to be versed in the basics of finance and accounting and so on. They're really going to have to have an ability to think deeply about all of the contextual elements that surround their businesses. To sharpen it just a little bit: I think the financial services professionals who weathered the storm the best in the last few years weren't those who said, "The debt markets are very favorable, how do I make some money off that fact?" Instead, [they] asked themselves, "Why are the debt markets behaving the way they are?" and then dug beneath that and said, "Maybe there's some correlated risks here that should be taken into account" and "Maybe there's some moral hazard in the way that these markets are playing out." And [they] were then able to protect themselves against some of those risks.

So that's what I mean by critical analytical thinking—it's that understanding of the underlying factors. And then the principled part is about understanding how to take that analysis and turn it into action that adds social value.

Do you think the current economic crisis is going to fundamentally change anything about the way corporate America does business?

I definitely do. I think regardless of whether individual managers think that they had some culpability in the events of the last few years, the crisis has held up a mirror to all of them, as it has to business schools. I think both management and management education are going to be tremendously affected.

You were instrumental in the development of the new curriculum that was put in place two years ago. What were the main goals and how is it working out?

One of the things we observed is that the MBA degree is really maturing. And what I mean by that is, we now admit a student body that is extremely diverse, by background and experience.

On the one hand, we have students who are very sophisticated—they've known for a long time that they wanted to get an MBA. They took an undergraduate business degree or economics degree; they spent four or five years on Wall Street or in a consulting firm; and they've come to us essentially pre-MBA. On the other hand, you have a lot of students, some of whom have worked for NGOs in developing countries or have come from Teach for America, [who] have not been exposed to very much in the way of management fundamentals. MBA programs have traditionally taken this breadth of background and experience and put [students] through a one-size-fits-all program, and that was not working for us. We turned our program on its head and start instead by having the students grapple with the broad difficult general management issues that they're going to have to deal with in their management careers. And early on, [we] sort them by background and experience and then have a customized set of courses that match their varying backgrounds and abilities.

What would be an example of a broad management challenge?

We have in our first quarter a course called critical analytical thinking. It's a 15-person seminar led by, typically, a full professor. For example, in that course in the last couple of years, we've started with the question, "What should Google do in China?" The issue there is, Google has a choice between locating their servers in the country, in which case they're subject to some government oversight as to the content but the service is good, or they can locate them outside the country and have degraded service but not be subject to any governmental oversight. Now, remember that Google's corporate mantra is "Do no evil" [sic], and we force the students to take a position one way or the other.

Is anything about why students are seeking MBAs different than, say, five or 10 years ago?

I would identify two trends that I think are notable. The first is that students aren't coming looking for a traditional management certification. They're really—at least the students that we're lucky enough to attract, and we pretty much get our pick of the best students out there—using the two years to think about how to launch themselves on a career of impact and meaning. They're much more thoughtful than students in prior generations about what they really want to do with not just their careers, but their lives.

The other important difference is we see many more students whose goals are not just personal and individual goals, but societal goals. The desire to really use their education for change and for larger societal benefit is very much on the upswing.

What will the new Knight Management Center campus mean to the kind of education GSB offers?

The new campus is being designed with the new curriculum in mind. The old curriculum was one-size-fits-all and was very much about standardized classes in 66-person, three-tiered classrooms. The new curriculum is much more about customization and flexibility. We'll have more lab-type settings where students are doing hands-on skill development. We'll have many more accessible seminar rooms as well as kind of three-tiered classrooms. We're going to have a 600-person auditorium for large events or large lectures. We will have some flat space where you'll put tables and students will gather around the tables doing projects.

In addition, the campus is right across the road from our student living facility, the Schwab Residential Center. Our hope and our vision for the new campus is that it will really be a live learning place that's not just alive during class hours, but is alive around the clock—a place where the students will come over from the dorms, grab a latte in the evening and sit with their study group out in this wonderful weather we have and have their laptops open with a wireless connection, collaborating and doing work.

And we're increasingly reaching out in our classes to other parts of the University. We have a growing number of classes that are set up to be collaborative, where we have team projects that involve students from the Business School and the Medical School and Engineering and the ed school and so on. Our hope is the new campus will draw all of those students in and really be a hub for activity.