Stanford's investments generated a 14.4 percent return for the 12 months ended June 30, and the University's endowment was valued at approximately $13.8 billion as of August 31, the last day of the fiscal year.

Media coverage of the results—which confirmed a sharp turnaround from the recession-driven decline of 25.9 percent that occurred in 2008-09—noted the lesser returns at the two wealthiest U.S. universities, Harvard and Yale. Harvard, with an endowment of $27.4 billion, reported an 11 percent return; Yale, at $16.7 billion, an 8.9 percent return.

Stanford's gains came from its merged pool of investments, which includes most of the University's endowment and expendable funds, as well as capital reserves from its hospital and clinics and Lucile Packard Children's Hospital. The endowment's value rose 9.6 percent over the previous year; it is calculated from investment results plus gifts and other funds transferred into the endowment, offset by the annual payout made for University operations. The budgeted payout for fiscal 2011 is $758 million.

"Our investment managers took advantage of strong equity and credit markets through the first three quarters of the fiscal year," John Powers, chief executive of Stanford Management Company, said in a statement. "Efforts to diversify and mitigate risk" were helpful during a "challenging June quarter." 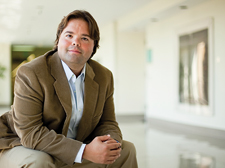 Carlos D. Bustamante, professor of genetics at the School of Medicine, has been named one of 23 MacArthur Fellows, who receive $500,000 no-strings-attached awards that are widely known as "genius grants." The fellowships, from the John D. and Catherine T. MacArthur Foundation of Chicago, are free of any reporting requirements or conditions, offering winners unusual independence to "reflect, create and explore."

Bustamante's research examines the evolution of population genetics in humans, dogs, plants and pathogens. Reacting to the grant, he noted: "Often our work is on the fringe of what people think is doable, or even reasonable. To me, this award validates the crazy disparateness of the projects in the lab. One minute we're talking about dogs, then next about humans, and then about Streptococcus." 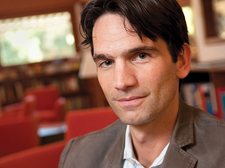 Burgeoning arts efforts at Stanford will be coordinated under a new post filled by Matthew Tiews, who has been appointed executive director of arts programs for the School of Humanities and Sciences. Tiews, associate director at the Humanities Center since 2005, steps into a role created after the retirement of Kären Nagy, assistant vice president for the arts.

Tiews's responsibilities include coordinating activities of the Stanford Institute for Creativity and the Arts, Stanford Lively Arts, the Cantor Arts Center and the Bing Concert Hall now under construction. The hall is among the initiatives signaling a greater attention to the arts on campus, whose "front door" will eventually feature Bing, Cantor, Frost Amphitheater, Memorial Auditorium and the planned Deedee and Burt McMurty Building for Art and Art History.

The 2010 Stanford University Safety, Security and Fire Report offers statistics for the last three calendar years on a dozen types of crime, information on campus fires from 2007 to 2009 and, for the first time, data on domestic violence and stalking.

Most of the report focuses on safety and security guidelines; the portion on crime covers categories including car and building burglaries, bike thefts, rapes, and violations of alcohol, drugs and weapons laws. The new tracking of domestic violence was undertaken at the behest of members of the Stanford community. Seven incidents were reported in 2009, although, along with sexual assaults, such crimes tend to be underreported.