New Kids On The Blockbuster 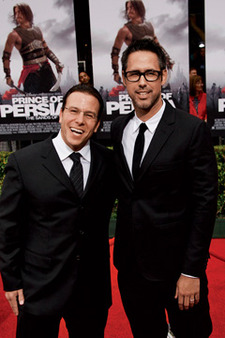 Aside from being produced by Jerry Bruckheimer, two of the summer's biggest big-screen spectacles, Prince of Persia: The Sands of Time starring Jake Gyllenhaal and The Sorcerer's Apprentice starring Nicholas Cage, have this in common: screenplays co-written by Doug Miro, '94, and longtime collaborator Carlo Bernard.

After receiving an MFA from the USC School of Cinematic Arts, Miro worked as a production assistant in Los Angeles while he and Bernard wrote scripts at night and on weekends. The pair's production credits include the screenplays for psychological thriller The Uninvited and WWII drama The Great Raid.

But it was an unproduced adaptation of a novel by Dean King called Skeletons on the Zahara: A True Story of Survival that got Bruckheimer's attention. The grand pooh-bah of the popcorn flick brought them in for rewrites on Prince of Persia, which is based on a popular video game series. "The first thing they said to us was 'make it as big as you can,'" Miro said in a interview. "And for us it was like, are you kidding? Jerry Bruckheimer is asking us to make it as big as we can?"

Now the duo is as hot as Morocco in August (where, incidentally, they spent time on location during the filming of Prince of Persia). The second half of their summer double feature, Sorcerer's Apprentice, takes place in a modern-day Manhattan where mystical forces of good and evil battle for control of the city. And they are at work on the third installment of Bruckheimer's National Treasure franchise.