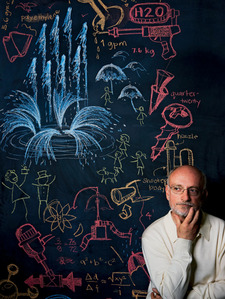 If you've ever been mesmerized by a fountain in a shopping center, airport or other public space—felt a smile turn up the corners of your mouth as you watched seemingly animate streams of water leap and dance, scratched your head as you wondered 'how'd it do that?'—chances are you have Mark Fuller to thank.

During the past two decades, Fuller, MS '78, has created some of the most awe-inspiring water installations in the world. His portfolio includes the famed Fountains of Bellagio at the Las Vegas hotel and casino, which Steven Spielberg once called "the greatest single piece of public entertainment on Earth."

"Mark's made water an attraction in a way that no one else has before," says Martin Sklar, who was Disney's chief Imagineer for 30 years and who gave Fuller his first job out of grad school at Stanford. Historically, Sklar points out, water was a mere embellishment to statuary. Fuller has made it the star.

With his collaborators at WET (Water Entertainment Technology), the company he co-founded in 1983, Fuller has created hundreds of water features around the globe. Each is unique. Whether simulating the rushing and sucking of sea surf, wafting non-cresting waves along a narrow channel or trapping miniature cyclones inside Plexiglas columns, they invite passersby to experience one of the planet's most abundant elements in new and unexpected ways.

Water is more than Fuller's medium; it's his muse. "There's a fluidity and movement and spirit to water," he observes. And there's something else, too: dramatic tension. "Any good story has to have a protagonist and an antagonist or it's boring." Water is both. "We love water. Also, it's scary. In the back of our minds we know it could turn on us. It's the classic story twist: the love of my life could kill me."

This yin-yang balance plays out on a grand scale in WET's largest installation to date, the Dubai Fountain at the Burj Khalifa, which opened in 2009. Beneath the placid surface of a 32-acre man-made lake, 1,500 nozzles wait stealthily. When they burst forth in time to Arabic and Western musical accompaniment, some use powerful blasts of pressurized air to propel water 50 stories high.

Most WET attractions combine "Shooters," which create the towering vertical plumes, with another type of nozzle, the "Oarsman," which can move the stream 180 degrees in any direction. The Oarsmen create fanciful fans of water that wave back and forth or spin in tight circles, sculpting sensual shapes that call to mind ballet dancers or fawning geishas. Between the feminine strokes of the Oarsmen, the Shooters add a masculine punctuation as they propel spouts of water skyward.

Back in 1995, when Steve Wynn approached WET about building a fountain for his latest resort development, the Las Vegas real estate mogul told Fuller, "This must be the best, the biggest thing you will ever do." Three years later, when the completed Bellagio attraction jumped and boogied to tunes such as "Singin' in the Rain" for the first time—with all the finesse of Gene Kelly himself—Fuller remembers watching onlookers gasp, laugh and then produce waterworks of their own as tears streamed down their faces.

"That is what turns me on," he says. "I like making people feel more glad to be alive. If you had a bad day at the office, you stand there at the fountain and forget about it. It's just a moment when everything else swirls away."

For Fuller, a key eureka moment came while he was an undergraduate studying civil engineering at the University of Utah. One of his professors introduced him to the principle of fluid dynamics known as laminar flow. Water often runs haphazardly out of household faucets because molecules bounce around in different directions. But in laminar flow, those molecules are channeled in one direction under equal, steady pressure, producing a stream that—from a distance—can appear stationary, a glimmering line of silver suspended in air. (Fuller later discovered he could color that line by beaming light through it, an insight applied to dazzling effect at Las Vegas's new CityCenter Complex, where WET has created the first-ever fountain of light that can be enjoyed even under a bright noon sun.)

For his senior honors thesis, Fuller constructed a laminar-flow fountain using a garden hose, a large plastic cylinder and several dozen drinking straws. It won an award from the American Institute of Architects and became the world's first permanent laminar fountain when it was installed in a Salt Lake City office building owned by the father of a friend.

While studying mechanical engineering and design on the Farm, Fuller continued to develop and refine methods for controlling the flow of water. He demonstrated one early fountain in the backyard of art professor Matt Kahn's home. Kahn, now emeritus, has taught in both the art and engineering departments at Stanford for more than 60 years. He says that no other graduate in the history of the school has used water in the manner Fuller has to create art. "It's about sky and water. It's about yesterday and tomorrow."

Fuller credits Kahn, whom he considers his mentor, with teaching him how to seamlessly integrate technology with aesthetic design—and how to bring a theatrical flair to all he does. After Stanford, he spent five years applying those lessons as an Imagineer at Disney. He built several fountains, among them a series of leaping laminar streams created for the opening of Epcot Center in 1982.

Then in 1983 Fuller left that "dream job" to strike out on his own. He co-founded WET with two other ex-Imagineers and named himself CEO—for "chief excellence officer." Kahn's daughter, Claire, '77, was among the company's first employees. She accompanied Fuller to his 1995 meeting with Wynn and helped design the Bellagio installation from the ground up. After 25 years with the company, she still finds it astonishing that she began a career in graphic design and became, among other things, a water choreographer.

Early on, Fuller realized that to do all that he envisioned, he would have to get into the business of inventing. He holds more than 50 patents for water control, air compression and specialty lighting.

WET's recently revamped research and development lab—dubbed the Idea Playground—is housed in 30,000 immaculate square feet of industrial space located across the street from the west runway of Burbank's Bob Hope Airport. This poses some interesting challenges. The vertical power of WET's nozzles is such that "we call the FAA before we test them," Fuller says with an impish grin. As it happens, his jets travel at speeds faster than his neighbor's. The startling crack or boom that accompanies the water burst from the larger Shooters comes from breaking the sound barrier (see infographic).

Initially, WET outsourced its manufacturing to China or India. But Fuller found he couldn't adequately control quality from afar. Two years ago he pulled nearly all production in-house. He claims that rigorous attention to detail actually saves money. Some say WET's manufacturing operation rivals that of the nearby Jet Propulsion Laboratory in Pasadena, which builds robotic spacecraft for NASA. And indeed, during lulls, WET takes on outsourced work from the aerospace industry.

The components for WET's fountains and installations are fabricated on large Italian- and German-made machines that can cost up to $1 million each. In a matter of minutes they can take a flat circle of stainless steel and mold it like wet clay to create a specialized cone for an underwater light bulb or a missile-shaped casing for a Shooter.

Fuller leads a tour of the facility like Willy Wonka showing off his chocolate factory. "That's just a beam of light cutting through steel faster than you or I could snip paper," he says, pointing to a machine sending a thin red line over a metal plate. "You wouldn't want to have your hand in there. You wouldn't feel a thing when it was severed. It's fun to watch. It moves like butter."

In a dark room for developing optics technologies, he flips a switch and, in a blink, opaque "e-glass" walls become transparent, flooding the space with afternoon sunlight. In Fuller's world, just about everything is custom. He even hired set designers from the television show CSI to outfit a gleaming white, state-of-the-art laboratory for water chemistry experiments.

Among other tasks, WET scientists will use the laboratory to test new methods for cleaning dirty water, one of Fuller's many strategies for encouraging environmentally conscious fountain construction. "What if we use water that is polluted, then we clean it and make it sparkle and use it so your kids can play in it," Fuller asks. "Do you think anyone will say no?"

WET headquarters also boasts Los Angeles County's first permeable grass parking lot. The water used to test nozzles splashes down onto gravel and is recaptured underground to be reused or percolated back into the local water table. What's more, fresh green grass doesn't stop at the glass exterior wall of the lobby, but continues inside, playfully blurring boundaries in the same way that some WET attractions erase the line between fountain and onlooker. (At the Dorothy Chandler Pavilion in downtown Los Angeles, for instance, water shoots directly up from the courtyard. Well-dressed opera patrons beware!)

Elsewhere, cozy pod-like rooms are filled with beanbags for maximum comfort while brainstorming, and white boards cover walls in hallways and gathering spaces to capture ideas before they evaporate. In this innovative space—and at WET satellite offices around the world—Fuller and a small army of designers, architects, engineers and scientists seek heretofore unimaginable ways of harnessing the elements.

"[At Disney Imagineering] we used to say you don't rest on your laurels," says Sklar. "Whatever you did yesterday will never be good enough again because people will expect more."

Fuller has taken this ethos to heart: "We've just scratched the surface of what we can do."

Tennis Back on Top