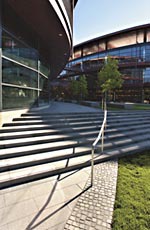 From his ground-floor office in the neuroscience cluster, Krishna Shenoy can look across a grassy lawn into the robotics lab. And anyone strolling through the courtyard—a surgeon in blue scrubs, perhaps, en route to a neighboring office—can stop and peer through the glass wall at Shenoy’s latest experiments with prosthetic devices. It’s like working in a fishbowl, in the best sense.

“We’re always asking, ‘How do you help students and other faculty know about work going on at the University?’” the assistant professor of electrical engineering says. “In the end, it’s by word of mouth: ‘Hey, you should go talk to . . .’ And I think the Clark Center will serve that function.”

Shenoy is one of about 40 junior and senior faculty from three schools—Humanities and Sciences, Engineering, and Medicine—who are taking up residence in the $146.6 million James H. Clark Center that opened on October 24. With their lab groups and with hundreds of affiliated faculty and researchers in other campus buildings, they compose the Stanford experiment known as Bio-X.

Some compare the promise of Bio-X to the collaborative spirit that fueled wartime discoveries at Los Alamos, N.M., where scientists worked, ate and lived together. Whatever their specialty, the chemists, physicists, clinicians and computer scientists of Bio-X all have a passionate curiosity about how biology interacts with “X,” the variable that can stand for engineering, computation, medicine and more.

Shenoy, for example, is an engineer who works with complex systems that process information, like computers and mobile satellite communication systems. But he also is fascinated by what he calls the “ultimate computation”—the human brain. “How does it do what our most sophisticated computer systems still can’t do?” he wants to know. “How can it coordinate elaborate movements, like golf swings or violin playing?”

Those kinds of questions swept Shenoy into six years of postdoctoral study in neurobiology, with the goal of learning how to take electronic measurements of the brain as it controls body movements. In the Neural Prosthetic Systems Laboratory he now heads, Shenoy is eavesdropping on the brain’s signals—“neurons chattering away” —and trying to decipher and then translate the detailed electrical impulses into mathematical algorithms that someday will enable a computer chip to guide a prosthetic arm. He suggests that those and other breakthroughs will come about as, say, engineers collaborate with, say, neurosurgeons in the Clark Center cafeteria or over a cup of Peet’s coffee, available on the third floor.

“The idea is for this to be a community center for interdisciplinary biological science,” says Matt Scott, Bio-X’s chair and a professor of developmental biology and of genetics. “As people run into each other in the courtyard and on the balconies, they’re getting to know each other and using the space for the larger community, and not just for the people who happen to live here.”

By day, the Clark Center conjures up a starship docking station, all gleaming curves and glistening glass, with metal stairways that wind up the exterior like exotic extraterrestrial vines. At night, when the lights go on in the labs and bubble up from the skylights of the underground auditorium, the limestone facade glows.

Inside the three wings that house researchers from dozens of departments, the pursuit of possibilities is palpable. Chemists cross invisible lines from their “wet” labs, outfitted with fume hoods and safety stations, into the “dry,” intricately wired spaces assigned to biocomputational teams. Researchers from the biodesign cluster who go for a stroll can quickly find themselves standing in front of a computer table littered with brightly colored blocks and guarded by multitasking robots. Branching off from the labs are “brainstorming” rooms with whiteboards on wheels, and scattered throughout the see-through honeycomb are bright yellow “hotel benches” where visitors can check in and out with short-term projects.

Scott is determined to spread the gospel of Bio-X by inviting campuswide audiences to regular “TIE,” Talks in English. Shenoy says undergraduates already are on board, with increasing numbers of electrical engineering majors seeking to apply their skills to the life sciences and medical therapies. This year, he plans to introduce “a more neuroengineering flavor” to his courses on transistors and circuit design. “A great way to get students excited is to slip in biomedical applications.”