It wasn’t long ago that 3D printing seemed like cutting-edge technology. But to hear Grace Hu say it, our 4D upgrade is already here—printing objects programmed to expand, contract or pulse in the fourth dimension: time.

4D printing’s potential, she says, is vast, from artificial organs to self-assembling shelters on Mars. “You imagine that you can 3D print a heart, but you also have to get it to beat synchronously, to connect to veins and other things.”

After squeezing a bachelor’s in materials science and a master’s in computer science into four years, Hu, ’21, MS ’21, starts a joint doctoral bioengineering program at UC Berkeley and UCSF this fall. There she hopes to marry her expertise in material structures and her programming prowess with 4D printing’s emerging powers.

Hu has long applied science for good. In high school on Long Island, she unleashed a blizzard of “cold emails” to land a role in a nanotechnology lab, where she pursued research inspired by her grandfather’s battle with Alzheimer’s. As a college sophomore at Stanford’s overseas study program in South Africa, she taught coding to kids in Cape Town and led kids’ workshops on using the $1 Foldscope, a paper microscope developed by bioengineering professor Manu Prakash’s lab, where she had been a research assistant. During the pandemic, she taught people to program through a Stanford-hosted, volunteer-led initiative, Code in Place, which reached 10,000 learners globally.

Helping others has in turn helped her. Hu says she doesn’t excel in traditional measures of learning, like tests. “I struggled even in high school to learn things. My memory is terrible,” she says. Instead, she thrives on projects.

“Teaching forces me to learn more and become a master in that field because students will come at you with every sort of question.” 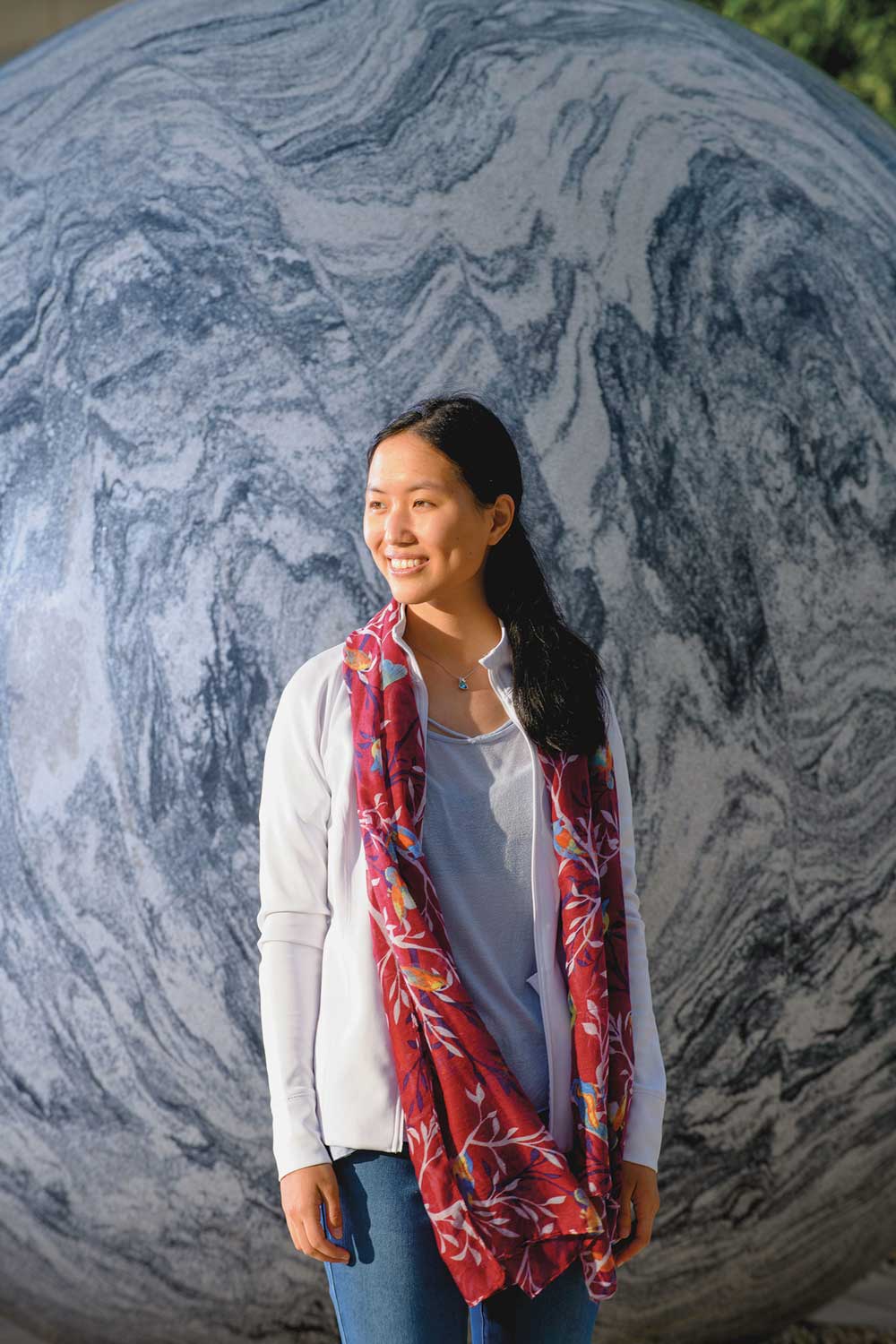 POWER TOOLS: Hu says that when she teaches others to code or to use scientific instruments, she’s enabling them to contribute to the act of discovery.

“My grandfather would not remember how to tell time or what streets were what. I didn’t really know what was happening, so I took it upon myself to read and learn more. When I heard about nanotechnology, that it can be used to help people with brain disorders or other neurodegenerative diseases, I thought, ‘That’s something really cool, and I would love to specialize my initial research work on Alzheimer’s or Parkinson’s.’

“Doing research at a younger age taught me a lot of skills—being resourceful, learning how to culture cells or to do public speaking and be able to pitch an idea to someone.

“Scientific communication and writing takes you so far. A lot of people might not understand the hard-core, in-depth science, but if you communicate ideas and inspire people, they’ll see what you see.

“One of the things I learned from the Prakash lab is to think about what you want to prioritize and what people around the world need most.

“Code in Place really gave people hope. A lot of people lost their jobs or couldn’t go back to work, and they wanted to learn how to code so they could do things remotely and contribute to social organizations or volunteer projects. I love hearing from people who email us saying learning how to code inspired them as a young girl in Thailand or as someone in Egypt.

“One thing I really appreciated [about the kids I taught in South Africa] was seeing how hard people would work if they’re given the resources. That’s something I really like getting involved with—enabling people from different backgrounds to learn how to code so that they can elevate themselves in society and contribute to the development of technology and the development of the sciences.”

How a boy who played with fire (and mercury, and bleach) became a bioengineer who brought $1 origami microscopes (and paper centrifuges, and snorkel-mask PPE) to the world.