Me Talk Pretty One Dia

When I scorned the foreign-language requirement, I didn d come to love. 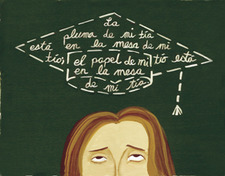 Now that dear, old Madame Linford has returned to Paris and is safely out of earshot, I feel no fear admitting that I hated French in high school. In my three years of language courses, there were a few shining moments, like reading The Little Prince or the annual end-of-the-year party, during which we would eat éclairs and watch a subtitled movie. But I found verb conjugations and oral exams to be an exquisite form of agony. From the moment I set foot on the Stanford campus, I had no intention of slogging through a language course again.

Despite a pleasant trip to Paris and some mildly troublesome degree requirements, I remained faithfully anti-French for four years. Thanks to my obstinacy, I joined my classmates in cap and gown in June of 1998, filed into Memorial Church, and was handed an empty envelope instead of a diploma. I had enough units. I had filled the distribution requirements. I had completed all the major requirements for my degree in English, except one: a fourth-quarter language class.

I was definitely not the first person at Stanford to “walk” in the graduation ceremony without receiving a diploma, but I felt a bit like a fraud. Graduation day is as much about the ritual as it is about receiving a diploma. It is a rite of passage, the end of an era. However, most “fake graduates” have a solid plan to complete their coursework or thesis within a quarter or two. My plan was a little more nebulous. Frankly, it didn’t exist.

Many of my classmates hung onto college a little longer than I did. They co-termed, rented apartments in Palo Alto, went to basketball games at Maples. I should have followed suit until the diploma was in my hand, but instead I moved to San Francisco and got a job. It was the late ’90s, and the Internet industry was booming. I was swept up in a blissful wave of late nights and company picnics, happily job-hopping and saving money for tropical vacations. I never lied to my employers about my degree. (In fact, no one ever asked me.) I almost forgot I didn’t have one.

Meanwhile, years were passing. My saintly parents, who had been surprisingly supportive—or at least tolerant—began to panic. My best friend, a laid-back Stanford English major with a legitimate diploma on her wall, admitted that my lack of a degree was causing her stress. It was starting to worry me, too. I had let my stubbornness go on for too long. My French lessons were fading to distant memory and I certainly wasn’t going to sit through a year of French in Action programs on PBS.

It was with this anxiety, the burst of the Internet bubble, and a sense of adventure that my best friend and I planned an extended trip to Mexico. We wanted to travel, read, climb ruins and spend some days at the beach. I also reluctantly planned to take Spanish courses, in hopes of returning home with some progress made toward the nagging deficiency in my educational requirements.

In late autumn of 2000, our plane touched down on the tarmac in Mexico. It was love at first sight. Within a week, I was desperate to speak Spanish. I diligently performed my nightly language homework, conjugating verbs with vigor and carefully studying the difference between the past and the imperfect tenses. I picked up vocabulary from restaurant menus and casual conversations, and slowly learned to communicate in a fresh and interesting way. I grew to love the limitations and possibilities of speaking in a foreign tongue. As I suspect my Stanford professors could have predicted, I also developed a deeper perspective on the English language.

Soon enough, I aced the language proficiency test from my home in Mexico City and waited gratefully as the friendly administrators in the English department carried my paperwork to the registrar. Today, my parents happily babysit my framed diploma. Sometimes, as I walk home past taco stands and soccer games, I think to myself: ¿Dónde demonios estoy viviendo? How did my life come to this?

Well, I owe it all to Stanford, though I never took a language course there.

JULIE DOHERTY, ’98, is an artist who lives in San Miguel de Allende, Mexico.

More than ever at the School of Education, research is grounded in reality.