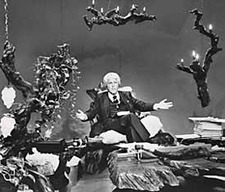 Recruited by the Faith Center Church in the early ’70s, preacher Gene Scott asked for complete control, got it, then kicked out the existing church leaders, including Jim Bakker. He found himself with a church, four broadcast stations and a $3.5 million debt.

Scott took to television broadcasting like a wise man to Bethlehem. Over the next four decades, millions tuned in to a radio and television ministry that broadcast around the clock and around the globe. The Los Angeles area congregation grew from 500 to 15,000 and in 1986 moved to the historic United Artists theater, which Scott renamed the Los Angeles University Cathedral. Its beacon: a red, neon “Jesus Saves” sign. Its address: P.O. Box 1.

William Eugene Scott died February 21 of a stroke. He had been fighting prostate cancer. He was 75.

Growing up in Gridley, Calif., the teenage Gene Scott chafed against the strictures of his father’s Pentecostal congregation, which chided him for wearing shorts to play basketball. He graduated from Chico State in 1952 with a degree in history and stayed on for a master’s in social science.

In 1953, he enrolled in Stanford’s School of Education, where he wrote a proof of the Resurrection for Professor Alexander “Lex” Miller, an agnostic. Scott “was extremely proud of being a Stanford alum,” says Mark Travis, the preacher’s chief of staff for 20 years. Attributing his work ethic to Stanford training, Scott liked to tell audiences that he retyped his 394-page doctoral dissertation on Reinhold Niebuhr after finding one typo.

Scott became famous for a TV ministry that mixed exhaustive examination of Bible passages with relentless demands for donations. His broadcasts showcased his passion for horses, cigars, comely women and profanity. To ensure that telecasts weren’t disrupted, attendance at Sunday sermons required an advance ticket. He recoiled from the designation televangelist, however. “He considered himself a teacher,” Travis says. “He did not seek to convert anyone.”

Travis considers Scott’s flamboyant TV persona a shtick to draw viewers, who would then linger for the sermons. And draw viewers it did: in a 1994 Los Angeles Times article, their tithes were estimated at more than $1 million per month. His faithful wrote on their checks that the funds could be used in any way Scott saw fit, thus thwarting FCC inquiries into church finances. His salary of $1 per year plus unlimited expenses allowed him to live handsomely, collecting stamps, art, Bible texts, show horses and coins. Scott once said that if he were stranded on a desert island, God would provide a market for sand. He was profiled in a 1980 documentary, God’s Angry Man, by Werner Herzog, and lampooned on Saturday Night Live by Robin Williams.

Richard Parker, a lecturer in public policy at Harvard’s Kennedy School of Government, grew up in Southern California watching Scott on TV. “Scott was in the best American evangelical tradition,” he says, “but he oozed contempt for the unwashed masses who attended his sermons. . . . He felt he was the smartest person in the room. Scott’s appeal was in the promise of access to superior knowledge.”

Fans saw Scott as a philanthropist with highly placed friends; a scholar who learned six languages in order to read Bible verse in the original; an enthusiast who painted, played saxophone and owned a vineyard.

Critics called him a cult leader, pompous and an embarrassment to the Christian church. Evangelical Christian ethicist David Gill says Scott “appealed to angry people who identified with his outlaw image.” In the Hereafter, Scott told followers, he planned to “punch Adam in the mouth” for all the trouble he caused mankind.

Scott is survived by his wife, Melissa, and two former wives.

An anecdote in the obituary of Gene Scott characterized Alexander "Lex" Miller as an agnostic. Miller, who inaugurated the curriculum in religious studies in 1950, was a Presbyterian minister.

Before he joined the Class of 2007, Blake Ross revolutionized the way people surf the web.

At any age, nothing beats a taste for learning.