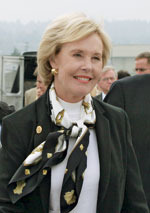 Former Rep. Jennifer Blackburn Dunn, '63 (English), one of the most powerful Republicans in Congress who represented the Seattle area for six terms, died September 5 of a pulmonary embolism. She was 66.

Known for voting conservatively on economic and foreign policy issues and more moderately on cultural issues, Dunn represented the 8th Congressional District, the most affluent district in the state. She was the first woman to lead the Washington State Republican Party and served as chair for 12 years beginning in 1981. After she was elected to Congress in 1992, she became the first freshman woman to win a place on the House Republican leadership team. She also was given a coveted seat on the Ways and Means Committee. Later, she served as vice chair of the House Republican Conference. She was known in Congress for cutting the inheritance tax, sponsoring the Amber Alert law and advocating for free trade.

She retired in 2005 despite President Bush urging her to run for Senate. She was newly married and said she wanted more time with her family. She subsequently joined a Washington, D.C., lobbying firm. Dunn is survived by her husband, Keith Thomson; two sons, Reagan and Bryant; a stepson, Angus Thomson; and two grandchildren.