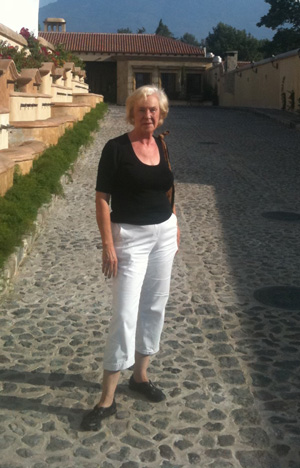 For women of her generation, Gerri Chester was not one to follow a conventional path. She was a graduate of Harvard Law School at a time when the university maintained a 5 percent quota for female students, and later she would be among the first to take advantage of new State Department rules allowing married spouses to serve together. Toward the end of the Ford administration, she was one of two legal advisers on the U.S. delegation that helped negotiate the Panama Canal Treaties. In 1977, under a newly elected President Jimmy Carter, Chester and her colleague drafted the treaties—a task she completed just hours before giving birth to her second child.

Chester grew up in Downey, Calif., a Dodgers fan, band majorette and high school valedictorian. “Her father had wanted a boy,” says her younger daughter, Serana, “and she grew up with thoroughbred racing and baseball.” She went on to major in international relations at Stanford, with a term in Florence and a year at the London School of Economics. When she moved cross-country to Harvard, she felt out of place. A true L.A. girl who had been a cheerleader in the Rose Parade, she later joked with her children that the film Legally Blonde was about her. “Then she blew them all away,” Serana recalls. “She was a deep thinker, always 12 steps ahead of everyone else. People would say she was ‘sweet as pie, hard as nails.’”

Chester was hired as a corporate attorney by Pillsbury, Madison & Sutro, where she was the firm’s third female lawyer—and where she met her future husband, George, ’60. Later, when he joined the State Department and was posted to Durban, South Africa, Chester gave up her legal career. But she soon found herself writing confidential State Department reports on a major terrorism trial, despite not having the requisite security clearances, and she came to know the student leader Steve Biko and the Zulu leader Mangosuthu Gatsha Buthelezi as the anti-apartheid movement gathered steam.

The couple returned to Washington, D.C., where their first child was born and, following a policy change that permitted spouses to join the Foreign Service, Chester sat for and passed the exam. Soon they were stationed in Panama City, where she took part in the initiative to return the Canal Zone (taken over by the United States in 1903) to the Panamanians. The treaties were signed in September 1977, and the Chesters named their second daughter Serana, a contraction of the Spanish word soberana, signifying sovereignty. In 1979, Gerri received the W. Averell Harriman Prize from the American Foreign Service Association for her role in crafting and implementing the treaties.

After a stint at the U.S. Embassy in Brussels, the Chesters returned once again to D.C., where Gerri was assigned to Philippine affairs. She played a key role in American military base negotiations and in planning the U.S. visit of President Corazon Aquino, whose election in 1986 ended the long dictatorship of Fernando Marcos. In 1991, Chester was sent to Guatemala to serve as economic counselor and then as deputy chief of mission before retiring in 1997.

The Chesters adored the architecture of colonial Guatemala and built two houses designed by a local architect, with airy loggias, wrought-iron balconies and carved doors. One was in the old capital of Antigua, where they spent part of their retirement, and the other in Fernandina Beach, Florida’s second-oldest Spanish settlement.

An active member of the Florida Democratic Party, Chester traveled extensively, offering her expertise as an election observer in Albania, Macedonia and Kazakhstan and with the Carter Center in Liberia.

She is survived by her husband; children, Elizabeth Lercara Chester, Serana Sciarillo and George III; and one granddaughter.