Dubai investors are trusting Steve Tight to build them a Mideast fantasyland. 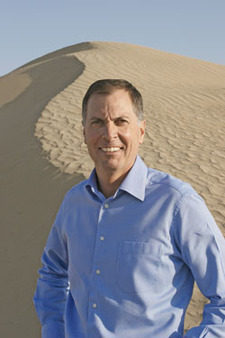 Developer Steve Tight looks out of his office onto a skyline that seems a cross between a burgeoning financial district and a Las Vegas on steroids. Skyscrapers wrestle construction cranes—active 24 hours a day—for space in the sky, and the sound of drilling never stops in Dubai.

Just 15 years ago, Dubai, an emirate on the Persian Gulf where oil revenue accounts for only 6 percent of gross domestic product, was nothing more than a few buildings in the middle of the desert. But a real estate development boom, the Jebel Ali free trade zone, and tourism have transformed the region. Within a few years, Dubai will claim the world’s tallest building (although the final height of the Burj Dubai is a secret, its 146 floors already have surpassed the Sears Tower) and the world’s biggest waterfront project. A collection of several hundred man-made islands arranged in the shape of a world map is being built; some of the yet-to-be-finished islands already have sold for $15 million and up.

“The expectation in Dubai,” says Tight, ’77, about the fastest growing of the United Arab Emirates, “is that things have to be almost monumental. I call it the ‘est’ factor. They want the tallest, the biggest and the longest. Everything is over the top.”

Amid the dizzying development, the projects that Tight manages have plenty of “est.” An architect graduate who spent 17 years working to set up Disney theme parks around the world, Tight is the chief executive officer of Al Sharq Investment. He manages seven major projects in Dubai (a combined $3 billion in investments), overseeing the construction of a luxury hotel, residences, office space and a water park named Aqua Dunya.

The water park is the centerpiece of Dubailand, a 3-billion-square-foot fantasyland that will be the Middle East’s first major theme park when completed. Dubailand, which broke ground in May and should be finished by 2010, is a government initiative to “create an Orlando of the Middle East.” Part of Dubailand’s goal is to raise the bar for family entertainment in the region to a Disney standard using a Middle Eastern overlay.

That standard includes a narrative: Aqua Dunya tells the story of a 19th-century boy named Rakaan who leaves home to make his fortune traveling the world. (“Like Aladdin, but told in a sophisticated manner,” Tight says.) The seafarer comes back to the desert to build a ship for his family. A new cruise ship at Aqua Dunya will be a theme-park focal point equivalent to Sleeping Beauty’s Castle at Disneyland and will serve as a five-star hotel. The ship will be longer than the Queen Elizabeth II with a Jules Verne-meets-Arabian Nights look and feel. (In June, the Dubai government paid $100 million for the Queen Elizabeth II itself, to turn it into a floating hotel.)

Tight has been using lessons he learned at Disney, such as the need to build enough rides and attractions at the start to make tourists’ visits worthwhile, rather than waiting for capacity to grow—a conclusion reached at Hong Kong Disneyland. But building a water park in a desert poses a slew of new issues. Temperatures in the area reach 120 in the summer. “There are certain kinds of [building] materials that cannot be used because of how hot surfaces can become, so we are working with different shadowing and shading of surfaces.”

And beyond the concrete issues there are the cultural ones. Aqua Dunya was chosen to be a water park to be appealing during the hottest summer months, but many women in the Middle East can’t or won’t wear bathing suits in public. Half the water park’s attractions will therefore be dry rides cooled by misting, so that everyone can appreciate the natural air-conditioning of water.

Tight leads the development, coordinates with the architects, manages a team of 11 (which will grow as the company’s project portfolio does), meets with investors to help raise more money and works with the marketing team to expand the company’s brand presence.

“Steve has the unique ability to understand the market, translate this knowledge into a compelling product, and work within the local culture to realize the vision,” says Al Sharq’s chair Ali Al Shehri, who is from Saudi Arabia. “He has an open mind and patient and thoughtful approach, which allows him to be most effective working in the Middle East.”

Critics believe Dubai is growing too fast and that soon the market for new buildings will become oversaturated. Roads and other infrastructure have not kept pace with the rest of the emirate’s growth. And there is a huge economic disparity between the local population and the new expatriate community, on the one hand, and the vast imported labor force that fuels 24-hour construction, on the other. “Dubai is not short on ideas or ambitions. It’s very short on inhibition and caution, which generates the amount of development going on,” says Al Sharq project mananger Andrew Turner, a Briton who has lived in Dubai for 12½ years. “Dubai’s philosophy is to supplement experience it doesn’t have through hired hands.” Tight says he’s “bullish” on Dubai’s growth. “There is a leap of faith with the building—a feeling of ‘build it and they will come.’ It has worked so far. Office space vacancy is under 1 percent.”

It will be at least four more years before the projects Tight is working on are completed. In the meantime, he, his wife, Chris, and their children, 4-year-old Charlotte and 3-year-old Griffin, are getting invaluable exposure to a world often distorted in American media. “I feel very fortunate,” Tight says. “It’s rewarding to be exposed to the Arab world and the Muslim religion.”

His children attend an international school equipped with a planetarium and swimming pools. His family loves the Ramadan celebration and the vibrant life at night that occurs when the fasting ends at sunset. He feels safe in Dubai and often doesn’t lock his doors.

And like every newcomer to a different land, he has a story about a mishap of cultural understanding.

Tight recalls how he had Al Sharq chair Al Shehri and his wife over for dinner. “He went to wash his hands in the bathroom and saw a mirror we found at a flea market hanging above the sink. He came back white and said, ‘you can’t have quotes from Allah in the bathroom!’

“We had no idea that was what was on the mirror. We immediately moved it.”

DEVON MAYLIE, ’05, is a journalist based in London.