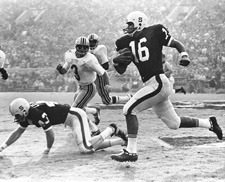 Jim Plunkett was the first name I ever associated with Stanford University. I was 11 years old, living in a tiny town in Iowa, watching him help beat Ohio State in the 1971 Rose Bowl. For weeks after that, my brother and I pretended to be Plunkett and one of his favorite receivers, Randy Vataha, in our backyard football games.

If Plunkett were a more typical celebrity athlete—spoiled by privilege and convinced of his own awesomeness—my childhood memories of him might have been jaded by a grownup realization. I'm happy to report that I admire Jim Plunkett more now than I did when I was a kid.

He is that rare sports figure who wears fame lightly, who honors his friends and respects strangers, who hasn't abandoned the values he learned during a scrappy childhood, bouncing from house to house whenever the rent went up. Plunkett's life has been a series of triumphs over adversity, both on and off the playing field. Pain is his constant companion. Plunkett embodies a set of qualities that could describe many Stanford student-athletes: unselfishness, confidence without swagger, relentless commitment. He deflects attention and gives credit to others.

Great athletes who are also great people are tremendous ambassadors for the University. They project success and inspire pride, not simply because they can throw a perfect pass but because they are honorable, decent and worthy of acclaim. It's appropriate that we profile Plunkett at a moment when Stanford's resurgent football program features players and coaches whose defining characteristic is a grinding work ethic. Makes it easy to root for them, huh? And so it was with Plunkett.

Grand metaphors attach easily to sports heroes. And in football, a game of collisions, the intense physicality compels writers to get all weepy about resilience and toughness. Far be it from me to depart from tradition.

I wrote an essay a year or so ago about Toby Gerhart, the thunderous running back who captivated Stanford fans last season with his Sisyphus-like striving. Gerhart finished second in the Heisman Trophy balloting, and my essay, planned as part of a commemorative tribute, was never published. But now that I think of it, the final lines of that essay also apply to the player who did win the Heisman all those years ago. Because, like Gerhart, Jim Plunkett exemplified the best parts of ourselves that we see in football players—indeed, in any person—we admire. They can take a hit and keep going. They never give up. People like that, it's hard to get them down.