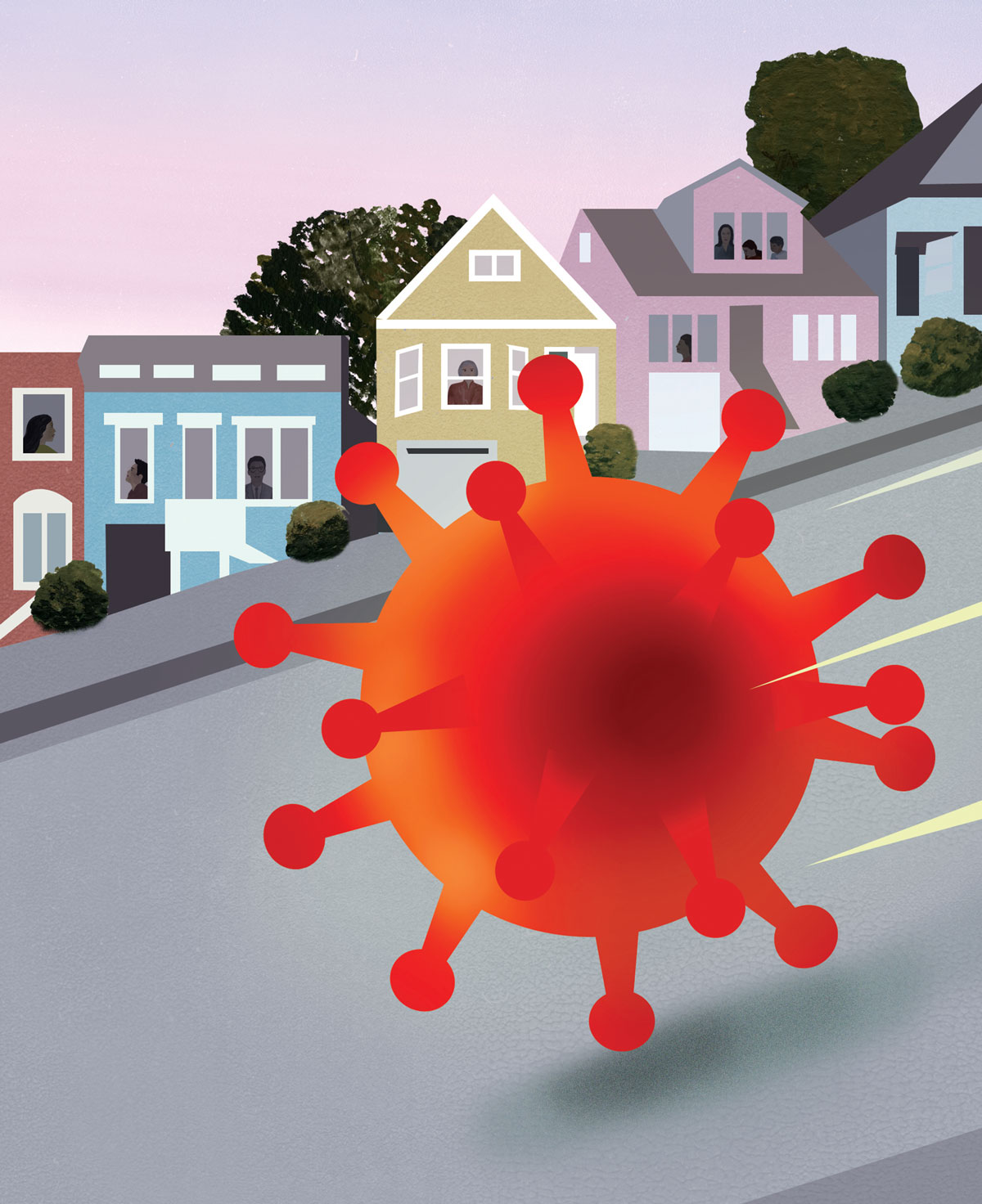 Since 2014, Kathy Jurgens Lofy, ’93, has been the health officer and chief science officer for Washington state, where she advises the governor and the secretary of health on disease prevention, emergency response and health promotion. At Stanford, she majored in human biology and was a defensive specialist on the volleyball team. After completing an MD at UCLA and a residency at Children’s Hospital Oakland, she trained as an epidemic intelligence service officer with the Centers for Disease Control and Prevention. Having served as Washington’s influenza surveillance coordinator, she knows the data systems used to track viral respiratory illnesses—knowledge that has served her well since the outbreak of COVID-19.

Here, Lofy tells the story of COVID’s arrival in Washington state and the efforts made by her and her colleagues to limit its spread. 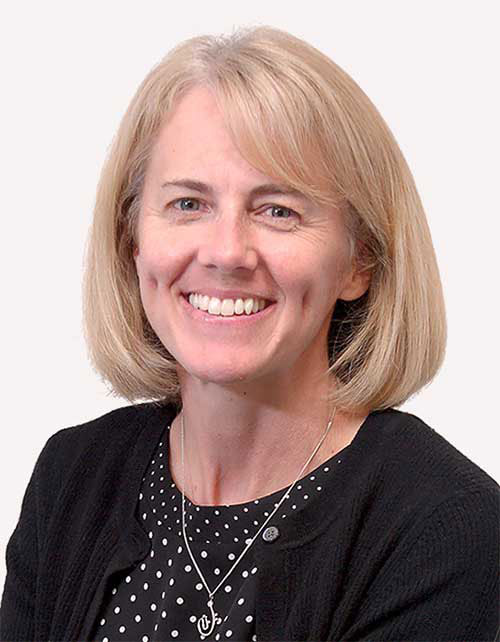 STANFORD: When did you become aware of COVID-19?

Lofy: I first became aware of it when the reports started coming out of China. I think that was sometime in December of last year. As public health officials, we keep an eye on things going on around the world because we know they can show up in our state or county, so we were aware of the outbreak in China. I became really concerned when it started spreading to other countries and other countries weren’t able to contain it—and particularly when we started seeing cases that weren’t linked to travel.

When did you realize how serious it was going to be in the United States?

I knew it was going to be serious here when I saw what was happening in Europe. I knew we’d have a very big outbreak.

What sorts of decisions did you begin making to protect people in Washington state? What was the lead-up to having people shelter in place?

On January 21, we had the first reported case in the United States. We did a very extensive contact investigation and identified about 70 contacts of that particular patient, and none of them became sick with coronavirus. We didn’t have the capacity to do a lot of testing after that case occurred because the CDC lab was the only lab doing testing at the time and we could only send them specimens that met certain criteria. Then we detected a second case in the same county, and that individual had not traveled. A laboratory sequenced the virus from both the first case and the second case and thought that the virus was very closely related, suggesting that the virus had been circulating in the state for a while. Almost simultaneously, we had an outbreak at a long-term care facility with a high attack rate, which means a high proportion of both residents and staff became infected, and several had very severe illnesses. That we had this outbreak and detected the second individual from the same county as the first suggested that the virus was potentially circulating in that area for about six weeks. At the time, we had been working with a modeling group that assumed that the virus had been circulating in Washington since the first case arrived and modeled out six weeks later how many cases we would expect to have. As you’re probably aware, the reproductive rates of the virus without any community mitigation strategy is thought to be two or three. So for every individual who’s infected, they pass the infection on to an average of two to three additional people. That means exponential growth if one person passes it to three and then each of those three patients passes it on to three more. You can imagine how quickly the disease can spread. So it was really then that we were pretty concerned. The modeling data suggested that there were probably already thousands of people infected, and we knew that we needed to act quickly, because we didn’t want what happened in Iran and Italy to happen in Washington.

Once you knew COVID was here and spreading in thousands of people, what were the decisions you made to protect people and how did you evaluate those decisions?

We had been planning for an influenza pandemic for years and years. We always knew with influenza or other viral infections that if we had a new virus that started circulating and very little immunity to it in the population and no vaccine or treatment, we would have to use what we call nonpharmaceutical interventions or community mitigation measures. These are things people in the public can do to prevent the spread of the disease. Since we don’t have a vaccine or a good treatment for COVID, we knew that people needed to change their behaviors to slow down the spread. There’s a list of different community mitigation strategies that could potentially be taken. The first ones are the types of strategies that we recommend during every influenza season. That’s washing your hands, staying home when you’re sick, staying away from other people who are sick, and frequently cleaning surfaces.

The second group of measures revolves around what we call isolation and quarantine—so making sure when people are sick that they’re staying home for a certain number of days while they’re still infectious, and making sure individuals who are exposed to people with COVID stay at home and away from other people for 14 days because that is the known incubation period.

Then there are the more extreme strategies, which, quite frankly, we really hadn’t used in the U.S., like closing schools, closing businesses, social distancing strategies. When we knew we had to take measures, we needed to figure out which tools out of this nonpharmaceutical intervention toolbox we wanted to try. We initially started with recommendations to make sure that offices and businesses let people telecommute to the greatest extent possible and asked people to stay at home and not be around others. Then, as the disease increased rapidly, we closed schools because with other respiratory viruses, kids actually drive the transmission. So we were concerned about kids spreading it at school, although we still don’t fully understand the role that kids play in the spread of COVID. After we closed schools, on March 25, our governor did a stay-home, stay-healthy order because at that time our case counts were still climbing fairly rapidly and our hospitals were getting busier and we wanted to keep people away from each other as much as possible. So the order required all residents of Washington to stay home unless they were leaving for essential services, and we required all nonessential businesses to close.

You mentioned that the United States has never taken these sorts of measures before. Are there other countries that have taken these measures and that epidemiologists and public health professionals have studied?

When we do our communicable disease investigations, we use concepts of isolation and quarantine, so that really wasn’t new. I think what’s been unprecedented is closing schools and nonessential businesses. I can’t say that it’s never been done around the world, but it certainly is not done very often. I’ve been working in public health for 20 years and have never needed to take measures this extreme.

Stay-at-home measures often disproportionately affect low-income and vulnerable populations that are already at high risk for COVID, further endangering them by cutting them off from a revenue stream or making it harder for them to participate in the economy. How did Washington state take that into consideration when making a stay-at-home order?

We’ve been very concerned about vulnerable populations since the outbreak began and the economy from the perspective of people who live from paycheck to paycheck. We know in public health that a person’s economic situation strongly influences their health. So economics is a health issue to people in public health as well. We try to find the balance between protecting the public’s health and opening up the economy enough so people can work and provide for their families.

Did Washington state take any action to address those concerns while making the stay-at-home order?

There were a number of measures that were put in place from the other state agencies that run some of the social and safety net programs. Measures were put in place to try to protect people. The center that runs our unemployment program has been very involved in trying to enroll people so that they can continue to get paychecks, and there’s been a lot of work done to bolster food banks. I know our National Guard has been working really hard to make sure that food is available to individuals. We also wanted to make sure that childcare was still available. A lot of people use school as their day care, and with schools closing, we wanted to make sure that those people who were working the essential jobs, like in grocery stores and pharmacies, still had access to some sort of childcare so that they could continue to work. So there have been a lot of different considerations that have been taken to minimize the impact from the economic perspective. There have also been federal grants and loans that have been available to businesses as well as to people to get through this really challenging time.

Why do you think the West Coast has been less affected than the East Coast? Is it because of policy, or is the West Coast just fundamentally less concentrated and people drive more?

I’m sure it’s multifactorial. I definitely think that density population in New York City contributed in some way to the explosiveness of their outbreak. I’m sure that there are other factors that have played in as well. We are finding that our larger, denser population areas are having bigger outbreaks than smaller, rural counties. Part of it also depends on how much testing you were doing earlier when COVID actually got to your state and when it was detected in your state, whether it arrived in New York City at the same time that it arrived in Washington but was just undetected. They were probably already in an exponential growth phase of the outbreak without even really realizing it, and then they just started to test at that point, but they couldn’t see the whole iceberg underneath the water.

Since COVID started, are there any moments in particular that stand out to you and that you will never forget?

A moment for me was when we detected the second case in Snohomish County and that person had not traveled anywhere. I distinctly remember getting the results back from a number of people involved in a long-term care facility outbreak. I think it all happened in the same weekend, and it was during that time that it definitely hit me: It’s here—it’s definitely here and spreading in our population.