My aunt's grace puts everything in perspective. 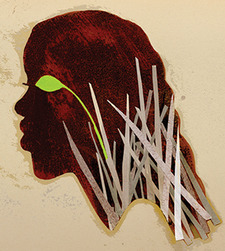 Thanks to my Uncle Paul's decision to live in Africa for the past 30 years, only one picture exists in the world with all of my mother's family included. His wife, Claudine, commands the focus in the portrait. The vibrant colors of her clothing stand out against the gray photo studio backdrop. Her long black hair and dark skin stand out against our pale Irish complexions. She has the angular face, high cheekbones and poise characteristic of Tutsi women.

The first time we met, she studied me with wide eyes and exclaimed, "You look just like me!" I was mystified until I realized she was pointing to the gap between my two front teeth, a trait typical to both second graders and Tutsis.

It was 1996, and the word Tutsi made me think of Tootsie Rolls. I did not comprehend that Claudine had recently escaped a genocide in which most of her family was killed. Certainly I didn't know the word rape. It was years later when I learned that Claudine's mother had hastily sewn her skirt together between her legs, preserving her dignity minutes before she was killed with a machete.

Claudine, my uncle and my two cousins had fled Rwanda with the clothes on their backs. In the United States, Claudine—fluent in French, English and a Rwandan dialect—studied for degrees in psychology and counseling. She then returned to Rwanda to create her own television show. I understand that it's similar to Oprah Winfrey's—a talk show in which Claudine asks her guests questions like "How do we grieve?" or "Why do we lie?"

A decade after the genocide, in 2004, she helped open the Kigali Memorial Centre, established so that some 250,000 victims of the genocide could be reburied with respect. It was an emotionally painful undertaking, especially when she washed the bones of family and friends. But it also offered some closure.

I've spent time with my aunt on only three occasions, yet she's often on my mind. I can be a drama queen, groaning at the agony of finals or the frenzied pursuit of a summer internship, but Claudine's story reminds me that my life is remarkably pain-free. Seeing things through the lens of my aunt's life always provides perspective. College challenges are reduced to what they are: opportunities to be embraced, not endured.

A couple of months ago, I ventured outside of Green Library for a study break at Coupa Cafe. There, sitting at a table with a group of athletes, I saw a guy I had been set up with on a terribly misguided blind date. Eager to avoid an awkward conversation, I stuck my sandwich in my pocket and scuttled back into Green.

One day in 1996, Claudine picked up a sandwich at a little restaurant in Nairobi, Kenya. There, sitting at a table with a group of Rwandan exiles, she saw the oldest son of the man in her neighborhood who had organized the massacre of her parents and all of her Tutsi neighbors.

I have a ways to go before I can handle even my petty problems with a modicum of Claudine's grace and refinement. But her example constantly reminds me not to take my family or the limitless opportunities in my country for granted. And what amazes me most about Claudine is the joy she brought that first time we met, so soon after she faced one of the most grisly events in history.

In third grade, when I needed braces to close the gap between my teeth, I was bizarrely excited to be one of the first of my friends to get braces. However, for a fleeting moment, I was also sad to lose my special link to elegant Aunt Claudine.

NINA BRENTLINGER, '12, is a communication and psychology major from Seattle.