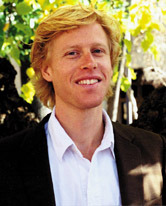 A few of us slept outside the English department the night before registration, autumn quarter of my junior year, to get into a class called American Realism and Naturalism. Were we drawn by the imminent study of Moby Dick? Compelled to investigate the inner workings of McTeague? Well, yes, since we were all literature nuts; but we were also drawn by curiosity. Who was this Professor William Solomon? We had heard he was young, a genius. We were intrigued, and somewhat besotted, by this new and unknown figure on the faculty.

We were not disappointed. In 1993, William Solomon brought to the English department a fresh spirit of enthusiasm and academic rigor. We found him to be a bit nervous at first, his head cocked down toward the 18 pages of notes that he read to us word for word. But as time went on, Professor Solomon realized a simple truth: we were rooting for him. His confidence seemed to grow exponentially. We were engaged, and we remained engaged throughout the quarter.

I won’t deny that a little group of us probably had a crush on him. To me, he was a dead ringer for Howard Roark (played by Gary Cooper) in The Fountainhead. My classmate Katy and I would give each other “Howard” signals whenever we saw his tall frame approaching from across the Quad.

More important, however, he inspired us. I cast aside plans to write a thesis about the 18th-century epistolary novels as he turned me on to an entirely different world of fiction. He is the sole reason I fell in love with and remain fascinated by Kate Chopin, the novelist who scandalized Victorian society with The Awakening. In his gentle way, he both guided and propelled us through one literary landscape after another.

William Solomon was affectionately known as Bill among his fans, although many of us continue to call him Professor Solomon when we speak with him. For me, the choice is born less of scholastic etiquette than of lasting respect for this man who came to me brand-new and left me with a brand-new vision of myself and my work within the literary field. I am forever indebted to him—to Bill, to Howard, to Professor Solomon.

Fit to be Dyed

With 50,000 images to choose from, web shoppers can tailor a T-shirt.