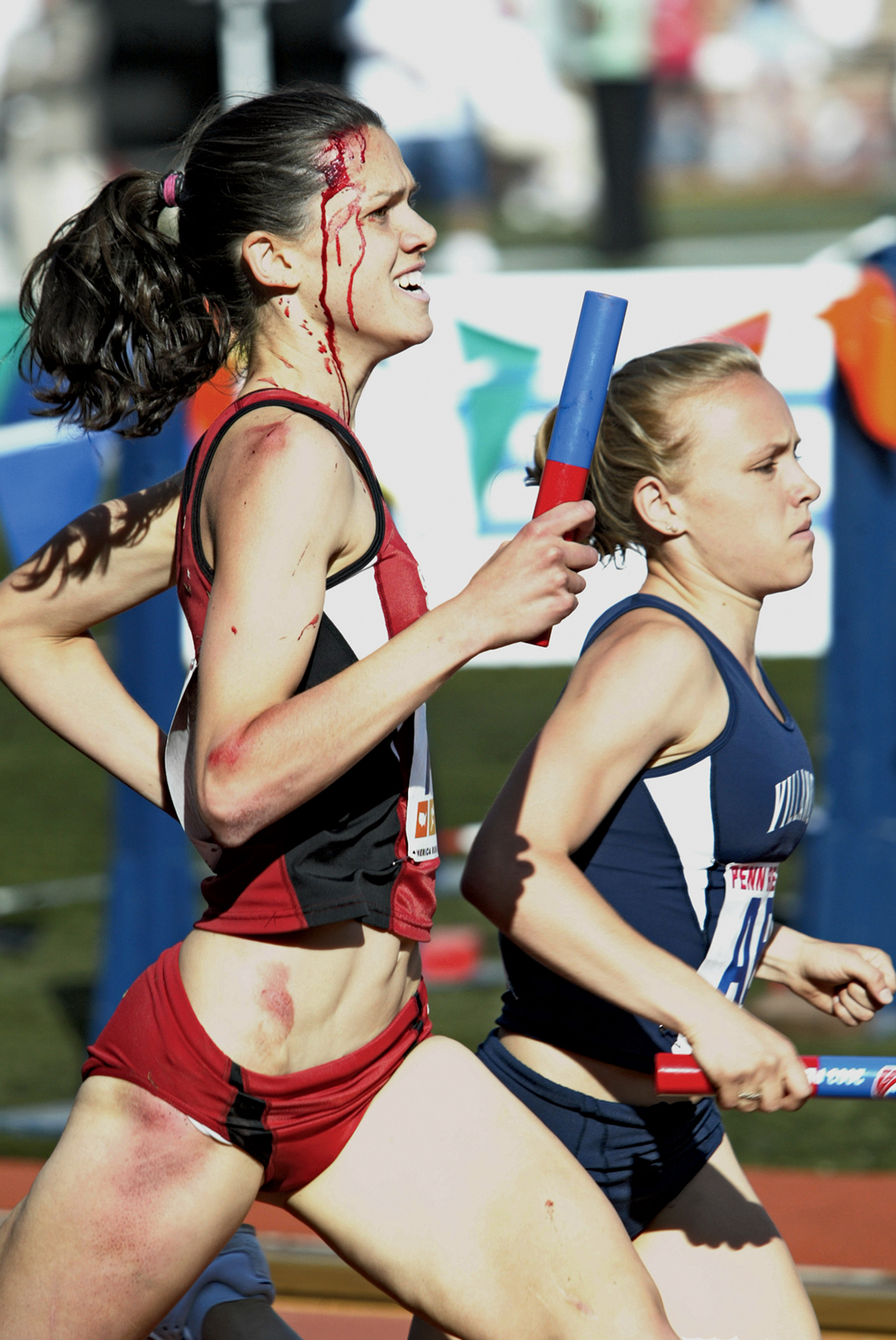 Blood can paint an indelible portrait, as Alicia Follmar learned last spring. The Stanford runner was just over a lap into the first leg of the distance medley at the Penn Relays in Philadelphia when she was tripped accidentally from behind. She fell hard, and six or seven runners appeared to go straight over her.

What happened next was captured in unforgettable photos: Follmar got up quickly and regained her stride, while long streams of blood flowed down her face and neck. She had been spiked in the forehead, showed nasty abrasions up and down her right side and generally looked liked someone running in the Freddy Krueger Invitational.

As she powered her way from 10th to third over the remaining two laps, she ran into Internet-lauded fame. There's far more to the two-event All-American than that one race, but no pictures of her are anywhere near as memorable.

“I wouldn't say it was as bad as it looks . . . . I can't say it really hurt, there was so much adrenaline,” says Follmar, now a senior. “There was a feeling that I had in my head—like a sensation in my head—so I felt my head with my hand and looked at it, and there was blood on it. At that point, I was already running. I kind of panicked, but I still kept running.” Stanford finished third.

All the best clichés—dedication, determination, tenacity—can be justified by that performance alone. But Follmar, a human biology major who is applying to dental schools, is intent on overachieving throughout her last year of running at Stanford. She was the women's champion in the opening cross-country meet, the August 30 USF Invitational, serving immediate public notice that she has “big goals” for every event in which she competes. She hasn't made a checklist of objectives that span the cross-country, indoor and outdoor seasons because, basically, she wants to do it all.

“I don't really know what I want,” she says, thinking out loud. “I want to be All-American. I want [Stanford] to win a national championship again in cross-country. I just want to be one of the best in the nation.” Stanford has taken the title three years in a row.

Whatever Follmar accomplishes, it will be rooted in a fortitude that became conspicuous during high school in Saratoga, Calif. She was a sophomore when well-known Saratoga High track coach Marshall Clark collapsed and died at practice.

Clark, an assistant coach at Stanford from 1968 to 1978, was renowned for his leadership, and his impact on Follmar turned out to be profound and poignant. Debbie Follmar, Alicia's mother, remembers how shaken her daughter was by Clark's death. “She got on her cell phone,” she recalls, “and she was crying hysterically. I finally made out that Marshall had died, and I couldn't believe it. Then I started crying, too.”

Six years later, Alicia Follmar remains conscious of how powerfully she was influenced by Clark's life and death. “I'm not crying about it at night anymore and stuff like that. But it's still, you know, on my mind. . . . It's kind of nice to be able to run in his memory a little bit.”

After Clark died, says Follmar, the Saratoga High runners looked to each other for emotional support, and she found a strength and self-confidence that seemed almost new to her personality. Today, it is those qualities that define her in the minds of others.

“Committed is the word,” says Edrick Floreal, Stanford's director of track and field. “There's a level of commitment that goes toward her team and Stanford that is unparalleled.”

Follmar, 5-foot-10 with a big back kick, has run since she was very young, sometimes with her mother, who has logged six miles a day for 35 years. Alicia was a state champ in the 1,600 meters as a high schooler; at Stanford, she won All-America status in the indoor mile and distance medley relay as a junior.

If everything clicks, Follmar may have people talking about numerous athletic moments besides the Penn Relays exploits. The problem, though, is how rich in detail that one blood-streaked day is.

Consider this: one of her three older brothers is a plastic surgeon who was at the race. The family is still talking about how much he would have preferred to stitch up his sister's spike wound instead of its being done by the podiatrist on duty. There's also the dramatic residue. One lap of merely running, then two laps of courage.

“As much as I was unhappy that she got hurt,” says Floreal, “I was pleased that people could see what Alicia Follmar is like.”

How to Improve Your Memory

All that info you put in your noggin isn’t much good if you can’t pull it back out. Try these 3 tips for boosting your recall.