How to Talk to Strangers

Meeting new people can be uncomfortable. You should do it anyway.

My mom routinely asks people two questions: “What is the best part?” and “What is the worst part?” Whether she is talking to a waiter about their hometown or querying my friend about career plans, she loves to engage, and she finds this to be a powerful way to get a conversation flowing.

Most of us aren’t like my mom. We’re uncomfortable talking to strangers. And in a world where the answer to virtually anything can be googled and where (thanks to Netflix on our phones) we never need to be bored waiting in line, we’re not getting much practice. But jobs, friendships, and romance all start with talking to someone you don’t know. Feeling connected to others is linked to better psychological and physical health. What’s more, new connections open our eyes, says Sarah Stein Greenberg, MBA ’06, executive director of Stanford’s d.school. Her book Creative Acts for Curious People: How to Think, Create, and Lead in Unconventional Ways includes a chapter on how to talk to strangers. She offered some tips on getting started. 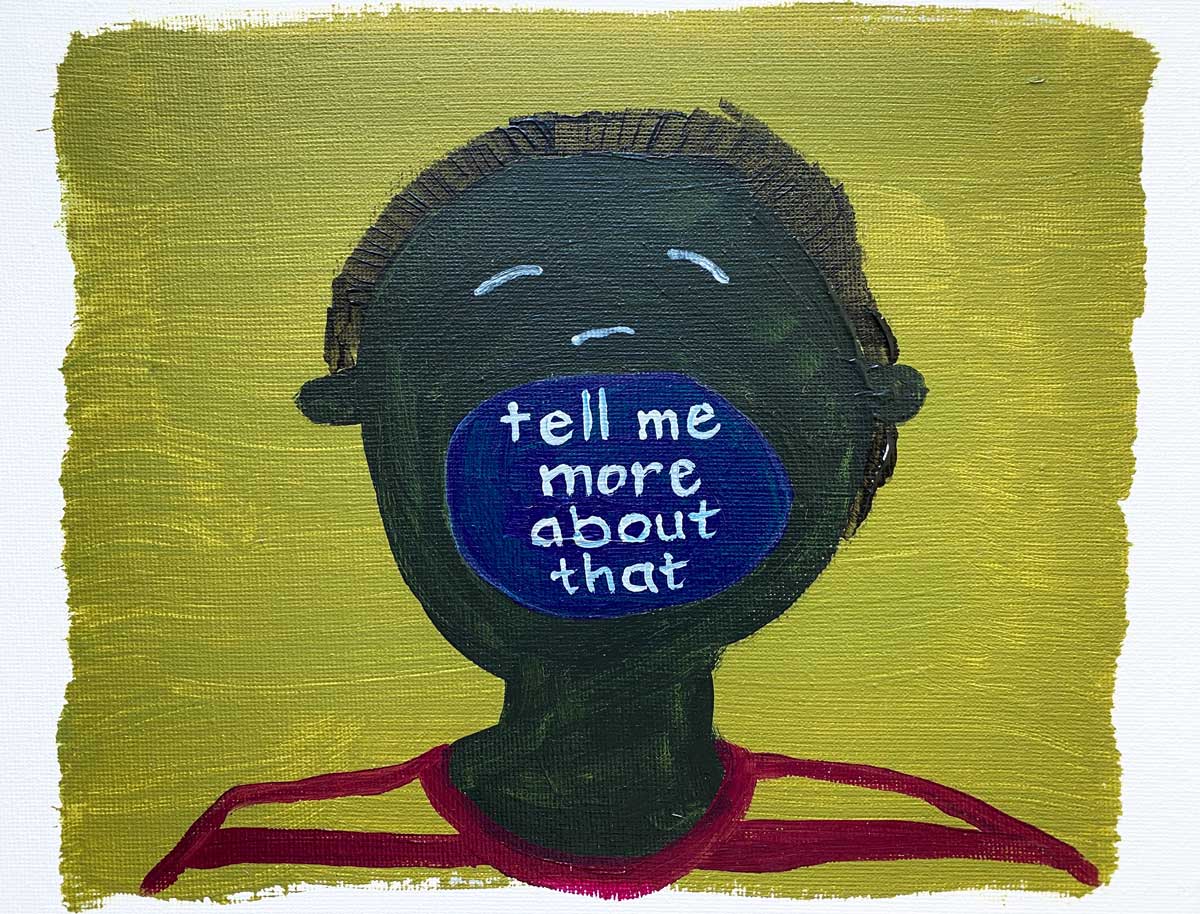 Go in with an open mind.

“I think one of the things that is hard for us to remember is how much we don’t know that we don’t know,” Stein Greenberg says. “You often can be surprised by what you learn through a live interview or through a human connection. That is just tremendously valuable for getting past our own biases or past our own routines or habits of mind.”

Plus, some opportunities—think job networking—aren’t possible without pushing ourselves outside our comfort zone and reaching out to someone new. Talking to a stranger in Trader Joe’s helps build that muscle before you get to a networking event. But even without a goal in mind, speaking with a stranger can reap unexpected dividends.

“There’s also just the delight, the joy, the fun, the serendipity,” says Meenu Singh, MS ’20, a lecturer and learning experience designer at the d.school. Her work with Erica Estrada-Liou, ’05, MS ’07, MBA ’13, director of curriculum and experiential learning at the University of Maryland’s Academy for Innovation & Entrepreneurship, is featured in Stein Greenberg’s book. “I remember meeting a neighbor accidentally. We both were remarking on some type of flower in Golden Gate Park, and then it turned out this person lived next door!” 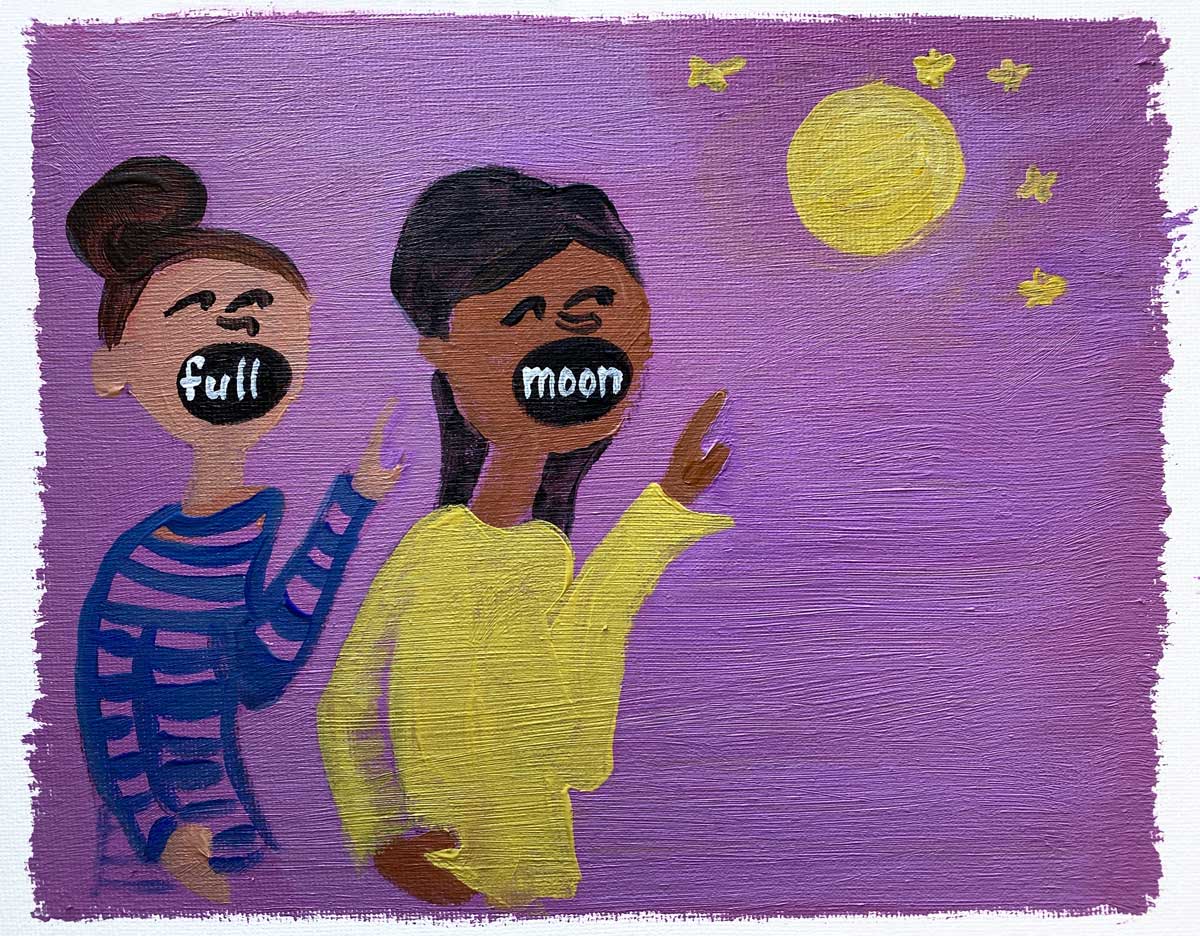 If interacting with strangers requires muscle, you might want to start with light weights. Creative Acts for Curious People includes three specific exercises for practicing. First, simply walk a trafficked path and say hello to each person you encounter. After your “mission,” reflect on the experience: How did people react? How did your own behavior change? The second activity seizes on triangulation—starting a short back-and-forth conversation about the place you’re at, the weather, or any commonality, like when Singh and a stranger chatted about their shared experience of looking at a flower. The third and most advanced workout, which is detailed in the book, involves a multipart interaction around asking for directions. “I was extremely shy as a child and young adult,” Stein Greenberg says, “and even now have a strong dislike of small talk.” That’s why these activities are good to practice. They provide “a structured way to push yourself, just a little bit at a time, to confront your shyness and challenge your own assumptions about what might happen when you talk to a stranger,” she says. “And it gently helps you take the first small steps toward brokering a genuine connection with others.”

Looking for a virtual option? Stein Greenberg suggests calling (yes, using your phone’s phone feature) one place you can count on finding someone who wants to talk—the office of your local government representative. “If you’re feeling rusty on making that human contact, that’s a great place to practice it.” 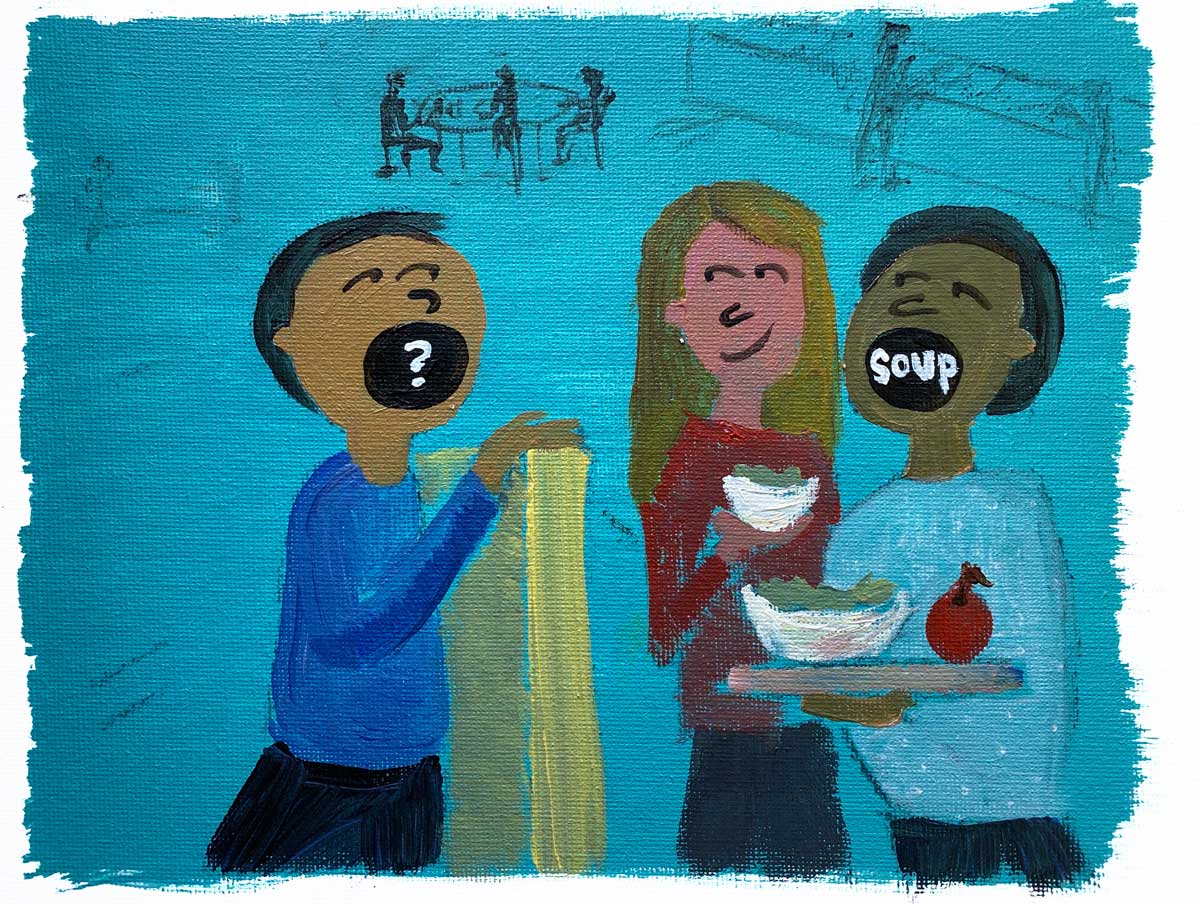 However you jump in, don’t assume you’ll be rejected. “It’s a barrier that we put on ourselves that people are not willing to connect, when, really, I think people are hungry for connection,” says Singh, who coaches students, faculty, and folks in organizations to work in more innovative, collaborative, human-centered ways.

If you’re asking for something like an informational interview with a Stanford alum you found on LinkedIn, pave the way for a yes by asking for a short, specific amount of time—maybe 10 or 15 minutes. And in your initial message, explain why you picked that person and what you hope to get from the connection.

Some people will say no—and that’s OK. Even the creator of the famous Humans of New York blog and book, Brandon Stanton, who photographs and interviews people he encounters randomly in New York City, hears no more often than yes, Singh says. Stanton has said in interviews that on a typical day in New York, at least half the people he approaches will turn him down. 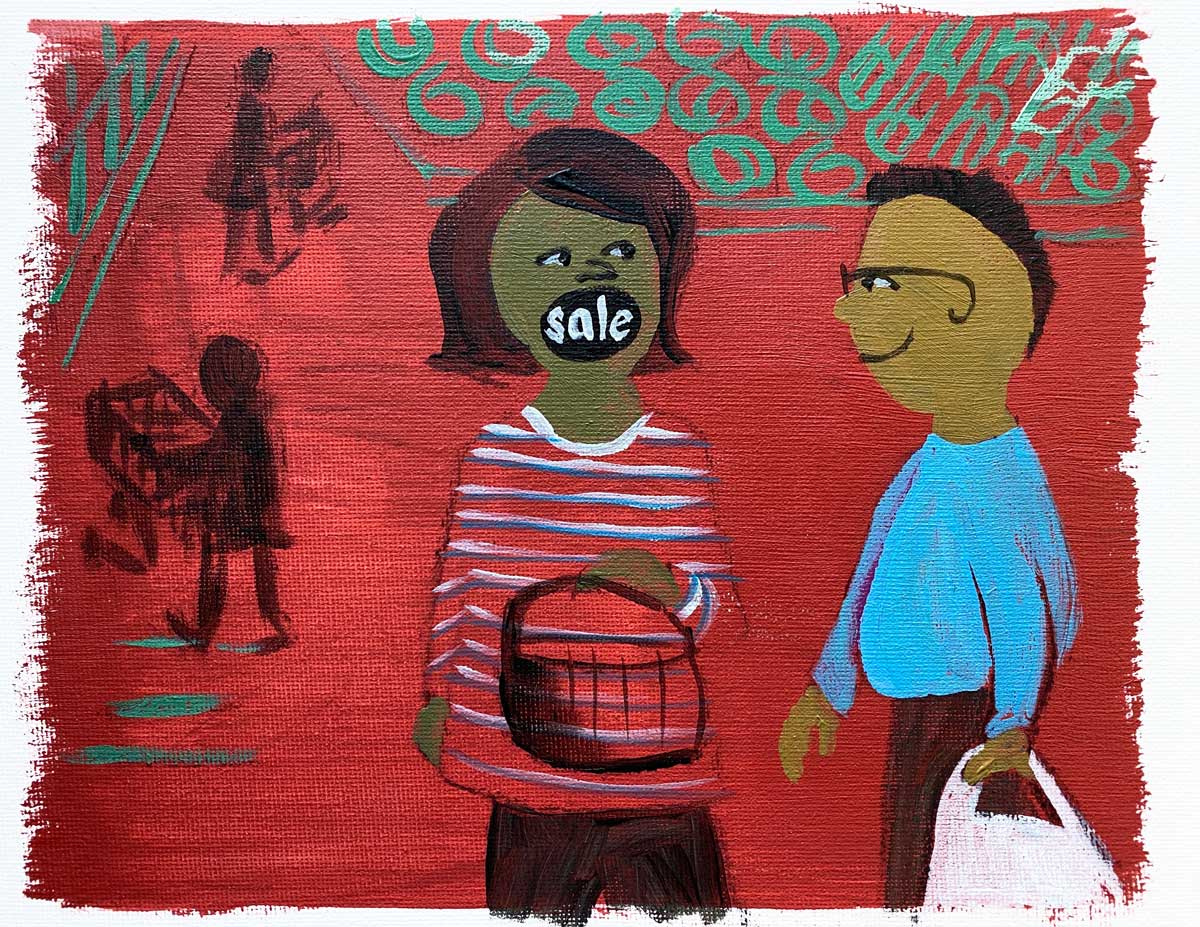 Remember: This is not a survey.

Go into more structured conversations (informational interviews but also first dates!) with a flexible plan. Have questions ready, but don’t launch right in. “Connect personally before talking shop,” Singh says. Also, remember that a conversation is different from a survey. You don’t need to get through every question. Be open to where the moment takes you.

“It is about letting the conversation go organically where it does,” says Stein Greenberg. “That takes both deep listening and a willingness to follow up and say, ‘Can you tell me more about that experience?’ instead of saying, ‘OK, next question.’ ” In addition to listening, Singh advises resisting the urge to fill silence, even if it feels awkward. “Someone could be thinking or taking a moment of reflection,” she says. 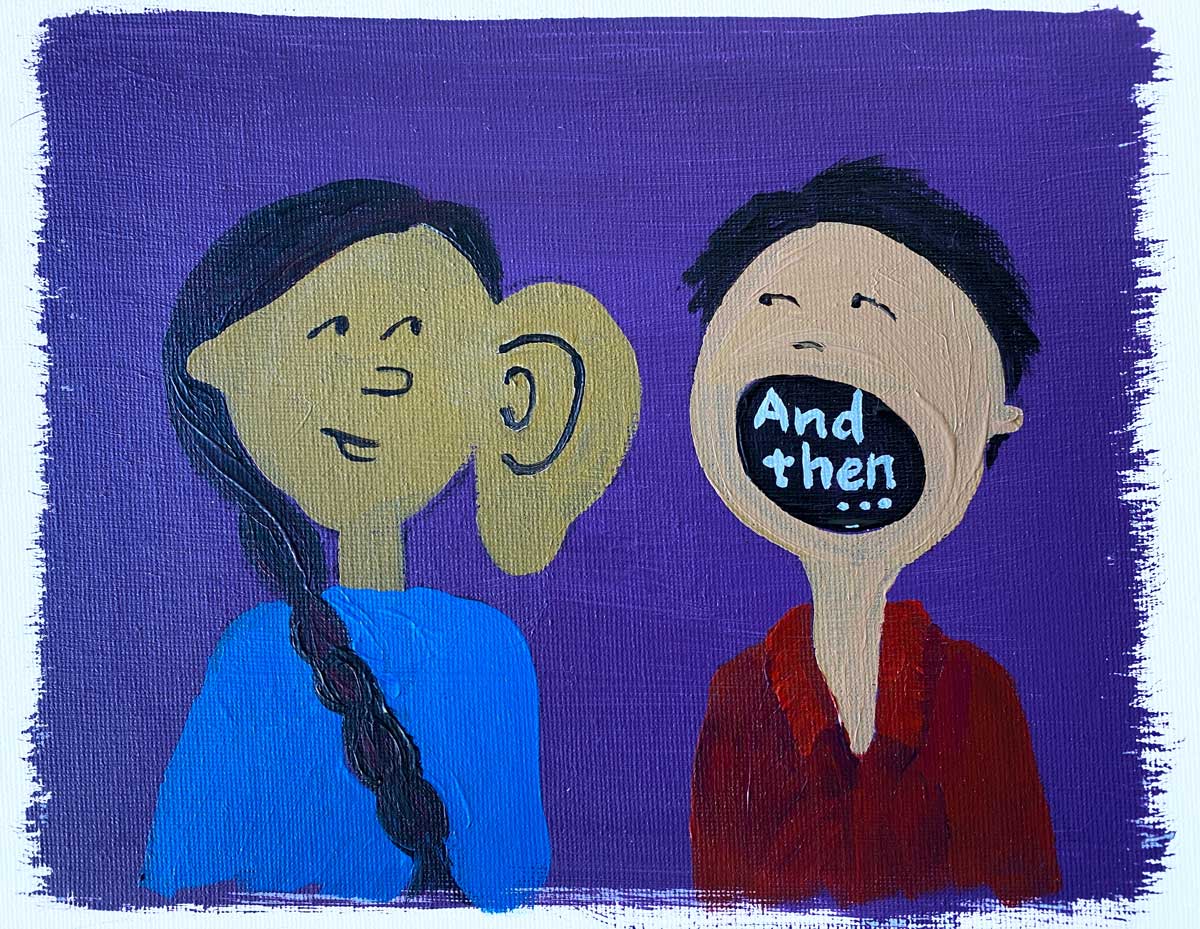 Engaging with strangers can bring unexpected gifts. Once, at a restaurant in New Orleans, Singh struck up a conversation with the couple at the next table by recommending the sublime shrimp and grits. They ended up chatting for more than an hour. When she went to pay, the waiter told her that her new friends had picked up the bill. “It was just such a moment of gratitude and feeling so connected to other people,” she says.

Not every talk with a stranger will end with a free meal, job, or friendship. “But,” says Singh, “if you’re not practicing that skill, you will never be able to find out if that’s a possibility, right?”

Giving back can be meaningful for your community and for you.