Hands-On from Day One 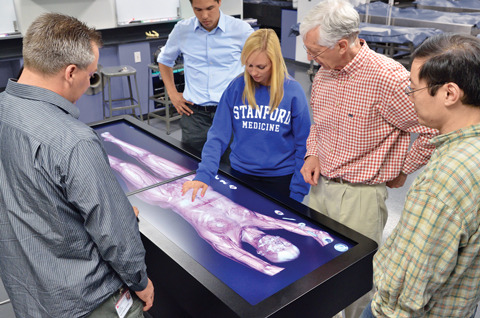 THIS WON'T HURT: Students can perform 'dissections' on the Anatomage Table and practice invasive procedures on mannequins. (Photo: Courtesy Anatomage, Inc.)Medical knowledge has exploded over the past 100 years, but until recently, “Medical students around the world were being taught roughly the same way they were when the Wright brothers were tinkering at Kitty Hawk,” says Charles Prober, senior associate dean of medical education.

All that has changed in the past five years at Stanford, where experiential learning, virtual reality and the online space are being blended with traditional classroom pedagogy to help information “stick” with students more quickly and effectively.

“We want to keep the flame burning brightly for medical students by making their education feel more relevant from their first day of medical school,” says Prober, who has been a leader in changing the way Stanford delivers content to learners.

Some of the most literally cutting-edge advances can be found in the anatomy lab. Take, for example, the Anatomage Table, a life-size multi-touch screen that allows students to “dissect” a virtual human body by moving through layers of tissue or using a virtual knife to cut away and see the structures inside.

Then there’s the zSpace display, a virtual holographic screen that makes anatomical models pop into 3-D through a head-tracking device. Using a stylus, students can “take apart” the models, viewing labels and annotations as they do so.

Particularly impressive is the Oculus Rift VR, a headgear apparatus that lets the student virtually fly through the body as if on a Disney amusement ride, with a guide providing narration. (See feature on VR in this issue.) Currently, ear and hand/wrist tours are given, but journeys to any part of the body will soon be possible—and such virtual rides are also accessible online and through mobile devices.

At Stanford, novel pedagogical technology traces back to 1948, when Professor David Bassett, ’34, MD ’39, began working with William Gruber, the inventor of the View-Master, to create a stereoscopic photographic atlas of human dissection that became all the rage in medical schools and is still in use.

The atlas started as 1,547 color images in 23 hardbound volumes, accompanied by 221 View-Master reels. The collection went online in 2008. Today, “Working in collaboration with gaming companies, we’re repurposing some of the older content and creating new imagery in a far more advanced form,” says Sakti Srivastava, division chief of clinical anatomy at Stanford.

Stanford has also been a pioneer in creating simulated environments and scenarios to help students put their lessons to work. Five years ago, the School of Medicine opened the Li Ka Shing Center for Learning and Knowledge at Stanford. In the basement of the 120,000-square-foot building is a simulated hospital, complete with emergency, treatment and hospital rooms that enable students to learn about patient care. 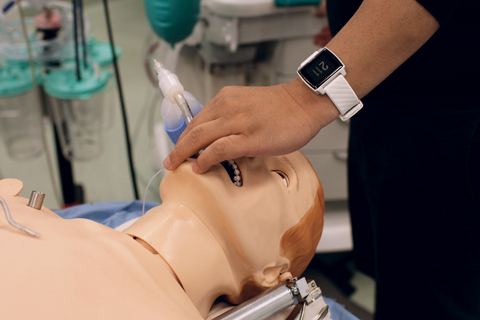 PRACTICE: Students learn invasive procedures using mannequins. (Photo: Courtesy Goodman Immersive Learning Center)“We’ve moved from having undergraduate students just read about how to do something to having them actually perform procedures, exams or diagnostics,” says Larry Chu, MD ’99, MS ’06, associate professor of anesthesiology. Practicing on actors hired to be patients, students learn how to give physical exams. Using mannequins, they learn more invasive procedures, such as how to put a central line into an artery through a patient’s neck using ultrasound and needles.

Students also learn how to work effectively in teams, as they simulate the quick mobilization of a room for CPR when a patient’s heart stops. At the Goodman Surgical Simulation Center, surgical residents practice procedures on lifelike dummies before they ever slice into human skin.

“This allows students to safely make all the mistakes they need to really learn to become clinically competent,” says Prober.

The development of online learning modules has opened up more time for such live, group-based explorations. The school is increasingly moving away from the traditional lecture hall, which takes up a good deal of faculty time, in favor of the “flipped classroom,” where short, sequenced video lectures and demonstrations, available online 24/7, support in-person teaching.

The advent of the digital world has also meant that students are not required to memorize volumes of facts as they once were. “Knowledge is no longer trapped in books but is literally at one’s fingertips through the tap of a device,” says Chu. “Millennial learners are experiential learners.”

“I started medical school at Stanford in the fall of 2012, just as they were implementing the flipped classroom in the preclinical curriculum,” says Zahra Sayyid,  ’12, an MD/PhD student in neuroscience. “In our biochemistry course, for example, we watched premade videos created by our professors that taught us the basics prior to each classroom session.

“Then, in class, we’d work in small groups by taking the basic information from the videos and applying it to practical, clinical scenarios. So, instead of simply memorizing pathways without really having a sense of why these pathways were clinically relevant, we could much more easily solidify our preclinical knowledge with realistic clinical scenarios that clearly showed the implications of what we were learning.”

Thanks to the Internet’s reach, the school has been keenly involved in more global education efforts. Supported by the Robert Woods Johnson Foundation, for example, Prober has rallied several U.S. medical schools to develop videos on microbiology and infectious diseases. This content is shared across these schools; there are plans to distribute more nationally and globally.

Chu has led 13 institutions and hundreds of academics to create course content in anesthesiology that more than 40 percent of residents in the field nationwide are using. Srivastava is involved in Stanford-based digital technology projects that are serving learners as far afield as Africa, South America and Asia.

Chu also created Stanford Medicine X, which for the past five years has hosted conferences exploring how emerging technologies will advance the practice of medicine, improve health and empower patients to be active participants in their own care.

What academia can do about the migration crisis.