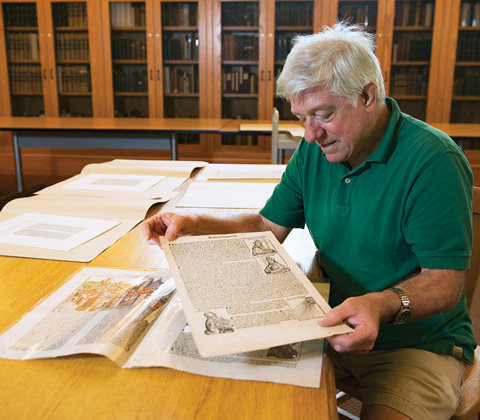 Tucked back in a sunny corner of Green Library’s Bing Wing, the Barchas Room contains many books on science milestones among its 4,000 volumes. But one morning in August, rare books curator John Mustain rolls a cart of gray storage boxes through the room’s double doors to examine a very different sort of collection, one of the library’s latest acquisitions: a series of hand-printed papers dating back to the era of Johannes Gutenberg, inventor of the printing press.

Mustain carefully lays the boxes on a wooden table. The papers inside are the gift of a couple, Donn Downing and Letitia Sanders, who jump-started their collection in 2000 and in the years since grew it to 700 leaves. Some were printed as early as the 1460s. Mustain guesses that most had been bound into books that were damaged over the centuries, and were later pulled out and salvaged, as is common practice. Included with the papers was a massive spreadsheet accounting for every page, including details such as the author, the printer, and when and where each leaf was printed.

“I’ve never collected anything with such detail,” Mustain says. “Even the baseball cards of my youth!”

He thumbs through the register, which shows that most of the leaves are in Latin, but the collection includes leaves in Greek, Hebrew and vernacular languages. “Look at this,” he says, pointing to an entry. “Second printed Spanish Bible . . . My goodness.” Many of the leaves originated in Venice, the center of the Renaissance printing world, and the texts span millennia of Western thought, featuring authors from Aristotle to Aquinas. Several of the printers represented in the collection were famous in their own right, such as Aldus Manutius, the first printer to use italic type and the inventor of the semicolon.

But “there are people in here I’ve never heard of,” says Mustain; that’s one reason he expects the collection to be of great value to scholars. Historians still know relatively little about the extent of the early printing community, or even what its members thought was worth printing, aside from Bibles and a few other classics. This collection could help fill some of those gaps.

Mustain opens one of the boxes and removes several leaves. Framed in protective acid-free cardstock folders, the handmade papers looked hardly worn, considering their age. Looking over one sheet’s intricate black type, Mustain reflects on the tedium of carving type molds for each individual letter. He holds it up to the light, observing watermarks and lines from the production process. The paper feels stiff and fibrous, like a thick dollar bill. That sturdiness helped it survive so long; it also means students will be able to handle the documents. Several professors have already contacted Mustain about using the collection this fall in classes, some to demonstrate the transformation of printing—a process intimately tied to the development of modern civilization.

The leaves “show how these texts get passed down to us, today,” Mustain says. “It’s just unbelievable, isn’t it?”