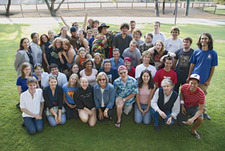 Yes, she was the one who held the key to the Band Shak all year. And yes, she had to open the door and let the musicians in whenever they wanted to practice.

But associate dean for student affairs Chris Griffith says there was no expectation that she would go everywhere the Band went, in her role as co-chair of the Band Reinstatement Committee. She only ended up sitting next to them at games in Maples Pavilion, on metal bleacher risers, because she wanted to.

It's the sort of contribution above and beyond the call that is referred to in the certificate Griffith received at Commencement, along with the 2007 Kenneth M. Cuthbertson Award for Exceptional Contributions to Stanford University. She's now achieved a campus trifecta, having won the 1997 Amy J. Blue staff award and the 2003 Margaret Ann Fidler Award for Distinguished Service in Student Affairs.

As she starts her 28th year at the University, Griffith is still having her own quiet laughs about the academic year just ended. The first time she showed up with the Band for a women's basketball game, for example, was a little awkward. "I was like, okay, so people are probably wondering, 'What's the old woman doing in the stands? Is she, like, a groupie?' But after a while, I thought, 'Who cares what they think? I'm here. It's fun.'"

On Big Game day, Griffith was up early to buy Hobee's coffee cake for the Band's trip to Cal. She also brought extra blankets, card games and board games, knowing the Band would have to sit in the bleachers for hours between their 8 a.m. rehearsal and kickoff. Small wonder Band members gave her a standing ovation when the Cuthbertson was announced.

Griffith's career on the Farm, which began in 1980, has seen her move through a succession of offices and titles, from assistant director of graduate residences to director of graduate residences, associate dean of graduate student life and acting dean of students. She currently directs the Graduate Life Office, which, she emphasizes, is a team effort, working alongside assistant deans Laurette Beeson, Andy Hernandez and Ken Hsu. "This year wouldn't have been possible without them filling in—a lot."

Griffith found her first job at Stanford at a time when there were too few jobs for newly minted teachers in California classrooms. But her career path likely was defined by a summer job she had when she was 21 years old. Covering Ottawa County in northern Ohio as a beat reporter for the Sandusky Register, Griffith checked in daily with the sheriff's office and wrote bylined articles on court hearings. One day she received a handwritten letter from two 9-year-old girls whose friend had died when she touched a live wire in her flooded backyard.

"I wrote a story about it because I thought it might help to get something done, and it did get addressed," she says about the standoff between homeowners and county officials that had created the tragic circumstances. "It was a really good lesson about responsibility and contributing and being accountable. And about to whom do we owe responsibility? Who needs help—those who may not have the political power that others do—to effect change? It was about all that, and it was about the death of a really young girl who shouldn't have died."

Griffith flew her mother out from Ohio for Commencement, and she says she was thrilled to receive the Cuthbertson. But there also was that shining moment after the conferral of degrees when Griffith leaped onto the stage, chased down conductor Bryan Schell, swiped his baton and directed the Band for perhaps 20 seconds—something she'd been wanting to do for months. "I saw the looks on their faces, and it was so wonderful. I hope I can remember it for a long time."

A New Approach to Nature Shows