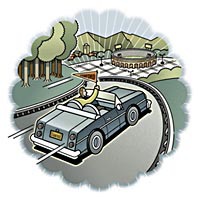 My old college roommate, now living in Atlanta, won’t be flying out to the Stanford-Notre Dame game as planned. Two other buddies were supposed to come, but they had to call it off, too. Now three tickets will be sitting at the will-call booth unclaimed.

I’d like to go. The boys on the team will need me there screaming my fool head off as they take on the Fighting Irish. But it’s also on TV. Should I drive four hours to Stanford for a game that’s free on the tube?

The answer, of course, is yes, absolutely. We’re talking big-time grudge match here—thousands of fans railing against the team that whomped us 31-7 last year after luring away our winning coach. Our boys will need all their supporters screaming their heads off at this game. It’s the least we can do for them.

I know; I was one of them. I’ve still got the crooked finger to prove it. I dislocated it in practice back in ’59 when that fullback dragged me 10 yards, my left hand locked in a death grip on his pants as my fingers twisted into pretzels. That was the day I finally quit the team. A state championship player in high school, I had come to the Farm dreaming of football glory; but in 3 1/2 years marked by a succession of injuries, I never played in a game.

Is it because my dream fell flat that I now live and die every Saturday in autumn with the fortunes of the Cardinal football team, experiencing vicariously what I had hoped to experience for myself?

I love going back to those games, wandering among the hundreds of tailgate parties surrounding the stadium, watching people picnic under the eucalyptus trees by Sunken Diamond and Angell Field, where the same chin-up bar I used in the Fifties still stands. (Maybe I’ll crank off a few for old times’ sake.) A flood of memories overtakes me every time I step onto campus. Fall and football ... then the winter rains, gradually filling Lake Lagunita ... and the warm, lush spring, with students lounging on the boathouse deck, studying, sunning, paddling little canoes around the lake.

Before a football game, people line up along the path leading from the gym to the stadium as the players emerge from the training quarters for their traditional quarter-mile walk to the stadium. Serious, the players are, game faces firmly on. Warriors ready for battle. The tension is heavy, like a typhoon building in the Bay of Bengal. I try to sense their mood. Is this their day? Can they do it? They tower like mountains, monoliths. They look straight ahead, concentrating on business. Faces in the crowd project ancient visions of glory onto the gladiators filing by in the lull before all hell breaks loose. The crowd is hushed. They respect them, are in awe of them. Hell, I’m in awe of them, and I was them. That was way back in the distant past, and I was way down in the depth charts (a foreshadowing, perhaps, of my career as a deep-sea diver), but yes, I was there, sacrificing my pitiful little body.

What is the power this game holds over us? Is it some kind of holy crusade? An offering of the self for a greater cause? Is it saying I’m more than my body, more than my limitations of pain and exhaustion and fear of an opponent bigger and scarier than my worst nightmare?

On those warm fall days under pale blue skies, as crimson players glide like ballerinas through the gilded afternoon, we’re all cheering for eternal youth. Inevitably, shadows darken and lengthen across the stadium floor, and the game builds to a heart-bursting finale that either vaults us into ecstasy or tramples us into the dirt.

Let’s face it. I will be up in the stands for the Notre Dame game, and I’ll be up there when I’m 90 years old, a total derelict, tubes and wires hooked into every orifice of my body, intensive-care nurses hovering around my ravaged carcass like vultures as I hoot the boys on one more time. That’s the way I want to go, right there, midway up on the 50-yard line, my final whoop dissolving into a death rattle as the boys upset the Irish—or Trojans, or Huskies, or Bears—at the gun. 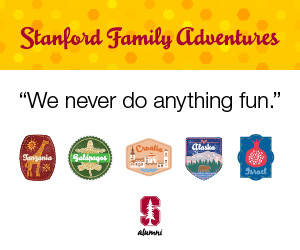