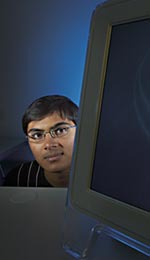 Last summer, Ankit Fadia delivered more than 100 seminars on computer security to CEOs and government officials in India, Singapore and Australia. He has foiled hacker attempts and worked with spy agencies to identify threats. His third book, Network Security: A Hacker’s Perspective, came out last year. But this fall, the Stanford freshman is taking Introduction to Computer Science.

A native of New Delhi, Fadia could get any job he wanted in India, where he’s so well-known that people stop him in McDonald’s. He made his name promoting “ethical hacking,” breaking into computers and then warning security experts about weaknesses in their systems. He wrote his first book at age 14.

At Stanford he is spending his days like any other Branner frosh, with a few exceptions. For example, he’s already hacked into Axess, the University’s grade server. Fadia emphasizes that he only located security holes in Axess; he didn’t exploit them.

Although he hasn’t let on that he’s a world-renowned hacker, says Fadia, students in his dorm quickly found out. It had a predictable result. “They won’t let me touch their computers.”

Adapting to a New System