It all began with a standoff between Jane Stanford and David Starr Jordan. Of course. 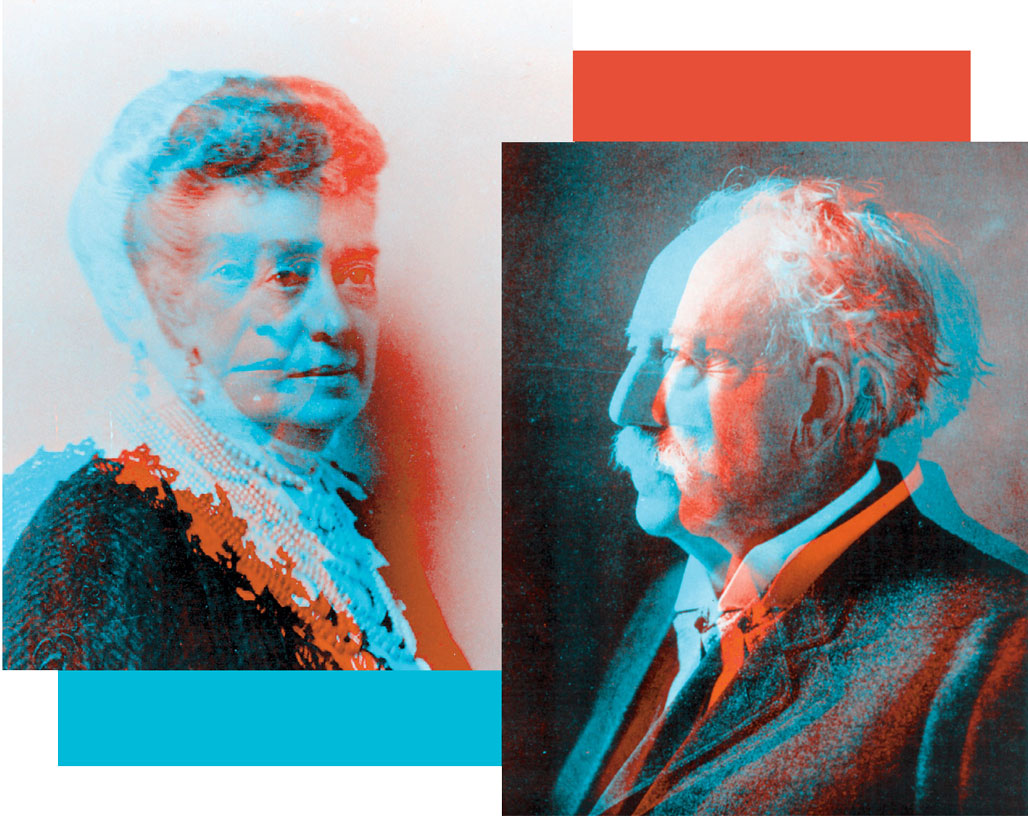 The imperative to delineate academic freedom in the United States originated at Stanford, although not in the principled way you might imagine. Between 1896 and 1900, an economics professor named Edward Ross came under scrutiny from Jane Stanford, possibly for the political position he took on silver monetary policy, but more probably because of his criticism of Asian immigration and labor, given that the latter underpinned the railroad wealth that had enabled Leland and Jane Stanford to establish the university. (Lest you detect a whiff of principle, Ross grounded his objections in xenophobic rhetoric. “He was a racist,” says former Stanford provost John Etchemendy, PhD ’82.) In any event, after some years of pressure, Jane Stanford persuaded the university’s first president, David Starr Jordan, not to renew Ross’s annual contract.

It created an uproar. Five faculty subsequently resigned—one under pressure from Jordan for questioning Ross’s dismissal, and four in protest of that. One of those, Arthur Lovejoy, would go on to co-found the American Association of University Professors, which, in 1915, released a “Declaration of Principles” that led universities nationwide to adopt common practices on tenure and academic freedom. Its 1940 update remains a guiding force in American higher education to this day.

Stanford’s current academic freedom statement was adopted in 1974, in the wake of disciplinary hearings that culminated in the dismissal of a tenured faculty member, a singular event in the university’s history. Associate professor of English H. Bruce Franklin, PhD ’61, was brought before the faculty advisory board on charges that his campus antiwar speeches had incited lawbreaking and violence. The most serious concerned the events of February 10, 1971: First, Franklin urged students and others to shut down the Computation Center, then-president Richard Lyman wrote in his allegations, disrupting university operations, including Stanford Hospital. (Franklin says the center was running a government program related to the war effort.) After police cleared the building, Lyman wrote, Franklin incited protesters to disobey orders to disperse. Later that night, during a speech in the Old Union Courtyard, he encouraged the crowd to “make people’s war.” As was typical during Stanford protests over Vietnam, rocks were thrown and fires were started. As was much less typical, two young men were wounded by gunfire. 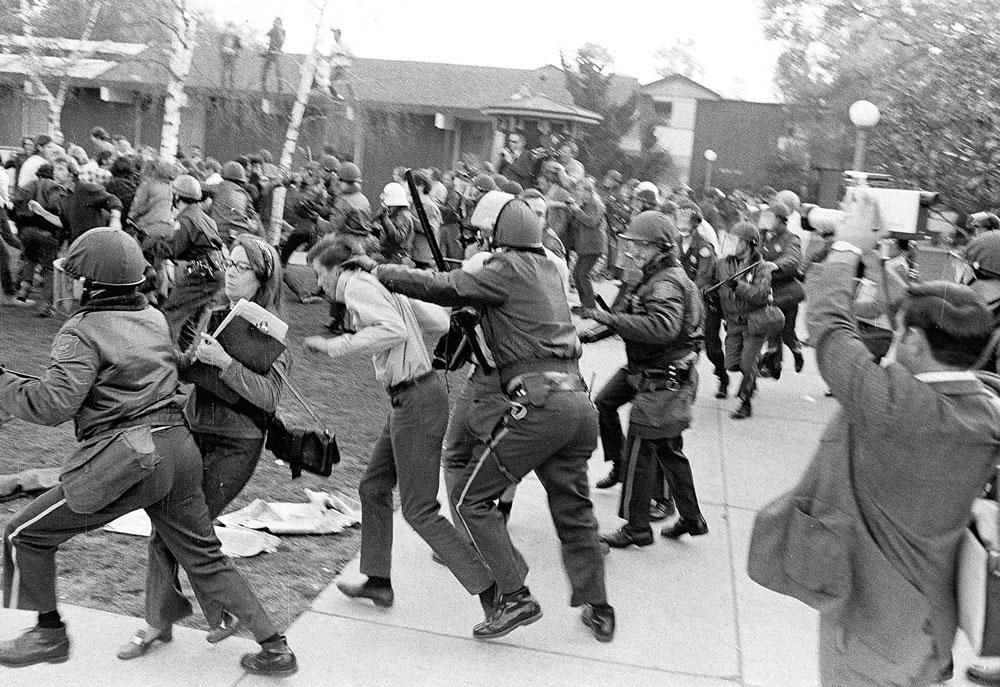 Franklin’s disciplinary hearings, which lasted six weeks and whose transcript surpassed 5,000 pages, were star-studded: Donald Kennedy, who would go on to become the university’s eighth president, presided over them in his capacity as advisory board chair; Ray Fisher, ’61, LLB ’66, later a Ninth Circuit judge, represented the university; future New York City schools chief Joel Klein assisted Franklin; and Harvard Law School professor Alan Dershowitz, then a young visiting scholar, supported his case in a brief with the ACLU. In his memoir, A Place in the Sun, Kennedy describes the hearings as also chaotic: Some of the 111 witnesses showed up in costume, and Franklin perused Chairman Mao Zedong’s Little Red Book during lulls in testimony. Dershowitz remarked afterward to the New York Times that he would not have chosen to decorate the defense table with a portrait of Stalin.

And they were consequential. The advisory board rejected the first charge—disrupting a campus speech by former ambassador to Vietnam Henry Cabot Lodge, forcing its cancellation (“I heckled him twice,” says Franklin)—but found Franklin responsible for the incitement charges pertaining to the Computation Center and Old Union, voting 5–2 to dismiss him from the faculty. Religious studies professor Robert McAfee Brown, who along with Kennedy preferred a one- or two-quarter suspension to outright dismissal, explained his thinking in terms of intellectual pluralism. “Stanford University will be less a true university without [Franklin] and more of a true university with him,” Brown said. “I fear that we may do untold harm to ourselves and to the cause of higher education unless, by imposing a penalty short of dismissal, we seek to keep him as a very uncomfortable but very important part of what this university, or any university, is meant to be.”

‘I now realize that the Franklin case was influential in reshaping the faculty’s view of its own role.’

With the help of the ACLU, Franklin challenged the decision in court, where the Old Union charge was thrown out. It would take until 1985 for the case to wend its way through the courts, back to the advisory board, which confirmed that dismissal was appropriate based solely on the Computation Center charges, and back to the courts for a final decision on appeal. Meanwhile, the dismissal had real consequences for Franklin’s career. He says he found himself “blacklisted” from academia for three years, enrolling in a horticulture degree program at the College of San Mateo before landing a tenured position at Rutgers University–Newark.

Franklin flourished at Rutgers, writing books and articles on topics ranging from science fiction to Vietnam to prison literature to the overfishing of an unsung, ecologically valuable forager called the menhaden. “American studies is really my field now,” says the onetime Melville scholar, now 87 and living in the East Bay. “Probably my firing at Stanford was good for me. I loved being at Rutgers, especially the Newark campus.”

In his memoir, Kennedy, too, brought the benefit of hindsight to bear on the decision. At one point, “I thought I had wasted half a year of my life,” he writes. “I now realize that the Franklin case was influential in reshaping the faculty’s view of its own role. . . . As I later wrote, this case and others like it proved that ‘faculties can take hold of the values of their institutions, defend them successfully, and make a reality of the vision of the academy under even the most stressful challenges. The Franklin verdict, whether one agrees with it or not, represented a triumph of due process.’ ”

We live in a world where one person’s disinformation is another person’s truth. But the university’s free exchange of ideas can sharpen the picture.

The campus policy institute began as a war archive founded by the 31st president.