For Football, a Fresh Start

And a quarterback's debut.

Andrew Luck is a good name for an up-and-coming athlete: Headline writers will overuse and over-pun his surname for as long as Luck is newsworthy. And that means the best result for Stanford, hoping for a football breakthrough with Luck at quarterback, would be four years of good gridiron play and commensurately bad wordplay.

No real fan will complain about the season-long repetition of, say, "Stanford Wins with Luck." It also will be fine if teammates dominate the spotlight and triumph still ensues. But as this season got under way, with four victories and one loss, the Cardinal's fortunes were getting a boost from the extra offensive oomph provided by Luck, a redshirt freshman with a quarterback heritage.

Luck's father, Oliver, was a star QB at West Virginia University and a second-round NFL draft choice for the Houston Oilers. He spent five years with the Oilers and went on to become a lawyer and sports executive. He's now president of a Major League Soccer team, the Houston Dynamo. 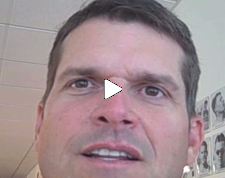 VIDEO: Stanford football coach Jim Harbaugh talks about the process of transforming senior Richard Sherman from a wide receiver to a cornerback.

That kind of family history makes Andrew's potential all the more intriguing. But there's no confusion about how that potential is supposed to be developed. "He's the father; he does the dad work," notes Andrew. "He lets the coaches do the coaching."

Stanford coach Jim Harbaugh decided Luck (6-foot-4, 235 pounds) was far enough along his learning curve to install him as the starter over senior Tavita Pritchard (6-foot-4, 210 pounds). There was on-field evidence, such as the five touchdown passes Luck threw in the spring game scrimmage. Moreover, his practice work showed off a rifle for an arm, as well as the ability to direct the ball with finesse. That really just left one issue: How would he play in an official game, when the stakes went up considerably?

"What will he do in a game? Can he take a hit? How will he react at game speed?" Harbaugh ticked off those thoughts after an opening 39-13 win over Washington State, conceding they inevitably cross the minds of coaches and teammates before an untested player makes his debut. The answers all turned out to be in the range of not bad to pretty good, and Luck even talked with relish about the first whack he took. He needed that jolt, he said, to feel fully immersed in the action after not having been hit since his senior high school season in 2007. He said much the same thing after game No. 2, a 24-17 loss to Wake Forest.

"It's a contact sport," says a smiling Luck. "Part of you wants to get hit and stand back up and go on to the next play."

That's a classic football mentality, and it requires another family member—someone Luck keeps mentioning in assorted little anecdotes—to summon up a steady measure of emotional toughness.

"To be honest," wrote his mom, Kathy, in an email, "I really don't like the physical aspect of football, and I cringe when anyone gets hurt—like most moms I'm sure—but I've never tried to influence Andrew not to play, mainly because he enjoys it so much."

After his first five games, Luck's stats were more than solid, ranking him second in the Pac-10 in pass efficiency. But the flashiest offense had been supplied by star runner Toby Gerhart, '10, and kick returner Chris Owusu, '12. Plus, the biggest hurdles for Luck and the Cardinal, including USC, were yet to come.

Luck acknowledges that he, and to an extent the entire team, is getting a game-to-game education. But he's conceding nothing about what that means for immediate results.

"I don't look long-term," he says. "I think it'll be a big disappointment if this isn't a winning season."

The big idea is to grow a full-scale produce operation.