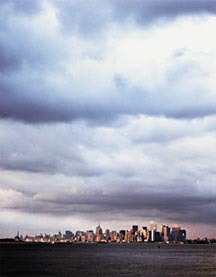 Three thousand miles and three time zones west of the terrorist attacks in New York and Washington on September 11, Stanford was shaken, too.

The University awoke to a world on fire. Before most Stanford offices had even opened, the twin towers of New York’s World Trade Center lay in smoldering ruins, the Pentagon was ablaze, thousands were dead, and President Bush had been spirited to a bunker somewhere in Nebraska. Throughout campus, work was forgotten as people clustered around radios and televisions watching and listening to news reports in somber silence.

It didn’t take long for threats of violence to reach the Farm. At 9:35 a.m., Stanford police received a message from a male caller who said, “Hoover Library will be gone in an hour.” Police immediately evacuated the Lou Henry Hoover building, the Hoover Memorial, Hoover Tower, Meyer Library and Green Library. No bomb was found, and the buildings reopened three hours later.

At noon, hundreds of students, faculty and staff gathered in Memorial Church for a vigil and prayer service. President John Hennessy joined other impromptu speakers during the ceremony to express support and sorrow. “I ask that you keep in mind those whose lives have been affected by this tragedy,” he said.

By early afternoon, a swarm of prospective blood donors filled the waiting room at the Stanford Blood Center on Welch Road and overflowed into the courtyard. Center spokesperson Michelle Gassaway said 400 units were collected and sent to Sacramento for eventual shipment to New York. Over the next few days, hundreds more people donated blood and called to make appointments.

Meanwhile, the Medical Center was dealing with problems of its own. A 5-year-old girl scheduled for a liver transplant was put back on a waiting list when the FAA shut down all air traffic, preventing delivery of the donated organ in time for the operation. And on Thursday, two days after the terrorist strikes, a bomb threat forced the partial evacuation of both Stanford Hospital and Packard Children’s Hospital. The emergency room was temporarily relocated while police scoured the facilities, but no bomb was found.

All intercollegiate athletic events through September 15 were postponed or canceled. “The games are insignificant,” said athletics director Ted Leland, PhD ’83, on September 12. Stanford’s football game against San Jose State, scheduled for September 14, will be played December 1. Also postponed were the first two stops on Stanford’s “Think Again” tour, a 12-city road show highlighting undergraduate education. The Seattle visit was rescheduled for January 12 and the one in Orange County for May 18.

Because the attacks occurred just eight days before freshmen and transfer students arrived on campus, University administrators worried that some might not make it on time. All but five of the 1,717 new students did—similar to past years, according to director of residential education Jane Camarillo. But for parents dropping off their sons and daughters, the goodbyes seemed more difficult. And New Student Orientation, normally an unabashed celebration, took on a more serious tone this year. “Orientation can be a surreal experience, meeting hundreds of people and spending intimate time with them,” says senior Sarah Koehler, the head peer-advising coordinator for Ujamaa in Lagunita Court. “This year it seemed almost irrelevant because of what had happened.”

But Koehler and the other residence staff members were grateful for the incoming students’ sense of solidarity. “Two guys at Ujamaa—one is a very religious Jew and the other is Muslim—spoke at the ‘Faces of the Community’ program on September 23 about being best friends, and we had some amazing conversations back at the dorm after that,” she says. “People really opened themselves up and talked about how they wanted to curb any hatreds or prejudices that are based on false assumptions.”

That same sense of community was evident on September 14, declared a national day of prayer and remembrance by President Bush. Thousands descended upon the Inner Quad for a memorial service, which opened with an introduction by Dean for Religious Life Scotty McLennan, followed by a Muslim call to worship. Then members of the Jewish, Catholic, Protestant and Hindu faiths each sang or chanted a prayer, each bracketed by a moment of silence. Finally, a Buddhist struck a sounding bell several times.

As the crowd quietly filed out of the Quad, one young man turned to another. “This is our Pearl Harbor,” he said. “Our lives will never be the same.”

What Matters Most When Things Go Bad

Getting Down to Earth