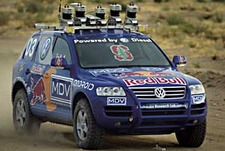 In the not-so-distant future, driverless cars may run reconnaissance missions behind enemy lines and whisk commuters to and from work; but last summer, in a dusty corner of southwestern Nevada, Stanford roboticists were just hoping to get theirs to tell the difference between a shadow and a saguaro cactus. Computer science associate professor Sebastian Thrun and two colleagues—postdoctoral researcher Mike Montemerlo and graduate student David Stavens—had gone to the desert to fine-tune algorithms that would allow a three-ton SUV to navigate narrow dirt roads and avoid obstacles without any human guidance. The car, nicknamed Stanley, was Stanford’s answer to the DARPA Grand Challenge.

Congress in 2000 mandated that unmanned vehicles make up a third of the U.S. military’s ground force by 2015. To stimulate innovation, the Defense Advanced Research Projects Agency offered a $1 million prize for the creation of an autonomous vehicle capable of completing a 100-plus-mile course in 10 hours or less.

More than 100 teams from around the country stepped forward. In March 2004, the top 15 contenders met in Barstow, Calif., for the first Grand Challenge race. The 142-mile route ended in Primm, Nev., 40 miles south of Las Vegas. But most of the competitors never made it out of the starting area: one car’s brakes locked, one car crashed into a wall, one got tangled in some wire, and one just drove in circles. The entry from Carnegie Mellon University’s Red Team, a modified military Humvee dubbed Sandstorm, made it the farthest, traveling 7.4 miles before it got hung up on a berm and its front tires caught fire.

The race was a big disappointment for researchers in Stanford’s artificial intelligence laboratory, who had not entered a vehicle but hoped the race would be a showcase for advancements in robotic engineering. When a second Grand Challenge was announced for 2005, this time with a $2 million purse, Thrun, who had recently joined the AI lab as director, saw an opportunity for the Cardinal to shine. He put together a team and negotiated a partnership with Volkswagen, which donated two Touaregs and the use of repair facilities at VW’s research laboratory in Palo Alto.

To succeed in the race, Stanford engineers would have to develop a navigation system that could keep their car on the road, recognize and avoid obstacles, and select speeds appropriate to the terrain. Thrun enlisted 20 Stanford graduate students via a hands-on course, CS 294: DARPA Grand Challenge. “The strongest part of Stanford is the student body,” he reasoned. “They have so much creative energy.”

On December 1, 2004, the class caravanned to the Mojave Desert to test the system they’d built from the ground up. With a dozen cars trailing, and students leaning out of windows cheering him on, Stanley drove the first 8 ½ miles of the 2004 Grand Challenge course autonomously.

But there was a long road ahead. The following months brought several key breakthroughs, the most important being the vehicle’s visual system. Five laser and radar rangefinders and a video camera mounted on the roof serve as Stanley’s eyes. The lasers could accurately identify the road’s borders and pass that information to the onboard computer, but their range was just 100 feet, not nearly far enough to maintain a steady speed and still avoid trouble. So the researchers taught the computer to compare the laser data to video images to find road-like surfaces: that is, smooth, flat and free of impediments. As a result, Stanley viewed the world in a counterintuitive color scheme: everything in the scene that looks driveable is shaded red and areas to be avoided are shaded green.

In early May 2005, DARPA selected Stanford and 42 other teams as semifinalists. Thrun and his crew began spending weekends in the desert, putting their vehicle through rigorous tests. A bar called the Slash X became their base of operations. “We’d go there, sit in a booth, do some coding, go out and test, come back, do some more coding,” Stavens recalls. Stanley ran the entire 2004 course in July but had several incidents along the way, any one of which would have doomed its chances in the race. From then on, Thrun, Montemerlo and Stavens were in the desert full time, working to find and fix bugs. “It’s the weakest element of the robot that’s going to determine the success of the mission, not the strongest,” said Thrun.

Stanley and the backup vehicle, Stanlette, were treated to a new coat of blue paint at the end of the summer. “Red was already taken,” explains Stavens, referring to the Carnegie Mellon team. “So we became the blue team.” (The Cal entry didn’t make the finals.)

In late September the team got its first look at the competition, at the national qualifying event in Fontana, Calif. DARPA officials arranged hay bales, traffic cones and stacks of tires on a test course at the California Motor Speedway to simulate obstacles along the real race route. Stanley aced the test. After the car’s fourth flawless run, DARPA officials announced that he had made the finals.

The 2005 Grand Challenge course was a 132-mile loop beginning and ending in Primm, Nev. On Saturday, October 8, as the first rays of sunlight peeked over the Lucy Gray mountains, sleepy spectators filled the grandstands. The cars, seeded by race officials based on qualifying per­formances, were arranged in rows near the starting line. In the front was Stanley, flanked by Carnegie Mellon’s two vehicles, H1ghlander and Sandstorm. At 6:40 a.m., first-seeded H1ghlander received the “go” signal and set off to loud cheers from the crowd. Five minutes later it was Stanford’s turn. As Stanley turned left and headed into the desert, a sticker on the rear fender was barely discernible. It read “Drivers Not Required.”

By 10 a.m. the last vehicle had been launched. The teams gathered inside a large white tent where DARPA had set up flat-screen monitors for tracking the race. The vehicles appeared as colored dots overlaid on a satellite map of the route. By noon half of the vehicles were out of the race. Then, at around 12:30 p.m., Stanley began gaining ground on the leader. All eyes were on the monitors as the tiny dot representing the Carnegie Mellon Humvee momentarily stopped moving and Stanley’s dot inched ahead. “It was a pivotal moment for all of us,” says Thrun.

But the most difficult portion of the course, Beer Bottle Pass, lay ahead. The steep and narrow mountain road featured switchbacks and a 100-foot drop off a sheer cliff. In the tent, the monitors switched to a live satellite feed. Everyone edged forward as Stanley appeared on screen. He took the turns with such remarkable agility and confidence that it was hard to believe there was no human in the vehicle.

As he emerged unscathed, nothing but flat earth stood between Stanley and the finish line. A blue glint appeared on the horizon and the crowd began to chant, “Stan-ley, Stan-ley.” DARPA officials were parked at the finish to ceremonially press the remote control stop button as director Anthony Tether waved the checkered flag. But being the first vehicle to finish the race did not assure Stanford the victory. The staggered start meant that officials had to compare times from all the cars to determine a winner.

But the Stanford fans didn’t wait to celebrate. The team produced two enormous Red Bull cans filled with water and doused Thrun and Montemerlo, NFL style. The two were hoisted onto shoulders as people swarmed around them. Cameras popped and reporters jockeyed for position. The crowd grew quiet as Thrun leaned toward the nearest microphone and said simply, “We had a good day.”

Nearly 24 hours later Stanley was officially declared the winner—with a time of 6 hours, 53 minutes—and Tether presented Thrun with the $2 million check, a significant portion of which will be allocated for graduate fellowships in artificial intelligence at Stanford. But it was a shared victory for all of the research community. “Sebastian likes to say that really it was one team with a thousand people on it,” says Stavens.

And not one of them was behind the wheel.

GRETA LORGE, ’97, is an assistant editor at Wired magazine.