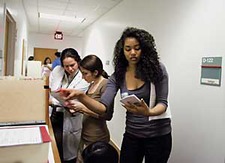 Christine Hironaka’s grandparents were interned at California’s Tule Lake Segregation Center, which held more than 18,000 Japanese-Americans during World War II. Growing up, the Stanford sophomore heard her family’s internment stories, and as recently as winter break she talked with one of her grandmothers about life in the forbidding Modoc County camp.

Hironaka plans to draw on her family history in declaring her major in the history department’s newest offering: an interdisciplinary public history/public service track. She enrolled in the gateway course, History 201: Public Service and History, when it was offered for the first time in winter quarter, and she hopes to find an internship at the Tule Lake site, which was designated a National Historic Landmark in 2006.

“As a major, you’re required to do an internship, and I’ve been brainstorming with Professor [Al] Camarillo about historical preservation projects,” she says. “He’s made a point of linking my own personal family history to the public controversies of internment—we’ve talked about it in class, and in office hours.”

Kelley Fong, one of Hironaka’s classmates in History 201, also has declared in the new major. Fong has volunteered at shelters for women and children in India with the Girl Scouts, worked as a volunteer at the Ohio Historical Society and attended a civil leadership institute run by the Johns Hopkins University’s Center for Talented Youth. As a freshman in 2005, she signed up for a “Poverty and Homelessness in the Bay Area” trip that was offered to incoming students. “I’m very interested in social activism and community service, but I don’t want to go into academia,” Fong says. “The new major allows me to do academic study that will prepare for nonprofit or governmental work.”

Camarillo, the architect of the public service track, brings both academic expertise and street credentials to the major. For years, he has taught a course on homelessness and poverty that requires community service, and he holds an endowed chair as the Miriam and Peter Haas Centennial Professor in Public Service. “By the time I finish my [Haas] tenure in July 2008, I wanted to make sure history had a public service component,” he says. “We’ve talked about institutionalizing it for years, and the only way is through the academic curricula.”

Service learning is broadly defined as an organized activity that meets an identified community need and offers academic credit. At Stanford, Camarillo’s course on poverty and homelessness is often cited as a model for programs that want to include a service-learning component. “That’s the example we talk about,” says Karin Cotterman, service-learning program director at the Haas Center for Public Service. “On Tuesdays, [Camarillo’s students] talk about their journal readings, and on Thursdays they talk about what’s happening at their service sites, and then they connect that to the academic readings they’ve been doing.”

Although the history department is the first to offer a public-service track, a number of interdisciplinary programs are looking for ways to incorporate service learning. Within the past year, Cotterman says, representatives of seven programs have contacted the Haas Center for help in getting started, including comparative studies in race and ethnicity, feminist studies, symbolic systems, human biology, public policy and urban studies.

“More students arrive at Stanford [today] with community service and service-learning experience,” Cotterman says. “This is coupled with more faculty members becoming aware that service learning as a pedagogy can deepen student understanding of academic content in their courses.”

The Haas Center can provide funding—typically $1,500 to $5,000—for up to three years to help faculty hire course assistants, compile a syllabus or pay for transportation to community sites. “I received a grant three years ago so I could create a service-learning class from a previous sophomore seminar I taught, The Human Side of Medicine,” says Haas faculty director Gabriel Garcia, a professor of medicine and associate dean of admissions for the School of Medicine. Students in Garcia’s course spend time at community health centers, working as screeners and health educators. The seed money, which was used to set up partnerships with community groups, was “very important to us.”

Garcia notes that there are between 80 and 85 classes that are offered each year—up from 60 two years ago—that would qualify as service-learning courses. As student demand for the classes increases, he hopes that academic departments and programs recognize their value, “eventually incorporating them into the fabric of the University.”

When Faculty Are Sidelined-And Love It