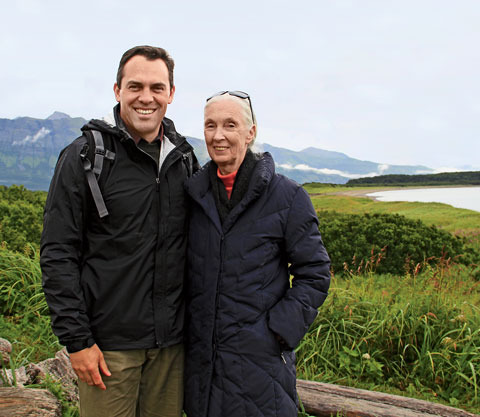 Paul Baribault's ascent to the head of a Disney film division may not have been preordained, but when he describes his childhood, it sort of sounds that way.

When Baribault's mother, a research librarian for Disney Animation, left her position after becoming pregnant with her son, some of the animators at the company drew an illustration of the stork from Dumbo, which they all signed, as a parting gift. It depicted a swaddled babe in its beak and hung in Baribault's childhood bedroom.

From time to time, Johnston gave Baribault rides around his property on his fully functional one-inch-scale train. Johnston and Thomas sent a congratulatory letter when Baribault was accepted at Stanford.

And that might have been the extent of the Disney influence had Baribault fulfilled a different dream: to be a member of the U.S. Olympic luge team. He had pursued the sport while studying at Stanford, stopping out periodically to compete internationally. But when he narrowly missed earning a berth on the 1994 Olympic squad, Baribault faced an identity crisis. If he wouldn't be an Olympian, what would he be?

For several months, he didn't know. "Then, all of a sudden when I was looking for an internship, I came across this one at Disney's Buena Vista Pictures Distribution," he recalls. The opportunity confirmed something he'd always known, at least subconsciously: "It's been Disney from the beginning."

His Disney gig began during the summer of The Lion King launch. Baribault and another intern, a film student, traveled throughout the Northeast, often to small-town theaters, to put a human face on the large company. The night before sitting for his last final exam at Stanford, he was on Alcatraz Island until 1 a.m. when Disney held an event to launch The Rock and, later, he organized a flyover as part of a massive gathering staged on the deck of an aircraft carrier to promote Pearl Harbor.

Today Baribault is vice president of marketing for Walt Disney Studios Motion Pictures. With a partner, he oversees all the marketing for all of the animated films and Disney Toons, as well as the Muppets. In that capacity he has helped promote and celebrate the success of films like Frozen—which earlier this year eclipsed The Lion King as Disney's most successful animated film ever.

He is particularly proud of work he's done that echoes back to groundbreaking filmmaking by Johnston and Thomas and the rest of the Old Men. 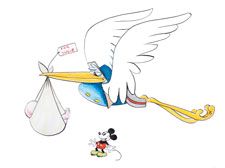 Back in the 1930s, when working on Bambi, the animators shot reference film of deer frolicking in the woods. (Though both Johnston and Thomas are known for the film, Johnston became particularly famous for the heart-wrenching scene when hunters shoot and kill Bambi's mother.)

"What they discovered in that process was that they were so entertained by the footage they shot, that they were making up stories," Baribault says. "They realized there was something there."

Their epiphany led Disney to make 13 documentary nature films in the 1940s and 1950s such as The Living Desert (1953), which depicted never-before-seen footage of animals in their natural habitat. The films earned many awards, including eight Oscars. However, Disney abandoned the format in 1960, opting instead for narrative live-action films that often featured animals in heroic roles, such as 1963's The Incredible Journey.

It wasn't until 2005 when French filmmakers released March of the Penguins that the studio revisited the subject of real-life animals in real-life situations. The huge global response to the tale of the emperor penguins' annual migration in Antarctica proved that there was plenty of drama in the wild to hold an audience's attention.

In 2008—the same year that Johnston died—Disney launched its first new branded label in 60 years, Disneynature. Baribault raised his hand to lead it.

"It's been a little label that I could grow," he says. "There was nobody chasing this. I was given the freedom to develop it . . . to see if I could make it successful."

Baribault's unique contribution to the franchise has been to design marketing programs in which a portion of each new ticket sale in the opening week is donated to conservation projects around the globe. The idea is that "the audience has to feel they are part of the success, that they are making the difference," Baribault says. "They have to want it. We [at Disney] are just enabling the opportunity. . . . As we got into it more, we realized it needed to never be about us. The audience needed to be the champion."

Legendary primatologist Jane Goodall partnered with Baribault and Disney in 2012 to promote Chimpanzee, the real tale of an orphaned baby chimp that was adopted by an alpha male—a phenomenon rarely seen in the wild.

"There's no question that the Disneynature films make a huge impact whenever they are shown," says Goodall, the world's foremost authority on and advocate for endangered chimpanzees worldwide.

During the first week after the release of Chimpanzee, Disney donated 20 cents from each ticket sale to the Jane Goodall Institute to help protect a 555-square-mile chimpanzee habitat in the Congo and to care for orphaned chimps. Thanks in large part to the institute's promotional efforts, those early ticket sales were strong, Goodall says.

"I'll never forget it," Baribault says of the exchange. "I happened to be having dinner that night with senior executives at an event, and my cell rang and it was Jane. We were both rejoicing with how amazing the opening weekend numbers were. She asked if, due to the success, we could consider extending to a second week, and I told her, 'It's such a great idea, I'm only embarrassed I didn't think of doing it first!' I had a quick conversation with my dinner table, and probably five minutes later called her back and told her we were in."

"That was lovely," Goodall says. "I was dancing around smiling."

Baribault crafted marketing programs around conservation efforts for the division's other films as well, all of which have been released on or near Earth Day. For the first film, Earth, in 2009, Disney committed to planting one tree in Brazil's Atlantic forest for every ticket it sold. In the first week of the movie's release, nearly three million people bought tickets. The final Brazilian sapling was planted in 2012 in cooperation with the Nature Conservancy. "It takes a long time to get that many trees in the ground," Baribault says.

For the 2010 film Oceans, Disney again joined forces with the Nature Conservancy to establish a 40,000-acre marine sanctuary for an endangered coral reef in the Bahamas, a first step toward creating a 600,000-acre zone. For African Cats, the company worked with the African Wildlife Foundation to connect three national parks in Kenya to set aside a 65,000-acre migratory corridor for animals. And for the upcoming Bears, about families of grizzlies in Alaska, Disney plans to contribute ticket sales to protect wildlife and wild spaces in U.S. national parks.

Not only has the Disneynature experience given the entertainment conglomerate new environmental credibility, but it also has changed Baribault's life in ways he hadn't expected.

"Everyone kept telling me it was going to be a lot easier if we just made a flat donation to an organization in support of the [films], but I didn't believe that was going to be meaningful to the audience," Baribault says. "A flat donation would never cause a family to turn to each other and initiate a conversation about the impact they were having by simply seeing the movie. With a young family of my own, that is a conversation I wanted to have with my daughters."

Baribault has been able to continue those conversations with his wife, Emilie Baribault, their three girls and with Goodall, who came to Southern California as a grand marshal of the New Year's Day Rose Parade in 2013. Baribault and his family, including his nieces and nephews, turned out in force to welcome and meet her.

"She's impacted me tremendously," Baribault says of Goodall, who turns 80 this year. "I was never the person in high school who was like, 'I'm going to go save the planet,' but as I see the power of media, the power of entertainment, I feel a responsibility that each of these programs be the best program."

"I think Disney is definitely leading a trend," Goodall says. "The great thing about Disneynature's films is there is such a big budget for them. This means that the films can go into details that other nature films can't and that the final film will appeal to a very wide audience.

"They've made that impact standing on their own, but when you have somebody like Paul who is so enthusiastic and markets the films so well," the impact is multiplied, Goodall adds.

Baribault says the passion of dedicated conservationists like Goodall motivates him. "I want to get these voices out there. I want to celebrate the work they are doing," he says. "We [at Disney] want to be a platform for them."

In Praise of True Student-Athletes

Leadership and success, on and off the field.