I wasn't really aware how much I had yet to learn about the world. On this day, a mother elephant made it clear. 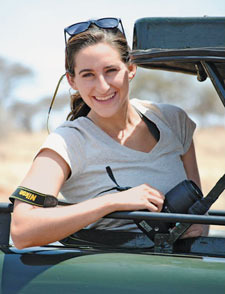 If you are returning from a Tanzanian safari in the midafternoon, keep your distance from the elephants that have wandered in front of your lodge. Then, swap your wide lens for a 200x zoom lens, as your photo-happy fingers will start itching within a few minutes. Finally, grab your Polaroid camera from your room so that you have a photo to tape into your travel journal.

On second thought, hold off on that last instruction. With my blue Polaroid in hand, I wandered along the perimeter, where the elephants were serenely chewing away at tree branches. My viewfinder, without a fancy zoom, continued to coax me to move just a few steps closer. Click. And just a few strides before my eyes, I found myself face-to-trunk.

A combination of confusion, awe and naïveté kept me in a sort of amazed paralysis, standing only feet away from the mother elephant. She flapped her massive ears, batting the air toward me, and huffed. Later I would learn that these were warning signs of a mock charge—she was determining whether I was a threat—but in my wide-eyed state, the only warning I understood was the urgent, half-whispered demand of a nearby lodge employee for me to back away.

This, more than any moment before it on the trip, awakened my senses. Before my two weeks in Tanzania, I had never traveled to, nor studied in, a place so unfamiliar to me. Here's something nobody tells you about learning in a different place: There is a good chance you won't be ready. After all, how can one fully prepare for the unknown? 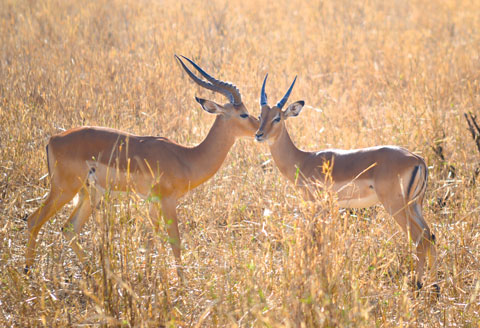 Along with two professors, 13 other students and about 30 alumni, I had traveled to Tanzania to study five national parks and the surrounding peoples—many of whom have been displaced from their centuries-old homes in order to make room for the protected areas. We spent our days in open-roof jeeps, traversing miles of multicolored savanna, passing zebras, giraffes, lions, gazelles and more. We spent our nights listening to each other's presentations, discussing how the government's enforced evacuations—from the same land we had marveled at hours before—had led to harmful consequences for both animals and people. It was conflicting to witness Tanzania's undeniable beauty and unfortunate realities each day.

In a lecture during our preceding week of preparation on Stanford's campus, Professor Bill Durham, '71, had advised us to "be humble" as we entered a new environment and community. My encounter with the elephant would be the first time that this lesson would ring through my ego. In front of that elephant, it didn't matter if I were Oprah or the queen of England, or how many books I had read over the summer about the Tarangire National Park. I was a visitor on another's land. 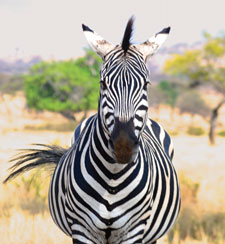 To me, learning humbly in a different place is linked with this awakening of the senses. For the fortunate, it's an eased opening of the eyes rather than a jolt to the senses. It's a joyful embrace of new sights, smells, tastes, facts, experiences. In Tanzania, I wondered at a baby monkey as it meticulously groomed its father's furry back with its hands and teeth. Thousands of flamingos colored the surface of a stretching lake. During our 6 a.m. safari drive, birds awoke with us as the watercolors in the sky performed a dance of transformation.

Yet learning humbly also entails coming to terms with the limitations of being a foreigner. I had to accept the boundaries, the literal lines I should not cross for my own safety as well as the underlying limits of what I can experience as only a passerby. My challenge, I discovered, was to embrace the unknown without demanding of it what I could not know.

I thought of this as I watched a Maasai man, a member of a historically displaced group, speak to us the next day at his boma, his family's huts. In English, he explained how the Maasai's prosperity centers on the number and well-being of their cattle, their form of currency. As a seminomadic and pastoral people, the Maasai are dependent on land and natural resources, including wildlife, water and grazing grounds. Without access to the numerous rich resources in relatively young protected areas, Maasai and other displaced people face degradation of their grasslands, declining cattle numbers, hunger and poverty.

This man, the only fluent English speaker in his boma, stood apart from the rest of the village members. A few men stood nearby, and all the women stood together beyond them. Brightly colored beads encircled the women's necks and looped up their arms, in which babies were curled. 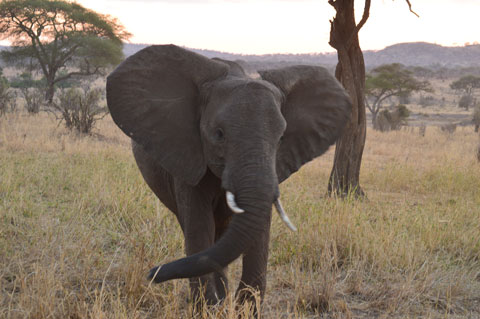 I realized that I could not know all the details of their lives and culture—and thus, I was in no position, really, to offer solutions to many of the issues we were studying.

Upon returning to the Stanford I know well, and thinking to the unknown that lies ahead, my visitor's lens remains intact for both. I navigate familiar hallways and topics with new questions, and I reach for my blue Polaroid camera with a sense of my limited view.

Jenna Shapiro, '17, is majoring in science, technology and society with a minor in art history. She hopes to work in journalism or communications and to continue to story-tell around the world.

How jumbo squid use color to communicate.